I’m actually not sure where to start, so I think I am going to have to try and start at the beginning. It was June of 2008, and I had broken my clavicle about 6 weeks earlier. I was training hard for a race season that never materialized, and riding outdoors with my broken collarbone about a month too soon. I had taken Cadence Class on Thursday night, did a heavy leg workout in the gym the day before, and I was enjoying a beautiful June ride by myself when something weird happened. I was pushing, as I always did, at the end of a 3 hour ride back to Philadelphia on the bike path. My heart rate had been averaging about 145 and my power was in the endurance zone, but for about a minute and a half both had climbed as I made an effort. All of a sudden a felt this flutter in my heart and I felt overwhelmingly weak. What had just happened? This weakened state lasted for over 5 minutes while I struggled to maintain my power output, and by the time it was over I was in Manayunk eating an Italian water ice. It was unsettling. But I was eating my favorite: watermelon-- and I soon forgot about it.

Later as I was downloading the ride from the Power Tap, I looked at my power graph after the ride this is what I saw: 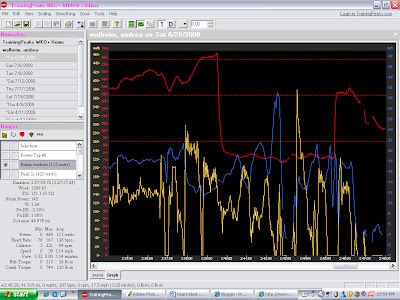 I did not think too much of it, but then a week later I was riding again on the bike path by myself and I passed a female recreational cyclist who was determined to keep up with me. I noticed she was on my wheel and crept up the pace a little, but suddenly I felt that flutter in my heart an I looked down and suddenly my heart rate had gone from 165 to 82. I felt like crap. It was everything I could do to keep going, but by this time I had already run her off my wheel anyway so it did not really matter if I slowed up a bit. I know, lame.
And so it started. I inquired around to a few coaches who told me perhaps there was something wrong with the Power Tap heart rate monitor, that sometime the power lines can make them act screwy. But I knew there was nothing wrong with my heart rate monitor, I had felt that flutter in my heart and had felt incredibly weak and had to curtail my effort. I had ridden next to Donald Yih, MD on many a cold long winter Pretzel ride, so I told him what was happening and I made an appointment to see him over at Lankenau. He said that he noticed that if your heart goes into any kind of arrhythmia the power taps do not record it properly. He said what was likely happening was that I was gong into tachycardia, or fast heart rate. He suggested that the next time it happened I got off the bike and took my pulse.
It happened once at the end of a group ride when everyone was pushing up the last hill into manayunk on Umbria. I was in a paceline and I felt really strong and I pushed hard up the hill in my big ring, trying to make everyone suffer a bit….and then it happened, I motioned that I was pulling off and I cruised onto the sidewalk and jumped off my bike and took my pulse. My heart rate monitor said was beating at 79 beats….and so was my pulse. WTF?
posted by Unknown