so today I was having procedure #5 (yes, that is 5 surgeries in 2 weeks) at the gynecologist's office. This was not exactly an elective procedure, but I did elect to have it when I was convalescing from my heart surgery as well as the incision on my saddle where, a pressure cyst that causes me pain at various times in a typical year where I ride 7000 miles directly on top of it, was removed.

So the progression of misery coalesced this way:

1. I decide to get the pacemaker, after having the EP study the week before


2. I was banned from bike/gym for a week so I decided to take care of that nagging little cyst mentioned above


3. once I am cleared to ride from #1 above I take a short ride and open up my stitches from step #2, ouch.


4. since I can't do anything anyway I decide to have pre-cancerous cells on my cervix lopped off with an electric wire loop, which they are doing today.

Basically since I am miserable from not exercising, trying to work, cook, clean, take care of dogs, etc in chronic pain, as well as having a deformed upper torso resulting from an elective procedure, I might as well check everything off my list that requires me to take it easy, and do it all in the same month. We will call that month April, 2009.

So I am in the waiting room and I hear my regular Gyno is late coming back from her C-section surgery. Great, now I have to sit in the waiting room, or Baby Central; aka today's Portrait of Hell. Crying babies, fat pregnant miserable-looking women, completely clueless fathers-to-be-looking like they would rather be ANYWHERE but here, a Stupid Box that spews out nothing except videos about what to do when your new baby cries at night blah blah blah. You get the picture. I have an ipod on and am glibly typing away. The nurse practically has to throw something at me to get my attention.

She calls me in and asks me if it is OK if another Dr. does the procedure. I say "no problem" since I was intending to drive to work after this. Which I did. They numbed me up nicely, even giving me a little shot of epi in the lydocaine, nice touch.

So I am there in the stirrups, propped up on two pillows so I can continue writing the poem I had been working on for the past week. Dr. B asks me who made the incision (still with little stitches sticking out) next to where she needs to "do her work". I tell her that my boyfriend did it; I asked him to slice me open since for the first time in 10 years I was off the bike, and he is a surgeon, after all. Might as well make himself useful! She asks me his name, and when I tell her, her eyes get wide and she starts laughing. "Wait--I know you....you sent that funny party invitation! My husband and I are old friends of Mark's....we were so sorry we missed your party!"

So the two of us yammered on, and the procedure was done, and I was told not to exercise for a month. You have to be kidding me. There is no way; I am testing out this pacer in the lab at Cadence this wednesday so this thing better heal right quick.

It is a small world...and it does seem that doctors all know each other. Anyway, it was fun getting the dirt on your new boyfriend at the gynocologist's office. Kind of makes the whole business of having the tip of your hoo-haa cut off a bit less draconian. 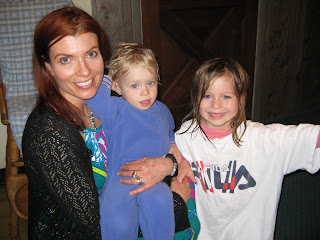 despite what you might think after having read this I do love kids, even if they lack fur