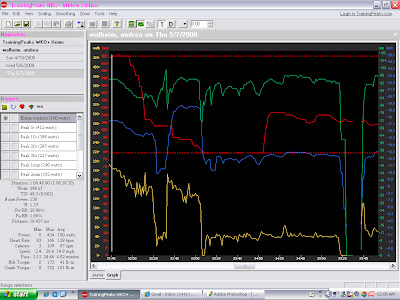 ...perhaps I spoke too soon, with my effusive thank you to all 7 of my cardiologists. The very next morning after I posted I got up at 5:30 and drove to Cadence (because it was still raining after something like 10 days) I decided to take class. I heard it was a tough one.
Got to Cadence a few minutes late so did not get a great warm-up, but did some overgear intervals. I was giddy in class; there had not been a class in the last year 8 months that I did not leave at best, incredibly frustrated and at worst, demoralized and in tears. Then we started doing LT and superLT intervals, the kind I have not been able to do in ages, because it is the extended ones at high power/HR that make my heart block.
The first interval took place and it was about 4 minutes at my new LT of 180 (LT now stands for low-T) A long drop from 208 in October but like I said before; who cares I'll get it back. Then there was a break, and we moved into the second interval, which was superLT.
I felt my heart rate rising as usual, then gradually I felt I was being paced atrially, and suddenly....I felt that telltale flutter and I thought; OK, I am being paced...or am I? .... because I felt weak and then my heart and the pacer seemed to be having a power struggle.
Then my heart rate dropped to 132....for about 40 seconds while I backed off the interval (because I was too weak to continue) and then it came back up to 144. Great. I thought I went through all this hell and twenty thousand dollars to prevent this shit from happening....
The second block happened from 165 down to 97, then it dropped further. At this point I wanted to make sure I got a good reading to show the doctors; so I kept pushing as hard as I could for as long as I could, so that the graph would show that at the same power output my heart rate plumetted on its own. This is exhausting.
I sent an email to my Mark, as well as my friend and cardiologist Ben Zola, who had first diagnosed me. He told me not to freak; they just had the settings wrong. I got home and emailed Dave Callans and literally 10 seconds later my cell phone rang. It was a phone number from HUP.
Whoa, I had not expected a response that fast.
It's easy to lament the physical limitations you have when some organ in your body is not performing properly; or when you succumb to some illness. But the emotional strain can be even more painful, if not more debilitating.
In those moments after I had hit "send" and I skipped down the stairs to feed the dogs--it hit me that the journey was not in fact over. After spending the frenzied hour after class sending urgent though somewhat comical text messages to Kuhn and Mark and others about how my pacer was not actually working, (ha ha how ironic!) I had just, for a second, allowed myself to burst into tears.
And as I mentioned above, at that second the phone rang. It was Dr. Callans. Probably not such a bad thing for a doctor to become face to face with the raw emotion of his patient. I am lucky enough to be in the care of a doctor who is not only very skilled but is compassionate and a good listener. But then he is extraordinary.
He told me that he would be in surgery all day but I could come in and see his associate, Dr. Riley. Mike Riley is a cyclist, and a friend of Alaina Gurski's who I had met on a ride earlier this year. I was delighted to be able to finally meet him. So I packed up my laptop and headed back to HUP, quite hopeful.
Mark had called it a week ago. He told me there was a 50% chance that the pacer would need to be adjusted for it to work properly for me. They are just not used to pacing someone with my weird heart block.
So it iis just a matter of trail and error I guess. Stay tuned.