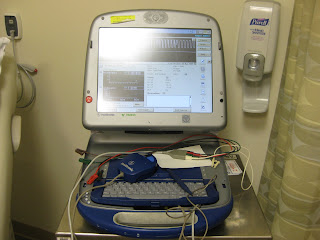 Got to HUP on Thursday the 7th with my laptop in tow to show Dr. Riley what had happened in class that morning. I knew he was a cyclist, so I figured he would have a very good understanding of the demands of my heart.

I got into the office and the Tracey Munson the nurse-practioner greeted me.
I showed her my power files and explained the difference between what happened today and what happened before the surgery. I explained that today it was like there was a little battle going on between my heart and the pacer. But there was no doubt in my mind that I had blocked, and that at least one time I blocked 2:1, because I had felt it. Sometimes the Power Tap HR monitor does not catch my correct heart rate all the time, but there is no mistaking that feeling in your chest, and then in your whole body, when your heart rate drops from 164 to 82 in about a second. I also complained about the pulsing I was experiencing in my diaphragm, perhaps from a stimulation of the phrenic nerve, although Zola later told me this was bullshit, it was not the nerve. Anyway.

She listened intently, and had the Medronic "suitcase" next to me and placed the programmer transponder over my incision. First she paced my heart with each lead independently to see which one was causing the pulsing, despite the fact that it is usually the Atrial lead, on me is was RV (right ventricle). Hmmm, I do not fit into the normal pacemaker recipient profile. Go figure. The RV lead created the pulsing which I had her feel just by putting her hand on my ribs. It was pretty severe, like having a case of the hiccups. She then adusted the voltage down from 4.0 volts to 1.25 until the pulsing stopped. One obstacle cleared.


She checked frequency and impedance and it did not appear that either lead had slipped. I was greatful for this, because my biggest fear was having to go through that surgery again. She was looking at the screen, then she stopped, looked up at me, and said, “wait! I think I know what is happening here.”

She explained that the Medtronic Adapta has a function called MVP mode to prevent the ventricle from being paced all the time. This mode prevents this RV pacing unless you really need it. (see below)

Dr. Riley came and was very grateful for the Power Tap graph because he was able to compare pre and post op graphs. It seemed as if (from the graph) that what happened today this morning in class was not 2:1 but 4:3, then 3:2, so there was some discussion about what mode they needed pacer to be in to keep me from dropping like that. He put a call into Dave Callans who is in surgery all day and they left the room. 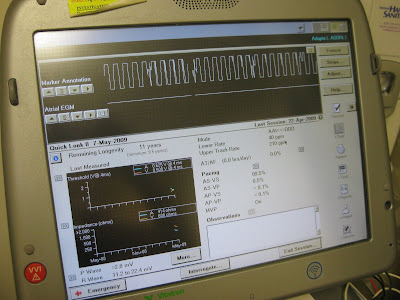 Then Dr. Riley came back and sat down with me and explained to me that the pacer was defaulting to MVP mode because they normally do not pace both chambers of the heart at once. The reason they do not pace both chambers at once is twofold. First off, since any pacing of the heart is not the organized cascade of impulses that occurs with your intrinsic impulses from the SA node, when you are paced it can feel as if your heart is a little out of sync, and this is even more of an issue when the heart is paced from the atrium and the ventricle. Bascially, the heart is being paced from the muscle, not from the natural nerve conduction system. The second issue is that there is a slight risk of the heart actually weakening if the heart is dually paced. They are not sure why it happends in some patients. Later I spoke to Zola about this and he said it is a non-issue in an athlete.
So he turned off the MVP mode, and I was now in DDD mode. I was hopeful. More to come.
posted by Unknown