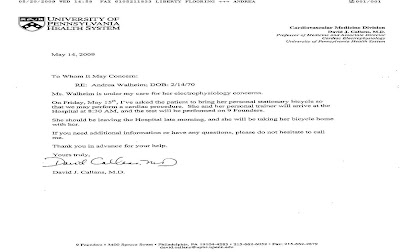 ha ha Dr. Mark Mantell, MD, FACS Clinical Associate Professor of Surgery and Director of Vascular Access relegated to "my personal trainer"
....so after this latest dissapointment I emailed Callans and offered to bring my bike into the lab so they could see what was really going on with my heart; the PowerTap HR monitor was just not cutting it. I thought of this while on the phone with Zola (that night at Tangerine) and he said that they probably would not let me do it because it would take up too much time. To my great delight Callans thought it was a capital idea and he arranged for me to come into the lab with Mel (Melissa Cliver, CRNP Nurse Practitioner Cardiac Electrophysiology) and Dr. Riley as Callans was going to be out of town at a medical conference. So Mark helped me carry my bike and trainer into 9 Founders and they hooked me up to a monitor and the Medronic machine and I started pedaling. It was really hot in the room, so my HR rose very quickly. 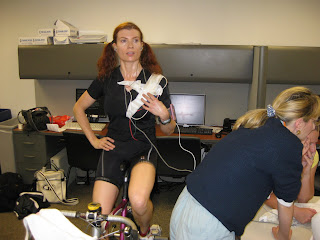 Within 3 minutes I was able to block at a heart rate of 174. No shit! It was hot in that room. And so it went, for an hour, with me blocking three times and Valerie, Mike Riley and Mel Cliver gathered around the monitor. It was pretty cool being in there and finally being able to show them what was going on out on the road in an attempt to get the device dialed in. Also it allowed me to compare what the PT monitor was showing as opposed to the Medtronic monitor, which is more accurate. I could glance over when I was riding and see exactly when the pacemaker kicked in. After an hour I got off the bike while they conferred, called Medtronic, and moved through the various screens of the software over and over as they intently studied the printout generated from the machine. They asked for a higher level of support at Medtronic, and Valerie seemed a bit irritated when she did not get that immediately. I was just taking it all in, wondering if they would ever really be able to dial this thing in for me or not. And if they could not; I wished they would have told me that so I could have made a more educated decision. I was told that the pacemaker was going to cure this disease of my conduction system and I would be 99% as good as before. But Dr. Callans, who is, after all, Director of the Department of Electrophysiology at HUP, was very encouraging, so I put myself in his hands. No negative thinking at this stage. 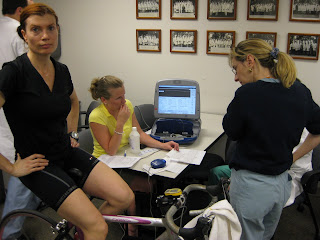 hopeful and fearful at the same time...and a little tired. 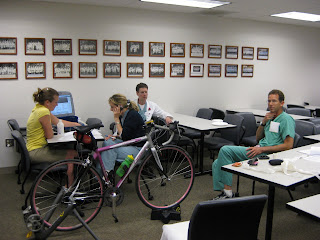 the crew at an impasse, asking to speak to bypass the plebians and jump to top level support; I feel like I have been there a thousand times when calling verizon dsl. Anyway...

So after about a half hour I got back on the bike and started pedaling again. This was, after all, today's workout. I blocked at 172, and then they made another adjustment. They asked me to try one more time. At this point, my legs were tired. My heart was tired from blocking. And I was a little depressed. I cranked it up more gradually this time, instead of spiking up to 440 watts, I just brought it up gradually over 200, then up by 20 watt increments...on up to 260...I felt the flutter which they later told me were PVCs, and my PT showed a block (HR stepped down to 82) but all of them were standing around saying "that's all you! you are not blocking..." It seems one thing I learned from this test is that the PT HR monitor was reading my instrinsic ventricular beat and not picking up the paced beat. I needed to be aware of that and go by feel, or else I could be losing power not from a physiological phenomenon but because of a psychological one. In other words, I am psyching myself out in anticipating of the block.

So the good news is that they made another change, still left me in DDD mode, and were waiting on a couple of questions from the techs at Medronic. They told me there was still tweaking to do but to go out and ride and report my findings; the change they made today should make it much better.

Go forth and ride. I can handle that. It's just a process; that's all. I just have to be a patient patient. Not so easy for me.
posted by Unknown