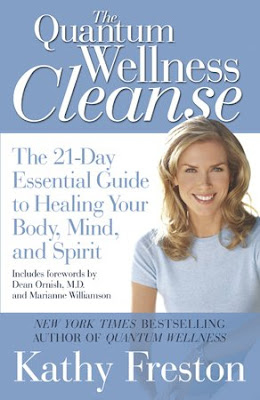 Several weeks ago the X and I were talking and he told me about this new book from Kathy Freston which apparently is all the rage on the talk show circuit. Everyone knows by now I watch no TV, and that means none, I only have a TV in my house for boyfriends and petsitters; furthermore, it pisses me off to pay the cable bill each month just for the aforementioned two reasons. And really, when SOs have been over the house now and in past lives, they are/were not sitting around watching TV. But anyway, I have basic f'ing cable, and I had no idea who Kathy Freston was. You can check out her website here, where it discusses the book in more detail.

Essentially Kathy has figured out a way to package the advice of many health gurus, practioners, and authors who have come before her (she quotes many of them) and she recommends doing a 3-week cleanse at least once a year. During this cleanse, you banish the Big 5 from your diet for 3 weeks. These are:

Anyway, Max said that he and two of his clients were going to take the challenge of the Quantum Wellness Cleanse. Now I had not been feeling right since the surgeries. Perhaps it was being on Darvocet for a week, or not exercising much for 2, or a result of my hormones being all wacky lately...whatever, I have gained 3-4 lbs since the surgery and I am just not feeling right.

So I surmised that for me, the cleanse would not be a huge undertaking. Really, a plant-based diet of no sugar, gluten, animal products, caffeince or alcohol was not such a huge change from my normal diet....with a few exceptions. Yes I do probably eat as many or more vegetables than your average vegan, whose diet might tend to be heavier on the grains than on the green leafies. I love to eat all vegetables, especially non-starchy ones, so much that when I have dinner guests they often tell me how, um, regular they are for several days following the repast. Alcohol I basically stopped drinking because it made my heart block more often. It's a habit I have not gotten back into since I got my pacer. I eat much less meat than I used to, and enjoy cooking meals using tofu, tempeh, or beans instead. Refined sugar is practically banned from my regular diet....although...I do like to have a big mug of coffee in the morning doused with 3 heaping spoonfuls of, you guessed it, raw sugar. When I go out to breakfast on a weekend, as soon as I walk into the establishment I scan those little ceramic sugar holders on all the tables to make sure they are bursting with little brown packets. If not I ask the waitperson to bring me some; and if they return with 2 or 3 packets I sheepishly apologize for being a "sugar whore" and I tell them I need 5 more packets. Really.

Caffeine is going to be the hardest sacrifice for me, mainly because it is my only addiction, and it is a strong one. Even though I only have one mug of coffee in the morning, or in the afternoon on the weekends following a 5-hour ride, I shamelessly use it to regulate my moods. I had started taking Wellbutrin to help with life's stresses lately, but the combo of wellbutrin and caffeine is too much for my dopamine and norepinephrine receptors to handle. If I have too much coffee I have a very hard time concentrating on anything; I am so revved. Anxiety then sets in for a person who often defines her self-worth based on how many items she can cross of her to-do list. I need to work on that.

So I was looking for some excuse to experiment by cutting it out....and here was a good one. On Saturday I changed to tea before the ride, and then I went home without stopping at La Colombe for my usual double latte afterwards. I was gardening later and I felt like I had rubber for arms and legs, I mean I had NO ENERGY. Ugh, and I had had tea that morning. Sunday I did the same, a cup of tea, and yesterday, well yesterday I went cold turkey on Memorial Day. No coffee. And no barbecue for me. I am a bit irritable and have had headaches on and off...but I am pretty excited about the cleanse and all the new recipes I will be making in the next 3 weeks. The next few days are going to be tough without coffee....especially at work and before morning workouts, but I am really looking forward to being free of it. More on the Cleanse in coming days.