I got home from work Thursday, dog-tired. My body needs to rest, but work has been very demanding and I just can't take a few days off. So I walked in the front door to the usual cacaphony of dogs barking with delight at my arrival. I had noticed that the hole in my porch roof that had hosted a starling nest for the past 3 years had now become a squirrel nest. The other day I saw a mama squirel clabbering down the old drainspout on a quest for food. I am not very fond of squirrels. They are the bane of gardeners everywhere, myself included.

I walked back out on the porch to grab the mail, and suddenly there was the scurry of little feet. I glanced over to see a tiny baby squirrel diving off the side of my porch. Wow, they were cute. A closer glance and I saw what looked like a dead baby squirrel dangling from one arm from beneath my plantstand. I walked over to get a closer look. The poor little thing must have fallen off and it's claw got caught in the joint of where the two metal pieces fused together. I cradled the little guy in my hand. He was breathing. I wondered how long he has been hanging there. Probably only seconds... he would not last long this way.

I reached my other hand over and tried to gently pry his little hand loose. It was really wedged in there. I tried to use my right hand to see if I could pry the metal apart. It was not budging. I knew Mark was on his way over, so I waited. And waited. I talked to the little guy and got him to calm down. Ten minutes went by. He looked like he was sleeping. Although he did not weigh much, I was supporting him with the arm that had just been involved in my pacer surgery, so I knew I could not stay there indefinitely. After another ten minutes with no help in sight, I gently coaxed his little claw open as it had finally relxed enough, and suddenly he was free, with only a tiny nick that was barely bleeding.
Boy was he tiny. And tired from his ordeal. I put him down on my planter beneath the nest, but I was afraid the cats would get him. He was not moving. So it was getting late, so he spent his first night in captivity because I could not bear to have my neighbor's cats eat him. Then again Madison would love to eat him I am sure, so he spent the night in the vestibule with the dogs ocassionally sniffing underneath the door to let me know that they were aware that something TASTY was right behind the door. He seemed pretty happy to curl up and go to sleep: 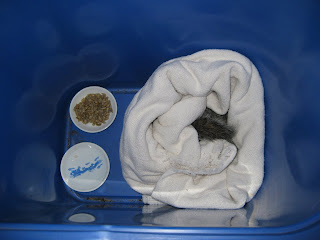 The next morning I refilled his food and put him out on the porch. I thought I should let him go, so I lifted him up and put him on a planter. He ate some food, then fell asleep, right in an area frequented my cats! He was exhausted, so I picked him up and he decided to crawl inside the sleeve of my sweater: 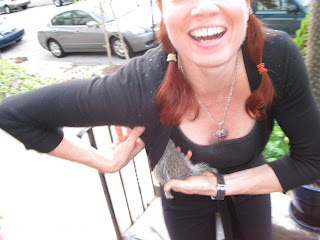 Finally I pulled him out and decided it was not safe to leave him exposed like that. 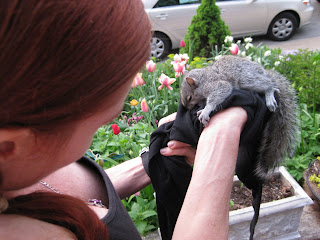 I made a little cardboard house for him with a very soft blanket inside and a little baby-squirrel-sized door and I kept some water and peanuts next to it. Soon we discovered that Bullwinkle liked the nesting idea too: 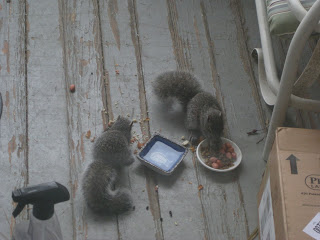 The next thing I knew we had 4-5 tiny squirrels nesting in the box. I fed them for several days until they were strong enough to go out on their own, which they did. I still see them around sometimes, getting fatter by the week. Anyway, it was a fun distraction from other matters.