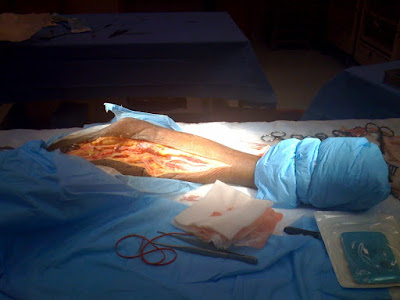 I have been really tired and grumpy lately. After I got back from the Cadence Camp, which I have been meaning to write about but have added it to my quasi-trash heap of posts I have started but have not had time to finish, I was tired, which is expected. I took the next day off, stuck at work catching up. The weekend afterwards it rained and rained, and after doing a couple of 10-minute LT intervals on Friday I took another day off, and the next day I went to the gym, because as I said, most of us cyclists were comtemplating building an Ark at this point it was just so disgusting out.


So in an attempt to make up for my lazy weekend, on Monday I went to the gym and worked out like an animal for 2 hours, moving quickly and pushing heavy weights to the point that the pacer kicked in several times. I worked legs, chest, biceps and core, then went home and rode my bike to work. It took me about an hour; I felt good. On the ride home I was feeling drained and in retrospect, most likely what happened next was a result of it being my 4th hour of training legs.

When I passed in front of the old trolley depot on Island Avenue, where about 15 sets of tracks converge and the edges are imbedded in cracked and deeply rutted cement, I jumped the light to get ahead of the cars. My wheek got caught in one of the tracks which normally I would have hopped over, and to my horror me and my commuter bike were flung sprawling across the road. I jumped up to avoid getting run over, grabbed the bike and found myself in the bizarre scenario of directing the hesitant traffic that was stalled behind me with my one free arm. Not one person stopped to see if I was OK, I might add, but then I jumped up so fast most of them probably had not seen the accident. I had to carry my bike onto the sidewalk because the brakes were knocked out of whack and neither wheel was turning. After a minute of minor adjustments I was back on the bike and heading home with some bleeding road rash and my first pair of torn-up shorts.


Anyway, I rode into work 2 more days last week, and each time it took me longer and longer to get there. By Friday, after taking a detour around the site of Monday's debacle and missing a turn which brought me into the deep 'hood with the wind whipping up from a storm brewing into quickly fading daylight, it took me 1:30 to get home. I only rode 2.5 hours this weekend in an attempt to get my legs back. Today I opted not to ride in after the gym.


I have also been a bit irritable and depressed. I am not sure if it is hormones, or the fact that I have been exhausted, or the fact that my mountain bike is again in the shop, or perhaps something more anbiguous. This past year with a broken collarbone and a bum heart I was unable to race or ride hard, and I took it in stride. I even had a pacemaker put in so I could continue to train hard and maybe even race again. I think now that I am 2 months post-op and the opportunity has presented itself to ramp up the intensity and get myself into racing shape, my body and mind are telling me...

I have a good aerobic base but no high-intensity in me right now, but that could quickly come in a matter of a few months. But my body seems to be resisting my increased training load, and to be honest I have no desire to race at this point. I am feeling a bit lost this summer, as it seems like there are so many things up in the air and I don't do well without a plan. I do know that it is counter-productive to heap guilt on myself because I am not getting pcyched to schlep back out to central PA to do the Wilderness 101.


So because I have been feeling a bit low, I have decided to spread my misery a little by sharing with you a few photos from Mark's recent surgical adventure. He was asked to test out a new medical device on a cadaver. Yes, that's right, actually the arm of a cadaver. Mark agreed, after all, this was in the interest of the advancement of medical science. He did manage to get a few photos from his iphone and today I share them with you. 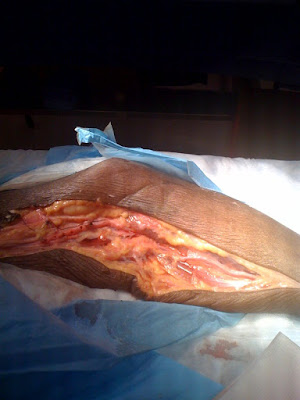 someone's sawed off arm sliced open like the mango I had for dessert today, yum

Afterwards I asked Dr. Mantell what it was like. He said it was totally weird, because instead of blood there was formaldehyde in the veins, the arm was cold, (not warm as he was used to), and the tissue was not in an orderly fashion as it would be in a live arm, it was all jumbled up and this made it harder to do the surgery. He said he was thankful that he did not have a burger for lunch or he might have been queasy.

"Really?" I asked, quite surprised. I mean I could not even look closely at the second photo without some discomfort, but here was the Clinical Associate Professior of Surgery and Best of Philly surgeon Mark Mantell MD saying it grossed him out.
I will spare you the litany of arm jokes that ensued. You know.... armageddon, the surgery cost and arm and a leg, and on and on.

I am still tired, but my depression has lifted after yesterday's gardening. I am not dwelling on too much today, just looking forward to a nice dinner for our anniversary and even some sort of well-earned chocolate dessert.
posted by Unknown