7.10.08
X stapped my electrodes on tightly with adhesive tape and we set up to replicate an episode. I hit the hill at Bryn Mawr avenue like I was possessed. We flew past these other riders like they were standing still. X hung in there with me almost to the top. My heart rate went to 165, then 168, and I was sure I would have an episode. It went to 177. Still no episode. 177, damn I sprinted up that hill. We discussed the next hill I would try. That was a longer, steeper climb in Gladwyne. My heart rate went to 174. No dice. I could not believe it. Maybe it would not happen anymore! So I did not kill it on anymore climbs until we got to the one by Radnor High, my alma mater no less. I ran out of road before I could keep my heart rate up long enough. And X was being a dick so we yelled at each other as was we were descending Matson Ford at 35mph. Anyway, I decided to really push it up river road. I flew up and watched my heart rate climb into the 160s and then into the 170s, it did not happen, and then I was going downhill, so I sprinted as fast as I could--and boy it hurt because it was about 100 degrees out, and finally my heart rate dropped--from 172, to 83. X caught up to me in the parking lot and I told him my heart was at 83. "Its so weird, I just don't want to stop riding, but I don't want to push it either." But I was not satisfied with that, because it was not the classic episode. My heart rate took a full 2 seconds to drop, and it only stayed down for 1 minute before it shot back up to 132. So I started hitting the gas where Shamont hits Umbria, and I kept turning it on until my heart rate, with X trying to stay on, until my heart rate was between 160 and 170 for 2 minutes, I mean I was giving it everything I had and it hurt. Finally--boom--I felt that telltale rush, like an adrenalin rush, and my heart palpitated, and then I looked down and my heart rate was 81. X came up and I coasted, and I told him what was going on. I told him when I turned the corner at the bottom of Main Street was where it usually popped back up again. Sure enough, it stayed around 80 until I turned that corner, 3:20 later, and then it shot up to 127. So we stopped in Manayunk, and got a water ice, and I had to hear that the water ice that I had been so excited to introduce him to (and I bought) was not as good as Ritas. He did apologize for his behavior in Radnor though, guess that's something. We rode back slowly, stretched, and a few hours later I was able to take the Holter off and shower, yay.
[Uploaded 7/20/2008 8:23:36 PM] 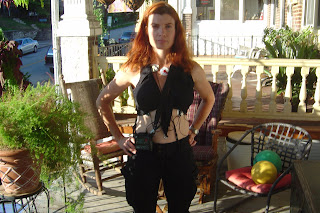