another fine day at the office 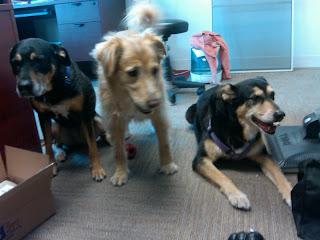 the crew looking particularly guilty
... so I was pretty pissed tuesday morning because late monday night boss #2 sent me a snitty email:

I just wanted to let you know that you were in the office for 5 1/2 hours today. You could be doing way more to help chris & I out.
Sent from my Verizon Wireless BlackBerry

Now keep in mind the reply I wanted to write was something along the lines of:

Dear Boss #2
Thank you for letting me know what my hours were
yesterday. It is uncanny how you knew that my watch was broken. I was going to work late tonight to finish some projects that got neglected on monday but I am concerned that you won't be around to log me out and therefore I may indeed get stuck at work all night. So I opted not to show up at all.

stick it up your butt.
sincerely, andrea

But alas, for the time being I have to work here until Boss #2 pisses me off to the point where I get off my ass and look for a job that offers a 401K, a modicum of flex time (albeit less than here) and some co-workers that graduated from high school. Throw in a raise every 2 years and I'm so outta here!

anyway.....I did the next best thing, unwittingly.

Tuesday I came in and worked my butt off for 9 hours, which of course I would have done anyway but only one of us is actually counting. Today I brought the dogs into work because I knew it would be a late night and it was supposed to deluge by now, and the dogs would not get a walk later. They love running around the warehouse anyway. Well not five minutes after I let the dogs in, I hear a voice bellowing, "Andrea! your dog just took a shit all over the upstairs!" this from, you guessed it, Boss #2, who sounded extra-specially annoyed now.

WTF? He did??? I walked upstairs and sure enough, Gryphon had taken a super-large doggy dump right outside #2's office. Not in a nice neat steaming pile mind you, but actually in that punctuated pattern that can only come from an animal who has perfected the "walking while defecating" technique. After exclaiming that it would not have happened if my dogs were not here (no way!) #2 sat back down at his desk and commenced his phone conversation and I cleaned up the crap. They were actually nice fluffy healthy poos, nothing too gross. Madison and Chloe were already hiding under my desk in fear, however, they knew this was bad, very bad, humans were yelling over it.

So anyway, not that I planned any of that, and sure enough it probably is not going to help my prospects here much, but, as Colin stated, I literally gave #2 some shit, without having to say (or write) a word. Thanks Gryph you old boy!!

When I sent Boss #1 an email letting him know what had happened while he spent all day in a deposition downtown, I got this response:

Nice - I knew I always liked Gryph the best.

I know you are bored and miserable and stressed right now; so I thought I would tell you that 5 minutes after getting inside the building, Gryphon took a shit on the floor outside #2's office. I swear I did not put him up to it. #2 was NOT very happy about it to say the least. Not that I find it
funny, but you know the timing could NOT have been worse.

Yes I cleaned it up, I didn’t think it would be good to leave it until you got back. : )