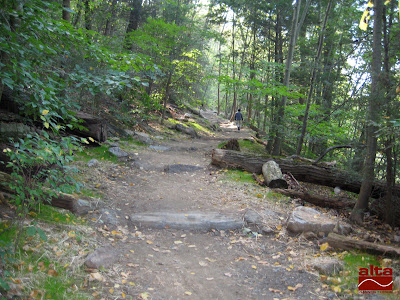 Today was a beautiful spring day, and I made the most of it, mostly because I took the day off from work. Got up and did my normal morning chores and then some more, went to the chiropractor, and then to the gym for a quick upper body and core workout. The sun was out and it was getting warmer and warmer; I was gleefully running around in yoga pants and a tank top. Got gas, got cash, and then met the "dog meat truck" in the parking lot of Michael's Arts & Crafts in Conshohocken.
Since I feed my dogs a "biologically appropriate" homemade diet consisting of raw meat, some grains & supplements, I needed a cheap source of beef as I have three 60-lb dogs that eat 12 pounds a week. The Volhard list-serve recommended a supplier in New York, and myself and about 20 other Philadelphia-area raw feeders meet the truck in said parking lot every eight weeks to get our two-month supply of frozen meat and liver tubes. Anyway, I have to be there at 12:30, and then lug the meat back to my house, up the front stairs and then down the basement stairs to the extra freezer in the basement I bought years ago for this purpose. It is ok in the winter, but in the summer the outermost layer of meat starts to defrost and the blood attracts flies and can stain your clothes and attract the dogs who are perpetually in the way as you drag this stuff though the house.
At any rate, I think I've spend enough time on this blog post justifying why I take the first Thursday of every other month off for "dog meat day." At work that is how it is known. Since I ride my bike to work, race mountain bikes, am a vegetarian, a raw feeder, and have a fully functioning brain, (not to mention that I am female), I stick out anyway working in a construction company, so no one bothers to tease me anymore. Except for last Monday when I showed up at 9 am, well, that was just too much for them to pass up.
I stopped at Holod's and bought some pansies, drove home, ate a plate full of vegetables, did some sweeping out front with the meat tubes glistening on my porch floor and the dogs looking longingly at them through the glass door. I finally unloaded the meat and got my kit on. It just so happened that dog meat day this month fell on April 1st, which was the day that Dr. Glaser said I could get back on my mountain bike after being off since December 13th. Perfect.
So I checked the shock, the brakes, the tires and headed off. It was quiet in the park; I mostly passed a few hikers with their dogs. There was special significance to the place today, partially because I had not been there in so long, but mainly because it was spring and the brown decay of winter was being gradually supplanted by new growth. The harbingers of summer were appearing everywhere: a few intrepid insects showed themselves, the ferns were still just tiny unfurling fiddleheads, the spent leaves were melting into the landscape and fertilizing the new shoots and leaves. I heard only the insistent tapping of woodpeckers, the chattering of songbirds, the sound of water splashing over rocks in the creek, the whooshing of my tires through the packed leaves and dirt; and, if you listened closely, some muted sonic reminders that "we"--birds, insects, fish, and myself--were actually in an urban park. Beyond this bucolic oasis there were cars, trains, buses, and the anxiety and hardship of a large city in a country struggling to finds its way out of a nasty recession.

I was riding steady, just taking it all in. I had to get used to riding off-road again, handling the bike, shifting with the 2 x 10 gearing, climbing on gravel, jumping over logs, descending without braking on rocks, the whole bit. It felt great, I had only one water bottle and a small pack and I felt pretty light on the hills. I was shifting my weight not-quite-expertly, my timing was a little off, my technical skills a little weak, but for the first ride back it was just fine. Most importantly I really enjoyed it as I was not analyzing and criticizing, just having fun. The way riding used to be.
The funniest part was that I fell, three times, but never while I was actually riding the bike. 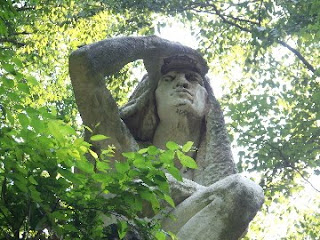 For instance, I was standing in the middle of a rocky steep uphill on the Indian Trail and I turned to survey the view, smiling because I had ascended the difficult part well, when I lost my footing with one leg in my pedal and the bike and I keeled over. I face-planted into a six-inch deep mudpuddle. No joke, but I came up laughing with grit in my teeth.

I suppose that's the take-home message here, if you come up laughing with grit in your teeth after a face-plant into a puddle, you are either:

a. a naive dim-witted glutton for punishment, a la Candide OR
b. a cynical, critical, been-there-done-that type-A ex-bike racer who has just undergone an extended period of bad luck, and refuses to sweat the small stuff anymore.
I will go with option b. (I reserve the right to sweat the big stuff sometimes though)
posted by Unknown