an auspicious start for a bionic heart 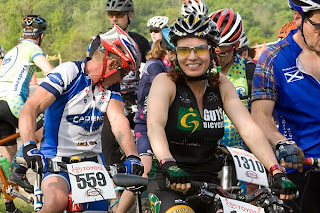 at the start with Eddie behind me 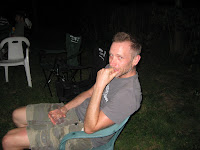 I got up early Sunday but not early enough, thanks to listening to Joe Reynolds tell me it was only going to take 45 minutes to get there (he would have been right if I had not gotten lost). I had stayed out at Meisha's a bit too late, and it took me too long to get my shit together since I have not done this drill since April of 2008.

Anyway, when I finally got myself out of bed it was raining.  It had not rained for several days and I guess the prospect of the trails actually being DRY at Granogue was too much for the Gods to bear so they provided just enough rain to make the off-camber roots and mud extra slippery.  The rain stopped, and I loaded up the car, fed the dogs and was off.  I was cutting it kind of close but since I was doing the endurance race (never done it before) and would be riding for 4+ hours I really did not need to do much of a warmup, and besides I was not taking this too seriously.  For XC races I used to lug my road bike w/powertap, trainer, a clipboard with my warmup zones printed out, ipod, etc etc.  It sucked, I had to get there 1.5 hours early everytime and if I did not hit my zones in the warmup I would freak out.  I am done with all that.  Christ, I have a pacemaker now, how can I take any of this too seriously?

I used google maps and of course got lost.  It clearly says on my checklist from 2008 to always "check 2 sources for directions" (what did I say about OCD?) but I used the GPS on my phone to get me there 25 minutes before staging.   I checked in, slapped my race number on my bike (with an imbedded timing chip thanks to John Miller) and rode back to the car to change and load up my bag for my "pit", which was next to Ed Moran's cooler at the base of the tower.  So anyway, zero warmup, my Garmin actually read "0.00 miles" when Fat Marc told us to "go."  Another first.

The thing about this race, and I guess other endurance races, is it is a mass start.  There were about 75 of us starting at once, men and women, so it made it really tough to discern what ladies were in front of me.  This ended up being an important point. I started out at almost XC pace, and then beat myself up a little later when I got caught behind some sport-level enduro riders who could not navigate the slimy roots and rocks in the first wooded part of the course.  I passed as many as I could.  But I was thinking I needed to settle into a pace I could maintain for 4 hours in 90+ degree heat and humidity. So I backed off a bit and just started enjoying the course.  My XX components were performing flawlessly, I was riding better over the technical stuff as the day wore on, and I decided that I had found my calling was far as racing was concerned.  I felt like it would be no problem to do 4 laps, and it was clear time-wise I would be able to do 5.  I also assumed that most of the women were ahead of me. I passed Wendy Bulotta on the middle of the first lap, and  young Cynthia Seaman and I traded places a few times before I put some time in on her later in the race.  Not that the course was not grueling, because it was.  It was incredibly hot and I made a mistake on my 2nd lap by not taking a fresh bottle. There was a lot of climbing and I was doing pretty well up most of them, until crossing the bridge before the tunnel for the third time a  2-inch diameter stick flew up from hell and got lodged in my drivetrain. I straddled the bridge and pulled it out but afterwards I could not get into my easiest 2 gears.  That proved to be tough as I needed those gears late in the race to get up those hills. I need to learn now to adjust my gears on the fly.

As it turned out, I was actually in second place, behind Selene Yeager who was riding an impossibly fast pace, she did 6 laps, no one was going to catch her, damn.  When I finished my 4th lap after walking every hill because of my ghost-shifting bike,  I had time to spare, which meant I could do another lap.  I decided not to. I was sick of dragging my bike up the hills and I had not eaten enough so my legs were pretty much toast. That was the longest mountain bike ride I had done in a year.

I managed to drag myself up another hill (sans bike) to retrieve my bag and talk to Eddie for a bit.  Cynthia came up the hill for her 5th lap and looked very surprised to see that I had finished with 4 laps.  She gave me a "WTF?" look and I told her my bike was messed up and then offered her a gel.  She said she was OK but was going to take the last lap easy. She looked like she needed a pb and j.

So Cynthia beat me by completing 5 laps, Selene in first place with 6, and everyone else with 4 or 3.  I left before they passed out the awards because I had no idea I had finished 3rd, I thought I was in second to last place.  My teammates informed me that I had podiumed.  Holy shit.  My first race back I hit the podium.  That felt pretty good after my abysmal performance at Belmont last week.

Next up: a 6 hour endurance race at French Creek. I used to be really good at rock gardens but at Granogue, well, not so much.  I guess I will find out this saturday if I can re-learn that stuff in a 6 hour race.
posted by Unknown

"A stick flew up from hell...". That's funny stuff. Congradulations on a solid finish.

Damn! In that second picture, you look Jacked. I knew that mark had hooc=ked you up with human growth hormone.

That's not me in the second picture it's Selene Yeager, Bicycling Magazine's FitChick and the winner of the race. Notice she's a brunette? I thought you could spot a redhead from 2 states away??

Andrea,
This is Laura Gleason from the Trans-Sylvania camp with Mike Kuhn and other characters. I'd love a link to your pictures when you get them posted (no rush). My email address is: selvasol4@gmail.com

I'm glad I found your blog as we share some similar interests. I've convinced my family and some of my friends to watch Food Inc (as one of many 'sign posts' along of the way of living more lightly on this planet.

Good luck with your return to racing this summer. All the best,
Laura

Laura, great to hear from you. I should have them posted tonight and I will email you. maybe I will see you if I make it up to help with the race and if not lets keep in touch. Great riding with you this weekend. Remember if you are despairing on day 3 that you get stronger on day 4!! A

Funny but it turns out that Cynthia embarked on her 5th lap after the time cut (meaning she was far enough behind me that it was after 4 hours and she kept going) so I did end up in second place after all. It ended up being my best finish all season. And my last season of racing. Good one.