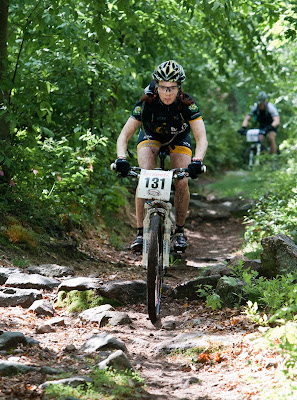 This was a 6-hour endurance race at French Creek State Park, my favorite local place to ride, and again, I had no idea how to pace myself, so I just started out easy and pretty much kept the pace steady for most of the day. Selene and another rider were ahead of me (this time I noticed) and as I was mounting the first gravel climb I heard a voice say, “Hello Andrea.” I was Andrea Slack, another woman in my class who I raced against in XC a few years back and who has done a bunch of these longer races. We chatted a bit and someone rode past us and told us were were obviously not going hard enough if we were talking but it was going to be a long day and I was not going to push too hard until I knew my legs were capable of sustaining a pace for over 6 hours.  He needed to mind his darn business anyway.

It was a tough course, lots of technical climbing and teeth chattering, tricep-wasting downhills that really required your concentration; you could not relax on them. The course was 95% singletrack, which I loved. Anyway to keep it short and sweet, I met my goal which was to complete five 10-mile laps which I did in 7:36. Selene did 5 in 6:19, Christina Buerkle from Speedgoat was second with 5 laps in 7:16, and Andrea came in 3rd with 5 laps in 7:21.  Which means if I had just pushed a bit harder I could have beaten all of them (except Selene of course), especially since on my last lap I was practically hanging out watching the elites rush by me.  As for Andrea,  I beat her in the first lap but she then passed me and finished ahead. The other two ladies did 4 laps and 3 laps respectively, there were only 6 crazy enough to do this. So I took home a 4th place finish, and I had fun. My triceps failed again, and I did take a few spills, but overall it was a good day. My drivetrain was having trouble at first but the as the day wore on the shifting got better, I think because we started the race in the pouring rain but by the second and third lap the winds kicked up and everything dried out. My bike got cleaner and the race wore on.

In 2007 when I was burnt out from a season of racing, I did a 50-miler at Michaux and decided not to race it, just to take it slow and enjoy the scenery. Michaux is rougher terrain than French creek, a bit more technical with several hike-a-bike sections. Even so I rode it in 7:20 ish which tells me I have some ways to go yet to get back some fitness. That’s OK, I’m having fun, and I’ve gotten much more patient with this sort of thing. After all, I do have a freakin pacemaker for God's sake.  Not that that is an excuse.  I think after completing the TSE camp I will be able to pick up the pace a bit and maybe become a bit more competitive.    I have a 8 hour solo endurance event coming up in late June at the MASS Festival Weekend in Marysville but after riding 7:36 at French Creek how hard will it be to do another 20 minutes?
posted by Unknown