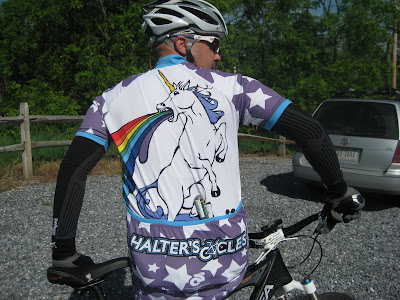 We had a bigger group this time  Chris Jones from Winchester, VA, Jorge Engroba, from Pocono Pines, PA, and Mike Festa, from Wayne, PA joined us, and they had fresh legs.  Here is Jorge showing off one of his jerseys, the "horse puking up a rainbow".  And the matching purple shorts with stars just completed the whole ensemble. 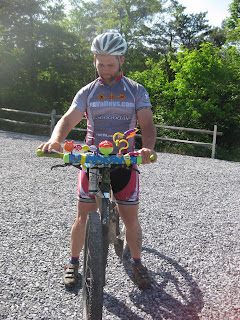 Several years ago, as Mike tells it,  the Corps contracted IMBA to create a trail network there.  They are the Allegrippis Trails:  rolling, machine-cut singletrack full of  banked turns, ups and downs and whoop-di-doos.  This XC was going to be Stage 4 of the  TSE. The terrain required a completely differnent type of riding than the first two days of the camp: as Mike described it, "this will be a day to work on high speed handling and short sharp efforts as the trails at Alegrippis encourage speed throughout." The singletrack was as well-groomed as White Clay, DE, barely a rock and nary a log or stick in sight, but the whoop-di-doos were higher than at White Clay and there would be several in succession which made it tough to keep your wheels on the ground.  They could LAUNCH you as I discovered later. 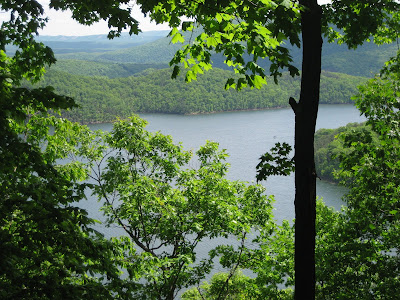 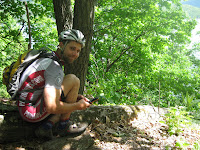 We hit the first trail and realized that we were going to to do 35 miles of this sweet machine-cut singletrack. If you could handle the bike through the turns, berms and whoop-di-doos you could conserve a lot of energy,  but it was hard not to hit the brakes sometimes. Anyway, I felt fearless and although my legs were a little stiff at first I jumped into the woods right behind Kuhn, Chris Jones, and Mike Festa.  We were all a bit exuberant at first. At the next break I was out front and I just took off so I could see how my high speed handling was stacking up.  I tried to use my momentum and stay off the brakes as much as possible.  I was also trying to lose Festa, who was right behind me.  I managed to drop him a few times.  Of course when we stopped to wait for the others at the end of the trail (Kuhn and Rob L were in coaching mode) I was totally sucking wind and Festa did not look like he had broken a sweat, the bastard.   After the first run, after Kuhn talked about where this stage fell in the race and some tactics for handling the terrain, Rob Lichtenwalner, who started as a downhiller and has a couple of national 24-hour championships under his belt, spent some time talking to us about tips for keeping your wheels on the ground, managing turns, etc. 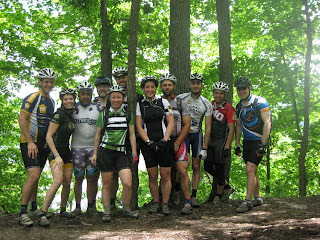 There was one trail called "Ray's Revenge" which had whoop-di-doo after whoop-di-doo.  Most had a rounded backside, but there was one that fell in the middle series of them on a downhill, when you were already going fast, especially if you were trying to keep off the brakes because your legs were as tired as mine were. Anyway I was coming down the trail fast and hit it, and my bike launched me into the air.  Sarah Lichtenwalner and Laura were behind me and later they said I was "way up there". It must have been over 5 feet.  As I flew above the trail I looked down and thought to myself, ok, I can do this, keep the handlebars straight, shit--my turned wheel caught the side of the sandy trail and wham! I went down hard on my ride side, slamming my head and sliding a few feet before my body came to a stop in the leaves.  I lay there with my eyes closed as Laura yelled for the boys to hold up.  After a couple of seconds I got up, dusted myself off, and said, "I'm Ok, but damn that hurt." It turns out that Rob looked at the settings on my rear shock and the rebound was set way too high. He did a quick fix on the trail and it was much easier to keep the bike on the ground after that.  However, we did do that trail over again later and I almost bit it again in the same spot.  We decided that someone  needed to mark that spot for the TSE or there would be more than a few accidents; you just don't see that it's different than the other ones until it's too late.
By that time my legs were bitching at me, and I was having trouble keeping up with the boys.  Actually I was having trouble keeping up with the girls too.  But I noticed one by one several of us were hurting too.  There was something about this  place really sucked the energy out of you. I felt as if I was cramping a bit and the fact that I had only water in my hydropack, and I had not consumed most of it, was wearing on me.  I carried a bottle of sports drink but that was long gone.  Chris, who is the Hammer Nutrition rep, gave me some electrolyte pills and I took 6 of them.  I felt a little better, but it was probably too late.  The rest of the ride was pretty much miserable for me, despite the great trails and the beautiful day.  That sucked, I really paid for my early exuberance.  This is what happens when you don't have any high end, I had been only doing endurance rides for 2 years. It felt so damn good to go fast though.
We were planning on doing the whole 35 miles, but it seemed as if everyone wanted to bail at 25, so that's what we did.  We changed, drove back to camp and showered.  I had my recovery drink and realized that I had only drank 40 ounces of the 72 I brought in my pack. Tomorrow I would fill it with sports drink and carry a bottle of Sustained Energy. 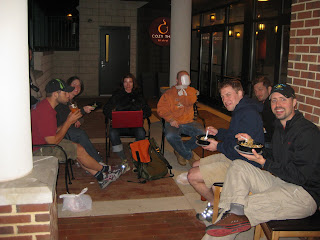 Later we went into SC to Cosy Thai and ate our take-out outside in the courtyard since they could not seat our 8-person party, this being graduation weekend. We went back to camp with full bellies to rest up for the 5 hour ride tomorrow, the entire final stage of the race.
3:25 saddle time/4:41 ride time/2588 feet of climbing/25 miles
posted by Unknown