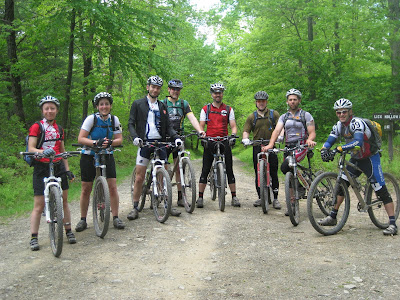 i was busy taking the picture
At this point I had done 8415 feet of climbing in 3 days, along with Laura, Joe, Brad and of course our fearless leader Mike K. I had been wearing my Zoot compression tights (left) every night in an attempt to avoid having a miserable ride on Sunday, and each night I ate a decent sized dinner. So on Day 4 we were riding the entire final state of the TSE, the longest day, 45 miles on the Bald Eagle State Forest/Coburn trails. 70% of the ride was on gravel or pavement, so it was not as bad as it sounds, but as soon as I got on the saddle I was in pain. We started on the first climb and although my legs were tight they were holding their own, but my saddle sores were intense. It was really tough to sit on the seat at all. I guess it was the 7:36 I spent in the saddle last Saturday at French Creek in combo with the last 3 days and 16 hours on the bike.

The problem then became nutrition for me. I had filled my hydropack with 72 ounces of Infinit sports drink, and a bottle of Sustained Energy, and of course a flask of hammer gel and multiple bars purchased at Whole Foods. Except by that time in our journey my body did not want any of it. I was having a really hard time chewing on the bars and drinking the water. Luckily I brought a pb&j and I shoved that down in small pieces but we were not stopping as much as on the first 2 days and since I was no longer in the lead group when I did catch up to them they took off again. I could not tolerate anything that I brought, and as a consequence my legs were getting more fatigued. Even when we were on the flats we were pacelining and I had trouble staying on that wheel. It sucked. 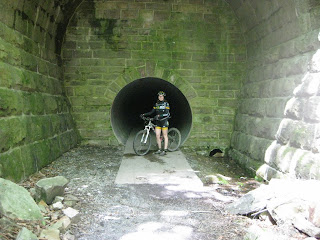 We hit a railroad bed and we came upon 4 families with about 12 children riding alongside of us, Mike took a picture; the little girls with their pink and purple bikes were motoring alongside us, it was great. Then we reached a really cool, completely dark tunnel.   Then this cool old bridge.  Overall the course had really good flow with the combination of gravel climbs and descents, railtrail, and features like the tunnel and bridge. This was going to be an awesome adventure for the racers; I was jealous.
Then we came upon a porcupine lumbering next to the road. I have never seen one of those things up close, they are very odd-looking. He did not seem to be phased much by us at all, almost as if to say, “go ahead, I dare you.” 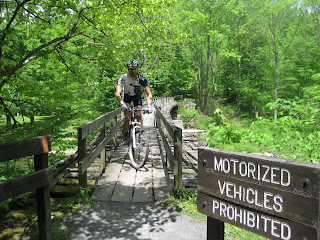 Thankfully, Robbie Lichtenwalner was giving Laura initially, and then both of us, pushes up the long mile-plus climbs. By the third hour I really needed it. Laura finished out the day riding stronger than she had on any of the three previous days. Sure she had a god bit of help at first, but even so, to get stronger after 3 and a half days of hard riding was pretty impressive. That never seems to happen with me.
I was pretty damn happy when we pulled up to the campsite with 45 miles on our Garmins. We rode for 4.5 hours and climbed 4615 feet today.

Back at camp everyone started packing up pretty quickly because Laura had a 9-hour drive back to North Carolina, Joe to Virginia, and Brad had to get back up to Boston. Laura and Joe were both racing the TSE, and with the training and pre-ride they got this weekend it will be interesting to see how they do. 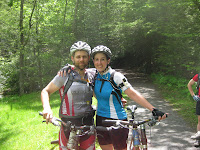 Ray Adams, the other promoter of the TSE showed up at camp after Mike and I were still cleaning up the cabin and loading my stuff in the car. We talked for a while but then I told Mike we needed to bolt because I had to get home and get my stuff together for "work" on Monday. 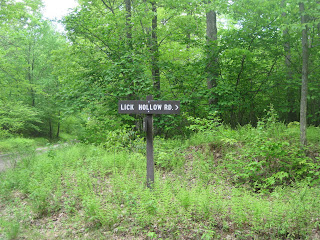 On the ride back to Bethlehem Mike and I talked about racing, training and nutrition. I expressed my frustration that on the third day of every camp I crash and burn, and I am starting to realize it is a nutrition issue. I eat a vegetarian, plant-based diet with very little sugar and zero junk food. Constantly eating gels, bars, shot blocks, and sugary sports drinks makes me sick, literally. I start to have GI symptoms, and it is hard to even get the stuff down. Rob told me that maybe I should not eat food at all. He said he has done 24-hour races with just a high-calorie sports drink and gels. Mike said I just may need to be more creative with the stuff I eat to find something more palatable. He said Chris Eatough, for example, used to eat gummy bears and powdered donuts. Mike K did a 24-hour race and laid out a smorgasbord of food so that when he came through the pit he could choose something he wanted to eat, depending on how his stomach was feeling at the moment.  I guess I just need to experiment with some different foods and see how it goes. 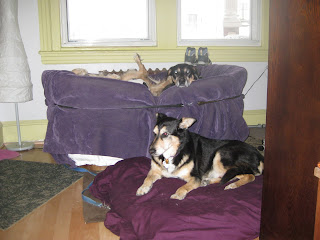 So I got back to Bethlehem, reset my GPS and headed home to 3 canines who were overwhelmed with joy to see me, although Ian had taken very good care of them, and had become charmed by Madison as I knew he would.  Overall I am happy with my performance at the camp.  I learned a lot about bike handling and my technical skills started coming back.  I learned about my weaknesses in regard to riding and nutrition and how I could correct them.  And I discovered that some of the most incredible trails in the country are right in my backyard, so to speak, in central Pennsylvania, and how they will be showcased in the Transylvania Epic which will be like no other race in the US.  I will undoubtedly achieve a bump in my fitness as a result of riding for over 20 hours in 4 days and climbing 13, 500 feet.  And most of all I had a great time doing what I love the most with a really fun group of riders.  Thank you to Mike for making me an offer I could not refuse and for my compatriots, Brad, Joe, Laura, Mike Festa, Mike Bowen, Jorge, Chris, Robbie, and Sarah.  It would not have been the same without you!
For all of the pics from the camp, click here. 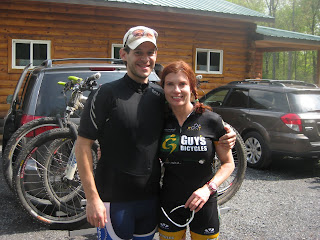 Mike Kuhn and yours truly
posted by Unknown