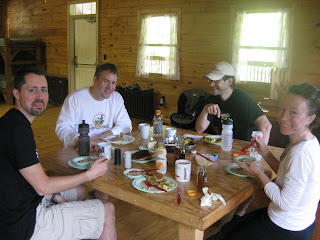 Today I got up before anyone and made a badass breakfast. Whole grain pancakes, scrambled eggs with sauteed portabella mushrooms, spinach and cheddar cheese, and fresh coffee. Keep in mind that I don't drink coffee anymore, but I brought it to make for everyone else because you can't expect coffee drinkers to be civil in the am without their fix.  When asked about my need to take care of others needs I reminded the asker that I am the zookeeper after all.  Anyway, Laura made some excellent steel cut oats with currants. We ate like kings until we were all stuffed and did not get in the car until about 10:30. 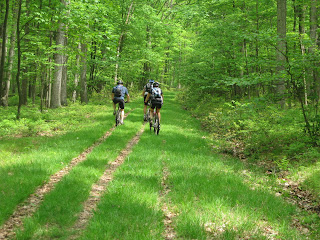 We drove to the Rothrock State Forest trails which will comprise Day 6 of the TSE. We started with a 3 mile gravel climb that wasn’t even part of the race, I think Mike just wanted to make us suffer before the reward of the long gravel downhill, it seemed like dropped forever, a good 4 miles, what a rush. We went on a doubletrack trail, Little Shingletown Road, through a seemlingly enchanted forest where we stopped to take a pic: I think this one is going to be on the TSE brochure next year:


I can’t even describe the beauty of the trails today. The riding here is as sweet as it gets. Once again, I feel the overwhelming desire to my house in philly on the market and move up here.  I would miss some things about the city I guess, but not too much. 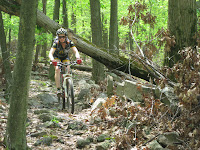 We then climbed another 2.5 miles on a rocky, grassy, double track climb, my legs did not like that. Probably because we stopped for 15 minutes to take pictures and my legs were stiff and we went right into the climb. I could not get in a flow because of the small rocks that wobbled and sucked your energy as you rode over them. The three bridges trail was magnificent with logs and crazy rock gardens which were mostly rideable, we practiced some of them and Mike took more pics and gave us some tips. I was really happy that my technical skills were starting to come back, as that was one of my goals coming to the camp. 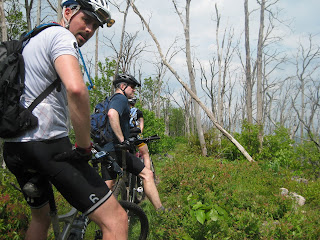 We hit a ridegetop trail on Tussey mountain; it was an incredible view on top of the mountain because there had been a forest fire and the top trees were leafless spikes that stood up like giant gravestones on the mountaintop.  The trails was fast and rocky with intermittant rock gardens and logs.  The flow was such that you could get a lot of speed, the riding was just too great to take it easy.  I was out front and I took off like a bat out of hell and dropped everyone (Mike was back there coaching, no I would not have dropped him). It felt so good to be going at XC race pace instead of the super slow endurance pace I had been going for the past few years. 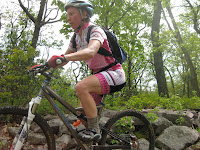 We were stopping a lot to wait for Laura, who was struggling today.  That was painful because when we stop for 10 minutes my legs get tight again. Also we were supposed to do another 10 miles or so of riding but Mike had to cut it short because it was just getting to be too long of a day. By the end of the day we had 3:40 of riding time but we were out there for almonst 4 and a half hours.  That's the way it goes sometimes as these camps, you can't complain to much about waiting because there are times they group might be waiting for you.  As for me, overall my legs performed incredibly today for the morning after a late ride of 31 miles.  But it was only Day Two.
We finished the day with a fast fast doublettrack descent, Mike out front, me close behind, watching his lines carefully and trying to use my brakes as little as possible.  I am not sure anything in life is as fun as this is.  All I know is this race is going to be incredible, it will be an epic journey to remember.  I think I'm going to do it next year. 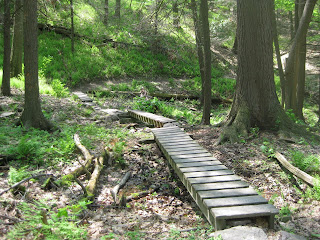 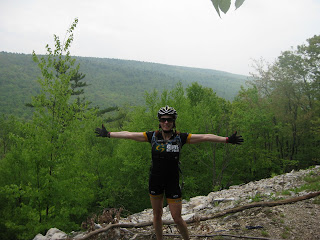 Andrea,
Thanks for taking the time to write about our days at the TSE camp. The planning and rides were brilliant (thanks Mike), and I really enjoyed meeting you, and the other camp members because of / in spite of their sense of humor (ha!). What a fun group. I would like to go back next year, and bring some more women from NC.

By the way, please send the name of the sunglasses if you come across it.