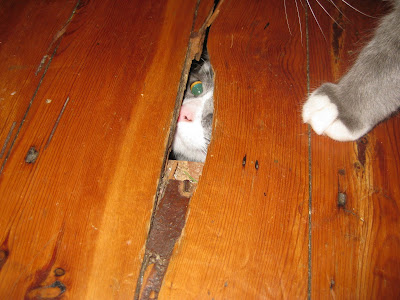 This morning when I walked into Colin's it smelled like cats.  icky.  Despite the fact that the little fur-balls were swirling their bodies and tails around my legs in an attempt to remind me that they were hungry, I immediately went downstairs to the basement to check the litter box (I had cleaned it once already since the bastard has been in southern Cali for going on 10 days--working his tail off at the Cadence Cali Camp and having to endure junk mile after junk mile, poor thing) and the sight as I gingerly stepped down, my 4-inch sandals crunching the pellets of litter on the stairs, was uber- GROSS.  Chimay and Lokie had  dragged a plastic bag across the top of the box, and then shit beside the box, no joke.  And the poo was not of the solid kind, mind you.  I did not know where to start and the smell and sight of it all was making me feel queasy.  I decided there was no salvaging that litter and the whole thing had to go.
So I grabbed the rake and my hand touched more semi-solid cat poo as one of them had clearly made sure whomever had left them alone for 8 days was going to pay by smearing the rake handle with his excrement.  I thought of dousing my hand in gasoline and setting it on fire....but since I could not find any I cleaned up the crap on the floor and grabbed the whole box and took it outside.  I  washed my hands and then tried to find trash bags, no dice.  So I grabbed the kitchen trashcan and dumped the whole box in there....only to find that there was an inch of urine-soaked litter glued to the bottom of the litter box.  At this point I had to concentrate to keep from throwing up.  I was starting to sweat and the commuters across the street waiting for the train were looking in bemusement at the woman in chunky heels slamming a dirty litter box against a trashcan.  I thought of leaving it that way, throwing some fresh litter on top and letting Colin deal with it but I could not do it.  He would come home and the whole house would smell of ammonia. Ugh.
So I managed to scrape it off and fill the catbox with fresh litter.  I left the towel wrapped rake for Colin the Cat-Lover to deal with, since he would be well rested after a week of recovery rides.  Then I fed the furry little carnivores, cleaned my hands about 6 more times, and then jetted off the Cadence to drop off the Yeti yet again.  ^%#%^&!
There was a time when I dreamed of raising a kitty and a puppy at the same time.  They would be best friends and I would have a picture of them curled up together behind my desk at work.  Then I ended up rescuing 3 dogs and they were not feline lovers.  Not one little bit.  (insert video here Ian) And as I got older the thought of paws that had been in the litter box jumping up on my couches and on the counters where I prepare food relieved me of the desire to have a cat, as much as I once fell in love with the Ragdoll of one of my ex-fiances.  (There was only one really, the other one I stupidly married, but that's enough of that tale) 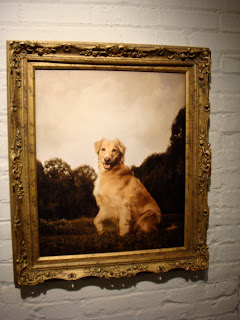 As gross as dog poop is, for the most part it is a phenomenon you only have to encounter outside of your abode.  Most of the time anyway.  I don't like the concept of animals defacating in my house.  Then again you don't have to walk cats but truthfully, walking Gryphon Madison and Chloe is about the only time in the day when I get to relax.  Except when a cat is chilling under a car next to the sidewalk and Chloe and Madison lunge at it, jerking me back to consciousness from whatever I was plotting or daydreaming about.

So the moral of the story?  Animal-love definitely is not a cakewalk all the time, when you have an animal, you sign on for the duration in my book.  There is no dropping off an aging animal at the SPCA that you are tired of seeing throw up on your rugs.  You take the unconditional love and affection they give and in return you take care of their (usually) simple needs.  A lot simpler than with children, as the animals never grow into teenagers and tell you to go f@#$ yourself.  I'll take cleaning the catbox any day over that.
posted by Unknown