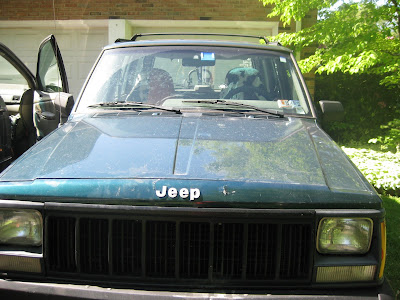 Last week I said goodbye to the my truck, which I have been driving  for the past 11 years.  The Jeep Cherokee was 3 years old when I got it in 1999, which would put it circa 1996.  I knew I would be driving it for as long as possible, as it had suited my lifestyle well, but over the past 4-5 months our relationship had gotten rocky, and I knew it had to go.

There was a lot of nolstalgia attached to that hunk of metal and rubber.  It was the vehicle  I used to drive down the shore with every weekend for 4 years when I was dating Rich, with my trusty dog Gryphon strapped in the back seat.  It was the vehicle that drove me to bike race after bike race, as it was the perfect car for camping and racing.  When I rescued nine 6-week old puppies from the junkyard 8 years ago, I scooped up each little furball and placed them in the back so they could huddle together for warmth and comfort while I took them home to the upstairs room in 3434 on that bitter cold day in February.  They would live in the house I had just bought until they were adopted, all except for littermates Madison and Chloe, who never left. It had towed a trailer filled with mulch, sod, or mushroom soil time after time.  It had towed my motorcycle on the back of a landscape trailer.  It had brought home bags of topsoil, stones and sand from Home Depot, bricks I had picked from rubble in  North Philly, as well as carful upon carful of flower flats from Holods. It had bussed my brood to the vet and to the park to visit with their doggy friends time after time.

What is nolstalgia anyway?  Isn't it just a tangled vine of an emotion that attaches itself to certain objects and memories that have impressed upon us particularly deeply?  We can recognize it as such, prune it and put it in its place, or we can neglect it and let it grow unrestrainedly until eventually it becomes larger than the original memory ever was.  It can strangle those memories by tricking us into thinking that the past was better than the present or even the future will ever be.  Nolstalgia can be intoxicating and sweet, or it can sour our efforts to live squarely in the present and keep the past in its place.  I choose to smile when it shows up and then let it go.  I see others letting nolstalgia get the best of them until they believe that nothing in their present can measure up to that magical time in their lives when the world was theirs to explore and plunder.  The past takes on a mythology that the present reality, chock full of chores, frustrations, boredom and stress,  cannot even touch.  But it's just that, a myth.

So I was surprised when I was able to give it up so easily, especially since I had not had a car payment since 2004.  But as I said, the end was drawing near, and even though many people, usually former Jeep owners, would shake their heads, chuckle and affirm that the car would indeed run forever, I knew that it wouldn't. I'm just not that lucky as most of my friends know by now. It had started to nickle and dime me.  I got into two fender-benders within the past 6 months, trashing my perfect driving record.  When Joe Long put the front grill back together he did not bother replacing the radiator, and I knew once the hot weather hit and I had no AC that would be the end of my patience.

Then on mothers day this year my alternator went, and I woke up my mom up so she could rescue me from a late-night visit to Bryn Mawr Rehab where my Dad was convalesing after his bike accident, by driving in front of me so I could drive the Jeep towards home in the dark without headlamps on.  Every few miles we had to stop and I would jump my battery from her Toyota, until we finally we abandoned the car at a gas station when that plan failed to work and the next day I had it towed.  Total for new alternator, labor and towing = $400.  That was 3 weeks before I got my new wheels, what a shame.

As for my new wheels, well, here is where the guilt part comes in.  I did not want to drive a budget car anymore.  I wanted a small SUV since my lifestyle demands it, but the Ford Escape hybrid was just not doing it for me.  The Honda Element has a 4-cylinder engine and it too damn slow.  I ended up looking at the Infiniti EX35, and it was pretty much love at first sight.  However, the gas mileage was not much better than the Jeep, although it burns cleaner.  I test drove it on a Wednesday night, and they ran the numbers by me, ouch, it was too much. A few weeks prior to this I was telling Matt from work that I was looking at luxury cars but the payments were so damn high, and I was thinking about leasing.  We had hired Matt because he was a hardass, for want of a better term, who could stand up to the General Contractors on behalf of Liberty so they did not take advantage of us in the rough a tumble world of Philadelphia commercial construction.  He did his job with relish.  He offered to help me negotiate a better deal.  So I texted him from the dealership.  The salesmen did not let me leave the showroom until they came down a bit on pricing in an effort to have me buy the car before I walked off the lot. They offered to install the hitch rack for my bike rack, etc, but they still wanted $2500 down.

The next day Matt strode into my office.  "Get the guy on the phone" he demanded, by the "guy" he meant the salesman at Infiniti of Ardmore.

I dialed, and Chuck DeSantis got on the phone. I identified myself and Chuck asked how I was doing.  I had him on speakerphone, and suddenly Matt broke in and said, "Hey Chuck. This is Matt Lerner."

"Who are you?" Chuck asked, suddenly sounding a bit more south-philly than Main Line. 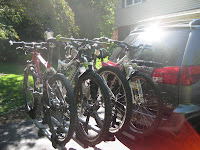 "This is Andrea's ex-husband, and my alimony has to pay for this thing, so you gotta give me a better deal!"  At this point I was covering my mouth so I would not bust out laughing.  By the time he was finished beating up on Chuck, Matt had negotiated a no money down, 36 month lease of a 2010 infiniti EX 35 in exchange for my old Jeep, and the dealership would pay for UHAUL to install my hitch for my bike rack, as well as throw in the crossbars for the roof rails in case I needed to get a Thule carrier for all my camping shit, since the EX was a bit smaller than the Jeep.  I got back on the phone. "So when would you like to pick up the car?" Chuck asked me.

"um...." this was all a bit of a shock to me.  I had just test-driven the thing the night before.  I had not really done much research on other cars.  Sometimes it's just like that though, love at first sight.  And people tell me I can be impulsive sometimes.

"I guess tomorrow," I mumbled.  Chuck was delighted.

"Great, we will have it ready for you." And that was it.

The beast had 167,000 miles on it when it finally was traded in.  I pulled up to the dealership and three bros who were employed by the dealership to detail the cars were on break, sitting in the sun on the curb.  I walked up to them.  "How can I help you?" one of them said politely.

"I am trading in my Jeep today, and there is some really high-end stereo equipment in there, 2 amps, a bazooka, etc.  It's a bit old but it works great, are you interested?"

The three of them jumped up and inspected the goods.  Damn!  I'm all over that shit, one of them said, as if to say you would never know all this shit was hiding in that hunk of metal.

"I gotta go get a screwdriver!" one of them said, jumping up.

"There's a cordless drill in the backseat, " I told them.  "I would get that stuff out of there as soon as you can and keep it on the down-low." I smiled and walked into the dealership in my heels and minidress.  It was 88 degrees.

By the time I got out of there, 2 hours later, they had my car stripped.  They had dropped the pretense of formality and were now thanking me in their own dialect, it was funny.  Even funnier is that the car had almost died on my way to Ardmore, I could not get it started outside of Cadence, so really was most likely headed for the junkyard.  And I had gotten $2500 for it. Thanks Matt!
So now I have a gargantuan car payment. I did get cold feet a few days later, but there was no backing out now. I will have to cut some of the fat out of my spending in the coming months, which will be painful, but I can do it.  Sacrifice is not so hard for me anymore.  And frankly, for driving a fourteen year old car for so long, I deserved this, right?  Guilt never did any good for anyone anyway.

Although the most acute judges of the witches and even the witches themselves, were convinced of the guilt of witchery, the guilt nevertheless was non-existent. It is thus with all guilt.