So a few weekends ago was the big bike race in Philadelphia, known offically this year as the TD Bank Philadelphia International Cycling Champoinship  Of course it is the big day of spectating for all of the road cyclists for miles around.  I blew off a MASS endurance race at Iron Hill which had been rescheduled from May for some reason but this day of fun was not to be missed. 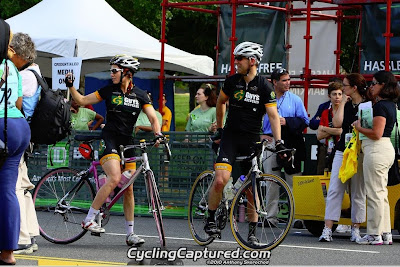 The weekend started out on Friday night with a party at Cadence honoring the Bahati Foundation Cycling Team.  Rahsaan Bahati, Cesar Grajales, Nathan O'Neill,  and Jason Donald were there and Cadence threw a party in their honor.  At some point in the festivities Nathan O'Neill introduced himself and we started talking about race nutrition among other topics.  I explained how I was having such a hard time downing enough calories during races and rides because food makes me sick as soon as I am training hard. I have to force it down.  We talked about the methods you use to train your body to utililize fat as fuel rather than solely muscle glycogen.  I read a book on this topic by Stu Mittleman a year ago, Slow Burn, but having a pro cyclist discuss with me how he manages to do this in the real world was interesting and invaluable.

Saturday morning was hot and humid.  I did the Cadence ride, which was easy, but fun with 100 people, it seemed like I waited the whole ride to get a chance up at the front.  You know, so I could climb into my endurance zone.  Afterwards I went out with some teammates for another 10 mile loop or so.  We hit some hills with Todd at the helm. It was hot, I was melting.  Got back to Cadence and I think I went upstairs and drank a gallon of water.  Throughout the morning various pro teams were coming and going.  I was just about to hop on my bike and go home when Soren Petersen from the Danish National Team lilterally stopped me in the doorway.  He asked me straightforwardly how I was doing, if I had finished my ride, and if I were racing tomorrow.  I looked down at my old bike and wondered how he could have thought that.  "Hell no, I'm an amateur," I said with a smile.  It was kind of funny.  "You should feed for us," he stated, and before I knew it he had pulled the Director over to me and Dave Sommerville took my cell phone number.  He told me to call him in the am before 8. 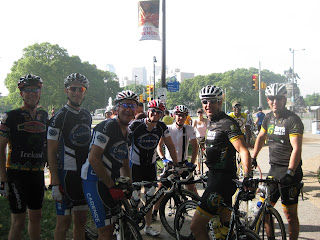 Which I did, I met Todd, Larry and the boys at the shop at 7:50 and while I was waiting I called Dave  who was driving the team car.  He put me in touch with Dave Berson, and after riding the course and then going home and showering and changing into shorts and a t-shirt I hopped on my bike and rode down there with my backpack. I ended up getting a pass to get behind the scenes and pass water bottles to riders blowing past me at 35mph.  It was pretty cool, almost scary.   So I'm under the tent waiting for the next opportunity to feed and suddenly Dave's wife snaps a photo of me, "they said they wanted a hot chick to feed them, " she explained, I found out later that she and Dave had hosted the entire team for the week so in retrospect the whole exercise of reeling me in was a plot to make the Danes happy but that was OK with me.  It was a fun experience and only took about an hour.

view in front of Cadence before the start 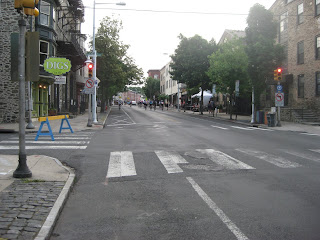 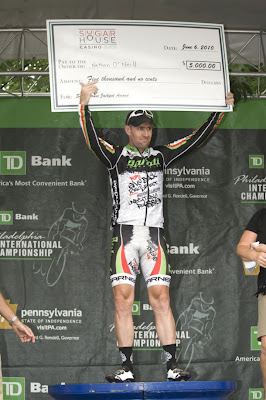 Nathan O'Neill top sprint winner
As I was down there I saw Nate, who had quit the race after winning the Sugarhouse Sprint competition.  We joked about bluffing our way into the VIP tent for some grub but then I decided to head up to Lemon Hill instead as I was getting a bunch of text messages asking where the heck I was.  I finally made it up there to catch some of the last part of the race, where I took this video above. 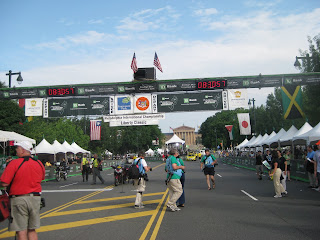 the start before the race 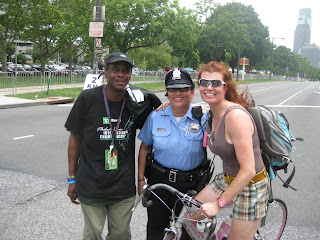 the team monitoring pedestrian traffic across the race course 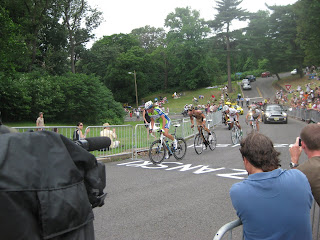 As the race wore on the winds picked up and cooled us off, although I'm sure it meant strong headwinds for the riders.  The clouds rolled in and the skies looked ominous.  Colin and I rode home, me on my Orbea and Colin on his commuter bike that got stolen from my front porch a week later.  As soon as I stepped up onto my porch I felt the first drops of rain.
posted by Unknown