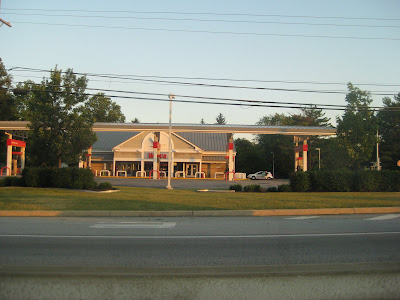 a suspiciously empty WaWa parking lot
Ok so Thursday I took the day off from work so I could head up to M’Ville and help Mike out. I would have liked to have left by 2, but by noon it was pretty apparent that this was not going to happen. I had not even started to pack and well.... I’m not such a good traveler so packing is quite a project for me.

Around 3 I was loading up the car and the skies looked really ominous. I decided I had better get everyting loaded before it started to pour and I opened up the hatch and ran into the house for another bag. In a matter of seconds it was coming down in buckets. I ran outside, hoping the key was in my pocket so I could close the windows. You don't actually need to put the key in the ignition to start the Infiniti, it just has to be somewhere in the car. I pushed the start button and the screen read “no key", alhough to me it was, "no dice." Crap. I ran back into the house, completely soaked now as were my leather seats, and I grabbed my spare set and ran back and out closed the windows. I finally got the car loaded up and hit the road at just about 5 pm. Rush hour traffic in Philadelphia, perfect timing. 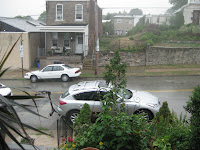 The gas station at the bottom of the hill had police tape across it, no gas for some unknown reason. I decide to get the hell out of dodge and hit 76 west and get gas on the turnpike. Big mistake. It turns out once 76 becomes the turnpike there is no gas until the Downingtown exit. My guage flashed that I had 20 miles until I needed to refill. I was cutting it really close and started to wig. I called a friend for moral support as I was caught in stop and go traffic heading towards the exit. My guage started flashing with dotted lines, meaning (I thought)  that I was a few miles from running out of gas. I was freaking out. I finally made it to the exit and used the Infiniti GPS to direct me to a gas station. When I got there I was ready to get out and kiss the ground I was so happy to have made it, but, wait, someting was wrong. There were cars everwhere, no one pumping gas, and people spread out on the grass trying to survive the heat. WTF? It turns out a tornado had blown through there and everything in town was closed because of the lack of electricity, I mean we are talking gas stations, restaurants, Wawa, Starbucks, the whole shebang. So everyone was waiting at the station to see if the electricity would come back on before they ran out of gas. I guess they all stupidly forgot to fill their tanks before they left the city too. 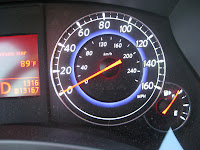 So I found a local Wawa that was down the road and headed that way, praying that I would make it. When I got to the Wawa it was shut down for the same reason. At this point I was sure I was going to run out of gas so I pulled into a bank parking lot and set up my camp chair. For an hour. Until I talked to some local residents and realized the situation was not going to be changed anytime soon.  I finally ventured to another gas station down the road, with Colin on the phone, I was sure that I was not going to make it, and we realized that Colin had driven to the Great Valley training crit and he was only about a mile from me, so he waited around to make sure I got to the station...which I did. I filled my tank. What a waste of 2 hours.  After that there was terrible traffic due to a lane closing, so by the time I got to M’ville it was too late to do much but lay out my stuff, greet Mike and the Oesterlings, and head to bed. It took me 4 hours to get there from Philly. 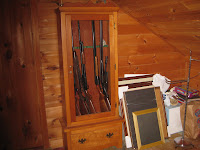 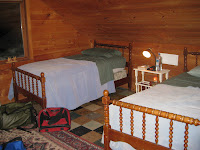 I set up camp in this really cool attic room with a gun cabinet (everyone needs one!) and my own little double bed. I had it all to myself tonight at least.
posted by Unknown