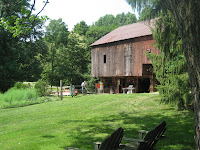 Got up early and had my granola and raspberries. It was quiet at the farm, the calm before the storm when the campers would arrive. The NTT course was already laid out, so I headed down the the basement, out of the heat, and opened up 10 boxes of prizes, organized and tallied them. This way Mike and his team could just come in and make up the prize bags quickly as needed without having to rummage through box after box. I then organized 200 t-shirts by size, folded them, and stuffed the swag bags. It took a few hours. Then my roommates showed up. Mike and Erica Yozell arrived with their baby, Isaac. I was sharing my attic room with 2 adults and a baby and they informed me when they arrived that young Isaac was teething and would be up every hour and a half. Yikes. I ended up sleeping on the couch for the rest of my stay and made use of earplugs and a sleep aid, since I had not slept well in weeks. 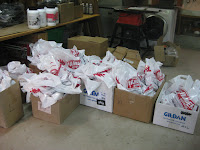 My legs were tired and stale from the 4 hour journey and I wanted to pre-ride the course early but it became apparent that that was not going to happen.  I was installed as the "meet and greet" person to direct the campers as they started pulling in at 2. I sat in my camp chair for 2 hours yapping on the phone and telling people where to drop their shit and park their cars.

Finally night fell, and the first riders went off.  I was not up until 10:30 or so.  I tested my lights before my ride and they were intermittently turning off, so I changed the battery and they seemed fine.  I felt good, and I love riding at night.  I did get a chance to pre-ride it and the course was really fun; it had a great flow, some technical bits (of course) and it was fast.  I felt as if I would do well tonight. 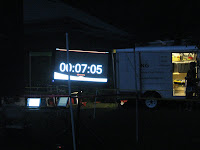 So lined up  and waited for the ref to tell me to go. Off I went and flew into the woods, rode well for about 6 or 7 minutes, got into some twisty stuff and clipped a tree with my helmet.  I slowed to adjust my helmet, it was loose. I could not tighten it, and worse, my light had turned off.  Great.  I managed to get the light on, but the inner cage in the helmet had snapped so the helmet was only resting on my head.  Forget about the danger aspect of that, the bad part is that I could not get the light to shine where I needed it to to ride.  I tried to amble along awkwardly a bit like this but my light kept shutting off and when it was on it was all over the place, not on the trail where I needed it to be.  So there I was in total darkness.  I moved off the trail and started heading to where I heard the music, out of the way of the other riders. I got lost a few times but then the light came on and I dragged my bike through the woods for 10 minutes until I finally found my way back to the start.

"What happened?," Mike asked me, putting down the microphone.

"My helmet broke, " I said, "and this light is a piece of shit."  I had signed up to get a trial Lupine tonight but somehow that never happened.  Mike Hebe chimed in that I could use his helmet and light. 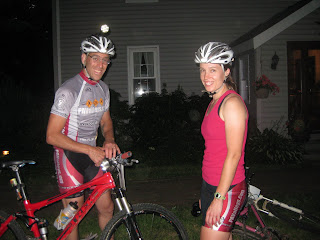 "You had better get back out there or you will get a DNF for the stage," Kuhn said.  Fine, so I slipped between 2 other riders and got back on the trail.  The light was focusing too far ahead of me on the trail, probably because Hebe was a lot faster than me and needed it to focus farther from him....but not this far, it was focusing halfway up the damn trees! So I stopped for a second to tighten it down and in doing so I broke the cage. Again.  No shit.  This was turning into an Alfred Hitchcock movie, "The TT From Hell."  So with another helmet rendering my head into a bobble-head caricature of sorts, I managed somehow to cross the finish line.  In something like 48 minutes, dead last.  That of course included a lap and a half, 10 minutes of fumbling in the woods, and a few minutes behind the start switching helmets.  Not bad when you take that into account!  Seriously, I was pissed, since blowing this stage meant possibly blowing my chances for a decent finish in the GC, but I was going to have a good race tomorrow anyway.

Hebe was at the mic when I got in and announced to the crowd, "Hmmm. Andrea has another broken helmet. You have to wonder when one rider breaks two helmets in one TT if it is maybe the rider..not the helmet."

He forgot to mention when he handed me his helmet that the cage was broken and he had zip-tied it together, which is why when I tightened it down to fit my smaller head it broke.  Thanks Mike.  I'm going to tell your GF to buy you a new one for your birthday. 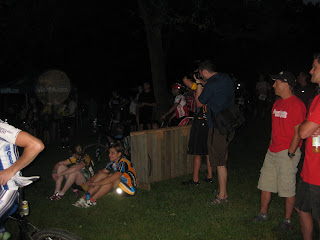 where the hell is she?  do we need to send out the search dogs?
posted by Unknown