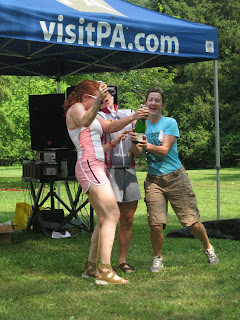 Not too much to say about Sunday in terms of racing, the STXC course was awesome, a great mix of field and little singletrack sections to make it interesting.  My wrist and my peach were both throbbing in pain, and my legs were not happy either.  I remember saying, in my attempt to convince myself that I needed to go out for an 8th lap on saturday, that if I did my legs would be noodles for the STXC.  Which they were.  My finish was not very strong.  So I can't tell you how surprised I was when they were announcing the awards and they said I was third in the GC.  I mumbled out loud, "how did that happen?" considering my poor showing in the NTT and the STXC, but I went up to the podium, shared some champagne with Nicole and Carolyn (we were told later that this was lame so the boys showed us up, see below) and received an envelope full of cash.  Very cool.
As it turned out, I found out later in the week that the timing company had rushed the results out because people were wanting to leave (many already had, as some of us have families and jobs we have to attend to) and they had bumped me to third in the GC when I was actually fourth and Rebecca Frederick was 3rd.  I did end up returning my cash to Mike who forwarded it on to her, but hey, at least I got some good pictures out of it.

But honestly one of the best parts of Sundays at the Stage Race is the Huffy toss.  That damn bike weighs upwards of 60 pounds and I could barely drag it up the hill much less get any distance out of it.  My attempt was somewhat weak, but Mike Festa's was weaker: 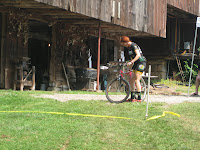 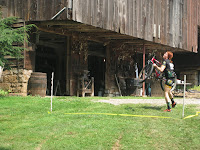 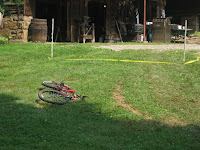 Kuhn had these really cool wooden medals made for all of us who did all three stages.  Here we are (the ones that were left late Sunday) sporting our medals: "3 days/3 stages/one badass - me" 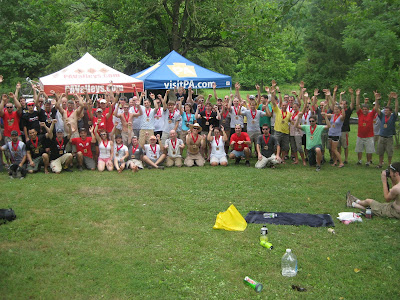 Anyway, the weekend was a ton of fun and I'm looking forward to doing it again next year. The Stage Race is fun not only for the racers but for their whole families, so really I don't understand why more people from my team don't do it.

Anyway, here is the link once again to all of the pics, enjoy.  And come out next year and join us.
posted by Unknown

I may not have thrown it very far... But my baselayer/wife beater shirt and single white glove (in tribute to the late Michael Jackson on the date of his death) won the style competition.

Actually my favorite part about that video is your wife saying, "don't embarass me," then calling you a "dufus" and you exclaiming, "let's see you do any better. " Ah, married life. Good stuff.