I don't think words can describe what it feels like to lose one's child. In this case, that child was a beautiful mutt who had spent the last 10 years of his 11 year life with me. Gryphon had definitely been getting weaker in the past several months and I had always known he was not going to live a terribly long life because of the hardships he had suffered before our paths crossed in 2000. But I was hoping get a few more years out of him, and I had no idea that the denoument of the week from hell was going to be him having to be put to sleep.

Back in 2000, I was walking to my motorcycle on a cold winter day after work at my parent's flooring company. Apex Carpet was deep in North Philly, and for those of you not from these parts, that is pretty much the worst of Philadelphia. I walked down the street towards an old garage with a crumbling down roof when I heard something strange. There was a metal door with a large metal chain holding it not quite shut and there, whining and scratching, I could make out the slim muzzle of a large dog. The next day I saw him again, so I asked Matt, the old black man with congestive heart failure who my father had rushed to the emergency room many times, why there was a dog in his garage. Matt told me he had gotten the dog for "protection."

"Protection is fine, Matt, but when is the last time you fed him?"

"Awww....he goes out and feeds his damn self" Matt grumbled. I rolled my eyes. Dear Lord.

Matt had one of his tenants fetch "Rocky" as he was called back then, and out rushed this emaciated, dirty, smelly mutt, wagging his tail madly. When I walked over to him he immediately rolled on his back and wagged his tail as if to say, "please rub my belly." What a sin.


I went out and bought some crappy dog food, as that is all that the corner store at 21st and Westmoreland carried, and Rocky ate all of it. Every last piece of kibble. I gave him some clean water and marveled out how much he stunk, the poor little beast. It turns out that Rocky spent most of his young life locked in Matt's filthy dark basement where he defecated in a corner. This was just too much for me. For several weeks I walked him and fed him every day, while I inquired around to see if I could find someone to adopt him 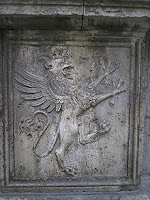 One day I decided to see if he had any food aggression issues because if he did the chances that he would survive a shelter without being put down were pretty slim. I had noticed that when my foot touched the flimsy disposable aluminum roasting pan I was using as his bowl in order to steady it while he ate, he growled a bit. Hmm, not good. I put on my large leather motorcycle glove and pulled his food bowl away, and he growled and went straight for my arm and bit the glove right in the middle. Thank god for leather. I pushed him back, hard, and he got the message that that behavior was not tolerated with me, but I knew I had a difficult case on my hand. This dog, in his current state, would not be able to be in a home with small children, and would never survive more than an hour at the SPCA.

I was able to get a woman who owned the barn where my older sister stabled her horse to agree to take the dog if I got him neutered. I was living at home with my parents and they had a cat, and besides my father always pretended he did not like animals and they were absolutely not allowed in the house.

One thing I knew is the dog needed to get out of Matt’s filthy house. I convinced him to give me Rocky, and I brought him home, but I didn’t know where to put him.  It was friday night and Rich was on his way up to take me to dinner, and I was late as usual.  I finally tied him to a tree on my parent’s verdant lawn, fed him, put a bowl of water next to him, and then left to get dinner. When my parents arrived home it had started to drizzle, and there was this poor wet dog, looking forlorn and sad under the tree.  They took pity on him and put him up on the back porch. The next day Rocky got a bath. I had to scrub him 3 or 4 times to get the smell out. Numerous calls to the woman who was to adopt him yielded no response, so I got the message she had changed her mind. Horse people are so wacky anyway.

So Rocky became Gryphon, as he hds moved from North Philadelphia to swanky Radnor township on the Main Line, whose symbol was a gryphon. I took a very sturdy 4 layer cardboard box that Milliken 3x3 carpet tiles come in, cut a hole for a door, and placed it on a skid on the porch with a dogbed and loads of blankets.  I hooked up a line from the house porch all the way to a tall tree in the yard so Gryphon could “patrol” the yard and keep it free from deer, fox, rabbit, Canadian geese and groundhogs. He would sometimes get tangled but I was usually nearby to rescue him. Each night I would curl up with Gryohon in his house under the blankets until he was asleep, and then at some point I would wake up and crawl upstairs into my own bed.  I even had a little space heater in there.

Back then I was barely ever home, as each weekend I would drive down to Sea Isle to spend the weekend at Richard’s house. The first time I took the dog he got lost somehow. I was so upset but consoled myself that it was a barrier island and he would not get far. We called the cops and they were patrolling, looking for him. We looked for hours and I was starting to panic. Various people would report sighting him. Finally I was walking down a side street and I spotted him, walking up to people wagging his tail. “Rocky” I screamed (he did not know Gryphon yet), and the dog turned and came running towards my waiting arms. I think the dog decided then and there that he was never going to let me out of his sight again because from that day until he got too old and frail Gryphon never let me enter a room without following me. He was nicknamed my “shadow.”

We took him to the beach and he gleefully ran down the broad expanse of Sea Isle sand, barking and chasing the seagulls. He was not incredibly fond of the water, the waves scared him, but one time I was swimming in the surf and Rich was behind me. He called to me to turn around and there, paddling in the surf, was Gryphon, blinking when the waves rushed towards him.  He was determined not to let me escape via ocean. I pulled him out of the water, dried him off and gave him lots of kisses.
Richard had several boats in the 6 years that we dated, at the time it was a uber-fast cigarette boat. Gryphon used to sniff the air as we flew by at 50mph, his fur rippling in the wind. He did not, however, jump in when I went swimming in the open ocean, free of life guards and kids on boogie boards.

And that is how he came to be mine.  Stay tuned for more.