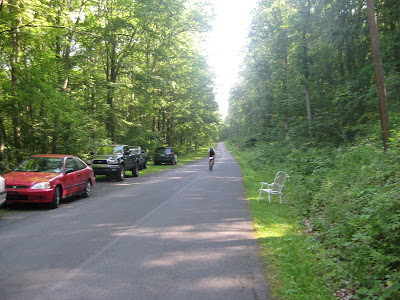 Today I am at the Wilderness 101 supporting Nathan. I was not planning on doing it this year anyway, I figured a needed a bit more time to get my nutrition and saddle issues straightened out. That was a month ago. Now my saddle issue had ended my season so I could not even able to use my mountain bike to get around the course. Nate, being the pro that he is, was very efficient and self-sufficient so there was not a lot I could do for him. So since I needed to be out there all day I figured I would see what I could do to help out. 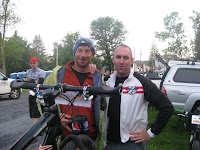 Chris Scott, the promoter of the 101, the Shenadoah 100, and the Stoopid 50, came over to the car, held out his hand to Nate and introduced himself. I asked Chris if he needed any help and he stationed me at checkpoint 2, which was 40 miles into the race, 30 of those miles were gravel road or road miles so Nate should be in a good position at that point. It was the time between checkpoint 2 and 4 that were the hardest miles, lots of technical singletrack, all of which I had ridden either at the 101 camp I did last June, or else at the TSE camp this May.

As for me, who is not used to being a spectator, I am in a world of pain. I am tired from trying to block it out. I can’t sit for long, and when I do it is only with my legs spread, and of course I have a short skirt on, since I can only wear skirts right now, I can’t have anything over the nodule for more than an hour, it’s excruciating. So I have a towel between my legs. I don’t know if the pain is coming from the three holes she poked in me with a scalpel, or if this horrid protrusion is just going to hurt this much for months. I did run for 45 minutes yesterday and after that I had trouble walking. We all went out to dinner at the Elk Street Café and I could not even sit on my chair, I kept the thing hanging off the front. I did find a beautiful double track trail to run on and it was such a relief to move my body without being constantly reminded of the injury. I stopped for a second while in the middle of the woods so I could memorize where the turn was and when I stopped I could hear the thing complaining, begging me to stop. But if I stopped the pain would be crippling so I had to keep running. Afterwards I could only walk with my legs spread a little, as if from too many years riding a horse. The whole thing is pretty horrible, but I’m trying not to whine too much.

So I got the job as the “caller” at checkpoint 2, which also happens to be the furthest point out on the course. I had a nice long view of the riders coming in; they would start out as little specks down the road and I would squint until I could make out their numbers, then I would scream out their number so the other volunteers could grab their drop bags and hand them to the riders before the riders had even dismounted. I was the right one for the job, since Kristin told me later they could hear me loud and clear and I was 100 yards up the road, at least. Yeah, I have a big mouth.

Jeff Schalk and another rider rode by, and then 7 riders after them, including Rob. Shortly after that group, Nate came up, I yelled out, “Seventy-one!” and told him he was in 10th place.

“I crashed and think I broke my rib” he said, and I gasped, but I could not linger since there might be a group behind him and groups definitely are a challenge to call out, you had to be ready. Nate was a tough one though, he had broken his nose twice, his collarbone three times, his neck, and god knows what else in his 20 years racing bikes.

It’s amazing that 40 miles into a 100 mile race and there were still packs of riders. I discovered that since I needed to be facing the checkpoint for them to hear me as I yelled out numbers, I had to look at the group of riders, memorize multiple numbers in a split second (I could do 4 at a time) scream at the top of my lungs, and then whip my head back to catch a couple more. Plus it’s hard to enunciate when you are using your entire diaphragm to produce a large volume of sound. 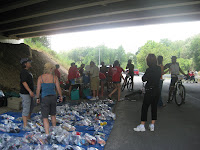 So the top group came by about 9:15, Nate probably 4 minutes later. Not too shabby for a roadie. So I was yelling out numbers from 9:15 until about 12:20, when Kristin and I and some others headed to check point 4. We were in a caravan of cars, and we got lost on the way, so not only was I not able to see Nate pass through 4, but there was a bunch of drop bags in the back of someone’s car and his were in there. The driver got out and was casually walking towards the checkpoint and told someone, “oh yeah there are more bags in my car.” I had noticed riders were passing by already and Nate was in the top 10 so I was like, shit, are you kidding me?? I grabbed another woman and told her to help me carry the box to the drop area and we put the bags in order. There were 2 bags that were labeled “71”, one had his final camelback bladder. Shit! If he was doing as well as he was doing when I saw him at mile 40 (this was mile 79) then he really needed that camelback. I was pretty upset about this.

Actually the whole checkpoint thing was a bit disorganized. Earlier I had to explain to one chick how to cut oranges efficiently and of course not listening she sliced her fingers twice and kept on cutting until another woman relieved her of her duty. Gross.

So right now I am sitting here at checkpoint 4 hoping that Nate was able to get everything he needs for the last 30 miles of the race. There is one more checkpoint. Someone else is calling out numbers which is good because my voice is getting a bit raspy.

I so want to be racing right now. It is a glorious day, low 80s and very low humidity. Some white clouds in a very blue sky. The trails up here are my favorite anywhere. Rocky, mossy, challenging, serene, epic. You can find yourself screaming down a rocky descent and wondering if you are going to make it without wiping out, and then you are in a pine forest trail, your wheels whispering over the needles and the trail suddenly dark and quiet under the thick canopy.

I am waiting until Kristin’s husband Bob comes by so we could head to the finish. I so want to be there when the top elites finish. At least I can live vicariously through them.
posted by Unknown