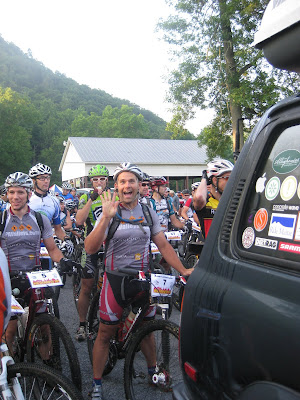 So it ended up that I did not make it back to the start/finish before the leaders, which sucked, because Nate's stuff was in my car.  He reached into the open window and opened the door, and treated his fellow Wilderness 101 racers to the sound of my car alarm for a good 5 minutes, and Chris was sure to mention over the PA system later that we don't need to lock our doors here.  Whoops.

So I was sitting around waiting for the awards with Jeff Schalk, who rocked the win with a new course record of 6:34:37, and Nick Waite, who was #3 , a pro roadie from Kenda who Nate has raced with, and some others, and they asked me what my injury was. So of course a conversation on all manner of saddle ailments ensued.  I told them about my gyno sticking me with lydocaine and not bothering to wait for numbness until she sliced me with the scalpel and then squeezed the tissue as hard as she could as I tried not to writhe too obviously in the stirrups.  Jeff looked like he was being tortured as I told the story.  Apparently  Jeremiah Bishop rode the 101 with a huge sore and had a hole cut in his saddle with duct tape.  Nick claimed he once had an induration and it was cured with a week of intensive cold laser treatment, or LLLT (low level laser therapy).  This left me hopeful that something could be done to get me back on the bike sooner than next spring.  I could purchase one of these units for a mere $4000 if I felt too shy to have my crotch massaged my some male chiropractor in some clinic, as conventional MDs generally avoid using treatments not cleared by the FDA. 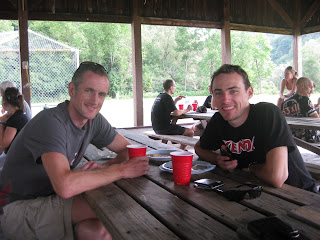 Jeff Schalk & Nick Waite after the race as we sat around trading saddle sore stories
Anyway, as it turns out on the way back from State College on Sunday the pain was so terrible that I knew something was wrong.  It turns out that not only did I have the hardened tissue, or induration, but I also developed a bad infection in the abcess where Amy Einhorn had made her first scalpel hole.  The thing was ready to explode and had to be drained.  I will spare you the gross details, but 2 days later it is still draining and now it is 1/4 the size it was over the weekend, no wonder I was miserable.  They are putting me on stronger antibiotics, Mark said I don't want to treat it casually because if the pocket surrounding my pacemaker gets infected I'm screwed.  So back to another doctor tomorrow morning to get the thing looked at.  My peach has been viewed more times in the past month than a porn star and I'm not getting paid.

So the infection is healing, next I need to figure out what I can do to get the callous to heal.  Any ideas are greatly appreciated!

Enjoy my pics of the 101.  If you are dissapointed that these posts were more about my whining than the race itself, check out this article for a play by play of the action.  Note they refer to Nate's lack of singletrack skills.  To place 9th as he did, which is pretty remarkable, he needed to kill it on the road sections (which he clearly did) lucky for him the race was 70% gravel road.  His average power (not normalized) for 7 hours was over 300 watts, and after checkpoint 4 he managed to pass about 10 riders to seal a top 10 spot.  I guess he can teach me a lot about pain tolerance.   Plus he broke a rib during the race, that's always fun.  And I thought I was tough. 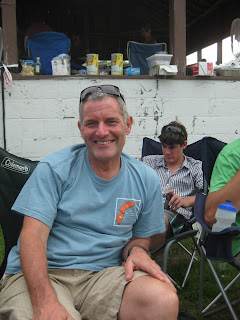