my week off part two

On Tuesday I kidnapped Colin and we headed South to Sea Isle where my parents, younger sister and her kids had been for 10 days.  There Alessandra, my 6-year old niece, showed us how to use a hoola hoop.


We got down there in the afternoon, ate lunch, unpacked 5 bags of food for the two days we were staying, went swimming in the ocean, relaxed (it happens for me once or twice a year) and then, because my legs were trashed from not riding for 2 months, and THEN riding and running back to back days since Saturday, I insisted that we ride up and down Pleasure Avenue so I could spin out my legs since I had to hold onto Colin's wheel on Wednesday's ride.  Mom made a nice dinner, we did some work (!) and went to bed. 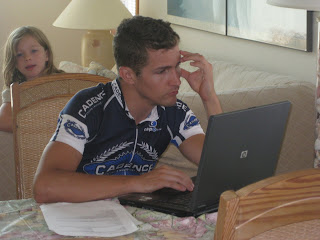 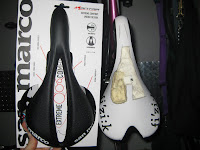 Wednesday am Colin did some more work while I took forever to get my shit together, mainly because I had made pancakes for everyone.    We finally got out and it was 96 degrees and brutally humid.  Colin had mapped out a 55 mile route.   I was riding my new saddle, the San Marco Mantra, and because we were in South Jersey the route was flat as a pancake so Colin was pushing a steady pace the whole time so he could get his endurance ride in.  After about an hour I was having trouble holding onto his wheel, and because of the headwind, I had to be 2 inches off said wheel to be able to stay below threshold.  Add to that that I was 2 months out of shape, and the constant position put a lot of pressure on the indurated spot, which of course scared me. This all made me unhappy.  The heat really started getting to me, as I had not been riding outside for the hottest part of the summer.  Soon we were both out of liquids and I had the chills and was dizzy and nauseous, but I did not dare complain. Initially.
Finally I said meekly to Colin, "If there is no Wawa up here I need to knock on someone's door and ask for water."
Day after day, day after day,
We stuck, nor breath nor motion;
As idle as a painted ship
Upon a painted ocean.
Water, water, everywhere,
And all the boards did shrink;
Water, water, everywhere,
Nor any drop to drink.


from The Rime of the Ancient Mariner, Samuel Taylor Coleridge, 1798

I could not stop thinking of how thirsty I was, and how, like Coleridges' sailors, I would kill for a cup of its sweet, pure life-giving sustenance.  But we were in South Jersey, in the middle of the Pine Barrens, and there was not much civilization around, much less a convenience store.

We finally came up to an auto body shop where 2 men were braving the heat and staring under the hood of a car.  I let Colin go and dismounted in front of a heavy-set middle aged man with a gray dusty t-shirt.  He looked at me, wondering what the hell I was doing riding in this heat.  I was in tears at this point, but he could not see them for the sweat streaming down my face.

"Could I please bother you for some water?" I mustered between my tears, "I've been out of fluids for awhile."


He led me into a back room where there was a water cooler filled with cold water!  I drank 2 and a half bottles in about a minute.  By this time, Colin had circled back and filled his water bottles too.
So we got back en route, and ended up in a dead-end when Route 9 emptied into the Garden State Parkway, Colin's iphone app neglected to warn him about that one. The sun was unrelenting and there was no shade at all.  I had been hanging onto his wheel for dear life, my legs crampy.  We rode across an old bridge where a number of people were fishing.  They must have wondered where we thought we were going, because when we rode a little farther, dodging broken glass and debris (it was the local unofficial dump apparently) we came upon this ditch, about 5 feet across.
So we circled back, and finally found a way back towards Sea Isle.  Now by this point my legs were basically in revolt, and so was my brain.  There was a battle going on in my head and it sounded something like this:
"I can't keep holding onto his wheel, I'm dying, I'm just going to let him go and ride back to 78th street at my own pace (this was 20 miles away)."
"Andrea, just hang onto the wheel, there is no WAY you are going to whine to him to go slower."
"I'm above threshold, I can't do it."
"That's because you are 5 inches off his wheel in a headwind.  How many times do I have to tell you you need to be 2 inches off his f'in wheel?"
"I'm just going to let him go and ride back by myself."
"If you ride back by yourself alone in this headwind, you will be either above the power you are holding now, or else it will take you 2 more hours to ride back at 11 mph and you will perish in this heat. You have NO CHOICE but to hang onto his wheel so stop whining."
This went on for awhile, while I melted in the blistering sun, and twice I let his wheel go. My one foot felt like it was on fire and I needed to get off the seat to take some pressure off my sit bones, as my new saddle felt as if it were fashioned from cement.  Actually, I was pretty much miserable physically, mentally and emotionally. When Colin realized what had happened, (I could not bear to admit defeat and actually shout that I needed him to slow down) he said, quite amicably under the circumstances (this is why I could never be a coach) that I needed to tell him if I was getting dropped.
And then I did something I have not done in years, I mean the kind of thing you do when you are a newbie rider and you go out on a ride with a more experienced cyclist who you also happen to be sleeping with. (trust me if you weren't he would not be caught dead riding with you).  Of course various boyfriends of mine over the years have been just as outmatched and miserable riding with me but they knew better than to bitch too much because in our culture, let's face it, straight men are not allowed to have meltdowns, at least not if they want to get laid. Ever.  But this was worse, because this was not my boyfriend, this was my coach.
So.....I told him to just go home at his own pace and I would ride at mine. Actually, I begged him, unashamedly.

"Andrea, no. I'm not leaving you here in this heat to ride back at 10 mph."
"Please, just goooo, I'm fine."  Wow, I was really in full "rec rider" mode; I mean they might revoke my cycling license over this.  Full pout and everything.
"No, STOP, I'm not leaving you here.  It's NOT an option, so just tell me when I need to slow down."
"I just need to take my left shoe off for a minute, my foot is on fire."
"Can't you wait until we stop at the Wawa?"
"No."  I took my foot out and shook it and the heat dissipated from 5-alarm fire to merely smoldering.  We rode back to the Wawa, which was only a couple of miles from home, and again filled our bottles.  I drank 8 bottles on a 60 mile 3-hour ride.  Whoa.
So we made it, my pride was a little bruised, but Colin did say after we got cleaned up that today was probably the worst kind of ride I could have done for my third ride back in 2 months, and he knew I was still trashed from the weekend.  We went to the beach late, after the lifeguards had left, so we were able to swim out pretty far and it was challenging to swim back to shore with the hurricane coming. 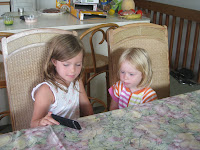 That night we cooked a vegetarian meal for Mom, Dad, Sab, Alessandra and Florie, all meat-eaters.  Fried Tofu with Peanut Sauce and Orange Glazed Tempeh over rice.  A nice salad, broccoli, and homemade gluten-free cream cheese brownies.  They were awesome, and we like our gluten. Sabrina loved everything, my mom was intrigued, and Dad was well, polite, for him, but did not eat much.  Oh well, we tried.
The next day Colin got up and did some work, and I was in a grumpy mood, so even though my legs needed a day off, I went running on the beach.  Jumped in the ocean afterwards but the undertow from Hurricane Earl was strong, so the lifeguards would not let me go out past where the waves were breaking, even though I asked them nicely.  Took a shower packed up the car and we catapulted back to Philly in the EX35.  It would have been nice to stay longer, but it was great to get out of town for a few days anyway.
I told Ian, who was watching the pups, that with the dog door left open all night (because no one was sleeping over) Madison would mostly likely kill an opossum to show her disdain for having been left for two days while I frolicked at the beach.  Sure enough, there was a kill for him to clean up.  At least she is predictible.  Next time Ian darling, put a lid on the trashcan so I don't have to deal with a thousand maggots.
I did have a dinner party on Friday night, but unfortunately Ian's car got plowed into by a young co-ed looking at her cell phone perhaps, and his knee was in bad shape.  Colin had to take him to the emergency room.  So it was more of a girls night in until the boys showed up later and ate and Ian doused his misery in sangria.


A few days later at a dinner at the home of Papa Sandberg, Ian was showing his lack of patience with being a patient.  Yeah, I've been there.  My advice is to enjoy to attention while you have it, because it does not last nearly as long as the pain.
posted by Unknown