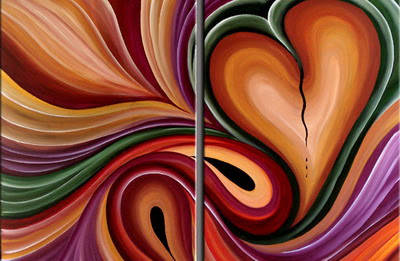 I have dabbled in the online dating thing for the past....ugh.....wow....6 years? Jeez. Most of that time I did not have a visible profile, but in between relationships I would put it back up for more disappointment and dead ends.  I guess my track record was not too terrible, as I ended up dating two men seriously who I met online,  nevermind that the first one pretty much single-handedly destroyed my happiness for a year but hey, I did allow him to do that didn't I?

In addition to those two I did end up going on a handful of first dates over those years but that's about it. I usually can weed'em out within a couple of emails or so.  Why online dating?  Well, I work in the construction industry first off, and for the past few years for very small companies so I really don't meet eligible bachelors at all.  I don't go out to bars very often, and I think that's a poor way to meet people anyway.  You would think being in a male-dominated sport I would meet plenty of men, and I do, but either they are too young and obsessed with the lifestyle, are not financially stable, or else just not very intellectually curious.  Of all athletes, cyclists have higher IQs I would say, but I still find most of the ones I meet that are not already married are not cerebral enough for me.  It seems I always have to choose between beauty, brains, and stability and I want'em all.  Hence my status....6 years later.

It's OK if you think I'm a loser, you smug married types, and maybe I am, but as you are going through your first divorce I know your pity will turn to envy, because I did not settle for that chubby, balding father of your children who thinks romance is about taking you out to dinner once a year on valentine's day.  Actually, I know there are a handful of you out there who are happily married and I do cherish you, because you give me hope that somewhere out there, there is someone that will contribute to my happiness. For more than a few weeks.

So, here I am, back giving it another try.  Boy there are a lot of losers out there.  Here is one gem I got this week on my favorite site.  Unlike match.com, fitness-singles prides itself on being for athletic types.  Here it is apparently more important to have visible abdominal muscles than it is to have a brain capable of intelligent thought, writing and speech (I would take 1 out of three at this point).

Because I don't get to these messages very often I tend to take several days, sometimes a week, to return these emails.  Certainly they almost never get returned in a few hours, unless it's a cyclist I know who recognizes me and is giving me crap for being back on the market. (While subtly acknowledging that the fact that they found me here means that they are back in the slaughterhouse as well)

So I get an email from, let's call him John Smith, because he gave me his complete name, home and cell numbers and *real* email address in his first message to me (misspellings, bad grammar are left here as they were written):


My name is John and I tend to be a combination of moderates.But my passions are skiing,backpacking,riding my bicycle. I also enjoy music,art,theater,exhibits,museums,culture,dance,festivals,water skiing,taking out my sail boat on a windy days,cooking,going out for dinner but I tend to be a discerning eater. That is not all there is to me. I consider myself to be an open book with pages yet to be written .People say I am very personable and fun to have around. I have been complimented on many occasions on how I tend to meld into my environment and the culture around me no matter were I am. I much prefer the mountains to the beach .I don't care much for television or watching sports on TV.One,frankly I feel TV is insulting.Two,I would much rather be out participating in life experiences. I own my own business . I really enjoy my work,but it is what I do,not who I am. I also have 2 sons that I love teaching them to get out and experience life. through time I have learned to accept your partner for who they are and in turn you will be rewarded with a true partner in a loving relationship. Anything more is inconsequential. my membership will expire soon and I would really like to get to know you better my cell is 609-xxx-xxxxwhich you can reach me during the day and my email is xxx@aol.com and my home # is 732-xxx-xxxx. heres wishing upon a star!

So that was on Monday night at 11:18pm, after I had turned off my phone. The next morning at 9:23 am I got this angry diatribe:

the email that which I sent you was merely a test, an experiment if you will. A test of depth of character,

Finding that the vast majority of the people on date sites have no intention of living up to whom they say they are, or even so much as common cutousy to respond to that person that tried to communicate with you in a nice way! finding that the vast majority have the depth of a computer screen and that's as far as they go. The most important way to find love is to first find a way to accept them as they are.If you are fixed only on the what you see as negative aspect of that person. Your heart will not be open and you will not be a loving person. They in turn feel criticized or rejected. If you focus on the healing behavior seeing the soul rather than the personality, the essence of being rather than the attitude, you will be able to find love and your partner will feel this as well and will feel honored. in turn he will choose to want to be the person you desire. I have dated a woman from this site that lives in Canada for the past 3 years and MANY of you are still here!   (this begs the question why he is on FS now?  How does he know many of us are *still here*?  What if we were in 3 year relationships as well and they ended miserably and we are back on here despite our best attempts?  Or...was he checking FS the entire time he was dating Ms. Canada?? hmmmm.....)


responding to This email (as opposed to his happy email above I guess he means) will only further prove my point. responding to the negative rather than the positive. self justification for the lack of even so much as common courtesy to the person that was just trying to communicate with you and be nice to you in the first place.


Try reading a book called The 5 love languages singles edition. It will help you find real love. Its there waiting for you all around you and not on some date site.

(Although I am trying to discern truth from the fragmented sentences of a budding sociopath, I have to say that it was brilliant of him to add this paragraph, because probably a third of the women are going to ignore John and thus show that they "have the depth of a computer screen " and the third will block him so he can't send any more stupid emails, and the other third might take the bait and respond to John.  No telling what might happen then.  If I were of that ilk, I might say something like:

Dear John, thank you for taking the time to email me.  I have to admit I was surprised to get 2 emails from you within 10 hours, one expressing your interest in meeting me, even giving me your personal information, and the other expressing outrage that I had not taken you up on your offer.  I did not even have to waste my time getting to know you, since you provided a wealth of information that indicated that your next date really should be with a psychiatrist, not to a mere Controller like me. But since you seem very concerned with my capacity to find real love and even recommended a book I could purchase towards that end, I thought I would return the favor and give you my tips for finding true happiness, as follows.  Please keep in mind that this is far from an all-inclusive list, and I reserve the right to add to it should you feel the need to respond to me further:


At the end of the day though John, I urge you to take my advice worth a grain of salt, since I, like you, are back here on FS drinking the Kool Aid.  Bottoms up!

Note that as of 10 pm this evening John had been removed from FS.  Here is what I read when I tried to click on his last email to me:

This member has been removed by Fitness Singles for violating the terms and conditions of the website. Please refrain from any additional contact with this member.

Scary, but I can't stop laughing.

I really enjoyed your blog post. I just started FirstDatePage.com and you have given me some ideas that I can use fix some of the issues that you mentioned.

I'm glad I could be of service. I have to admit I have looked at way too many profiles in my day :(

You should have just told him that you got all the information you needed from the New Jersey area code.

that's harsh. I was trying to go easy on him. I'm worried that if more people start reading this blog I won't ever be able to get a job or a date again.