So I left the story of Halloween unfinished.  So as you recall I was mountain biking all weekend....
I did manage to get home from State College, although I did fall asleep for 45 minutes in my car half an hour after I left Raystown Lake. I fed the dogs, unpacked, threw my dirty stuff in the wash and headed downtown. PBF was disappointed that I had missed the party that his street throws every year for the trick-or-treaters and their parents. By the time I arrived it was 8 pm and the kiddies were headed off to bed. His neighbors were relaxing in beach chairs on the cobblestone street and PBF introduced me, and that is when I noticed that he was very happy...and feeling no pain. He sure had a head start on me and I'm not much of a drinker, not since high school anyway. So we walked into his place, I threw down my duffel bag, greeted his two 8-lb excuses for dogs and and he poured me a glass of champagne. This was perhaps a good thing, because afterward I headed upstairs to change into my costume. I put it on, pulled up the fishnets and looked in the mirror, and ...had a full-on panic attack. Oh my God, you have got to be kidding me.  I picked this thing out??

I was freaking out because if I were home I could easily doctor up any costume with all the accessories and accoutrements I have there, but here I was marooned in the house of a man who had been a bachelor most of his life. I mean the kind of guy whose refrigerator has only condiments, beer, and a half-eaten Trader Joe's burrito in it. I realized there was a very slim chance he would have anything at his place that would render this very skimpy costume, which looked OK in the Masquerade dressing room, acceptable to me. Well acceptable to anyone that is, except maybe my "less is more" date.

I scrambled upstairs in my fishnets and bare feet, to where PBF was in his bedroom getting himself together.

"PBF!  PLEASE tell me you have a little pair of, um... Calvin Klein underwear

PBF saw that I was not playing and headed for the drawer where he keeps his drawers, and I thought to myself...cool....there is a chance that he will have a pair.  I might be safe.

He asked me to turn around. As if!

"I can't walk around like this. My ass is totally hanging out!" I exclaimed to his bemused smile. The skirt was really really short. Somehow these things never look that short on the skinny-legged models but when you put them on a pair of "athletic" thighs they look, well, inappropriate, as mom would say.

"Andrea”, he said, looking at my butt and then back at me again and taking my hands. “Listen to me, I'm going to be mad at you if you cover that up, you look great, it would not look right with shorts, and besides, everyone there will be wearing the same kind of thing."

"What if there are people you know there?  Do you really want to be seen with me looking like this? I mean this is Philadelphia, not Miami!”

"I won't know anyone there, " he said, "and besides, it's a costume party, you look fine."

Somehow this calmed me.


So we made it there. I checked my long coat, wincing a little as I took it off, and we were standing there in the lobby, gazing up at Henri David himself in the first of his 3 costumes.  Suddenly I look up and Governor Rendell, who I had known cordially when he was Mayor Rendell, walked over to us and said hello. Oh for Christ sake, I was standing there half-naked in front of the Governor of Pennsylvania. Now mind you this was a few days before the mid-term elections and the Democrats were scrambling to make as many appearances as they could. Who knew they would be at the Henri David ball? I smiled at Ed and said, "Good evening Governor, I have not spoken to you since we were on Stairmasters next to each other years ago at the Bellevue." The Sporting Club at the Bellevue that is, where I worked out for the year I worked in a law firm downtown when I moved back home from Boston.  Ages ago.


He looked me up and down with that quintessential Ed Rendell half smile on his face and said, "It's working for you..... I would like you to meet Dan Onorato," and he gestured to the man in a suit to his right. I said hello, but Dan would not look me in the eye for fear someone would snap a picture of him in front of a scantily clad nun impersonator. I mentioned that I would be voting for him on Tuesday and he said, "Thanks I appreciate that," his head still pointed down at the floor. Good thing no one important would be here like PBF had said!  Whew!  Where were the news cameras when you needed them?

PBF and I walked over to the bar to a drink, and of course there were 2 more people he knew there, and he introduced them to me. All of them, mind you, were wearing costumes that they could appropriately wear around children.

What was so fun about this party was that the modus operandi of the evening seemed to be to walk up to total strangers, admire their costumes, and ask to take their picture. I think all night maybe 25 people asked if they could take my picture, and about 25 more wanted to pose with me. Add those to the pictures I took of others and I ended up taking 100 photos that night. Not all of which, mind you, can be displayed but I will provide you with the link to most of them if you keep reading. Some shall remain on my computer never to be seen again. 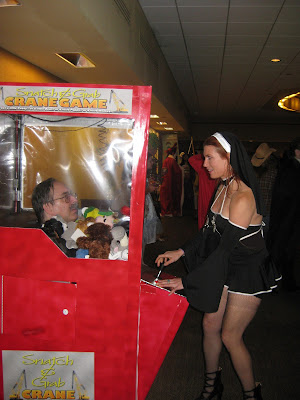 My favorite moment of the evening was when I came upon this incredible costume. This guy built this mock arcade game that actually worked, so I stood there and controlled the joystick under his directions (yes that's his head in the middle of the toys!) until the claw came down and nabbed me not one, but two stuffed things. He said no one had ever won 2 toys before. I knew I could win something this year.

Which brings me to the end of the evening, which is to say the evening ended abruptly. Since I had to schlep around these two stuffed animals, my camera and bag (the camera was in constant use) and my rum and coke, I finally decided that carrying around a drink was too cumbersome, and since I was dead sober and I thought I needed to be a little less reality-based to enjoy the festivities, I decided to find PBF so he could buy me a shot of tequila. Yes, we got separated when I needed to use the little girls room and he was talking to his friend. I figured we would find each other, but 20 minutes later as I was posing for picture after picture, I realized that I would probably never find him. And at that very moment, even though we were in a ballroom with about 1000 other costumed people, he walked past me as I was kneeling on the floor gathering up my stuffed animals.

I called to him, and we were reunited with much joyousness, and headed to the bar where the bartender poured us each about a half pint of Sauza each, I kid you not. So I drank it in a few installments, so did PBF, but later we figured out this is what put him over the edge. About 15 minutes later we were seated watching the judging and PBF informed me we needed to head home. Once there he barely made it to the bathroom to, as we used to say when I was in college, Kiss the Porcelain God.  I found it all a bit humorous, especially since he was flying out on Wednesday to do an Ironman in Florida. Ouch.

So we vowed to go again next year and actually get to dance this time. PBF swore to me that he has not gotten sick from drinking in years. I realized that I have not gotten sick from drinking since Senior Week in high school, but it was so awful I vowed never to go through that again.  And I have no doubt I ever will, because I like to think that for all my faults, I do learn from my (really bad) mistakes.  Not, it seems, when it comes to dating though.

The following are some more of my favs, and more here. 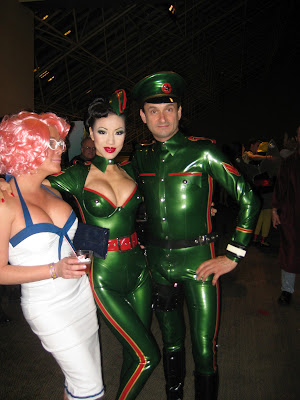 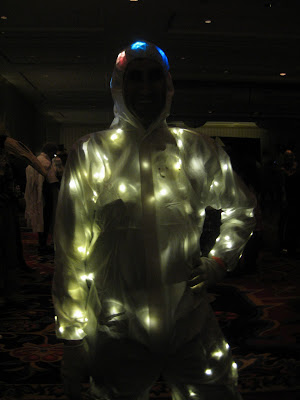 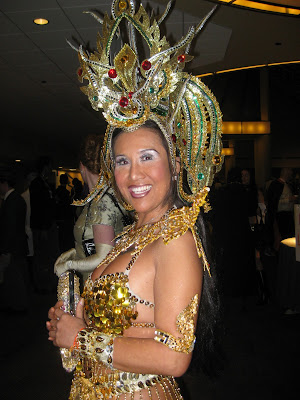 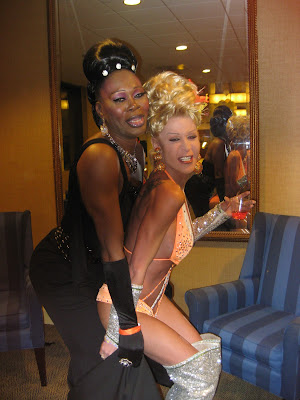 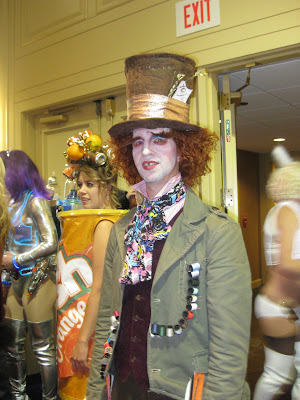 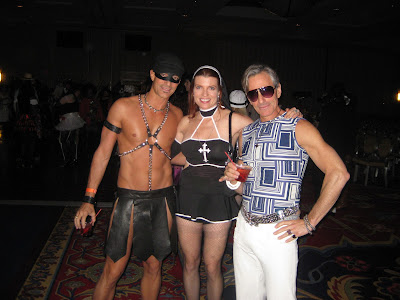 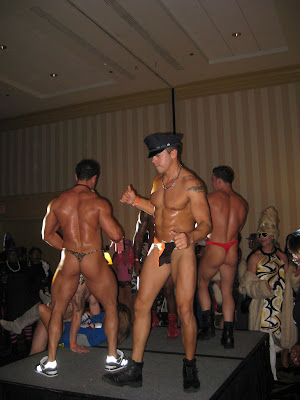