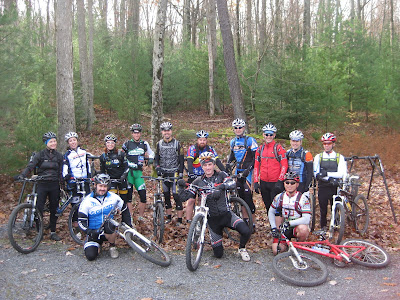 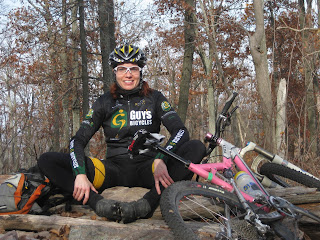 So this weekend as I said I headed up to State College for Mike’s camp previewing the TSE course. There were 10 of us, including Mike, 9 guys and me. Of course Thursday I worked, and Thursday night instead of packing I was writing because folks were giving me grief for not posting anything for two weeks, so I was supposed to leave at 11 on Friday am, instead it was almost 1 before I left Philadelphia. We were supposed to get there at 2 for a 3pm ride. Needless to say I missed the ride, because I ran into 40 minutes of traffic on the turnpike.  I’m talking miles and miles of cones funneling our confused vehicles into one lane so that 10 PennDot workers could fix a 10x10 area of asphalt, no joke. I was pissed. When I pulled up to the Eagle Lodge, base camp for the TSE, Zach Adams was about to go for a ride with his adorable pupply Lona, so I asked him to wait and I went out with him. We only did about 5 miles with the dog, it was getting late and we did run into the whole group and turned around and headed back with them. So I missed most of the new Prologue although I did ride the 2010 one last June, I know Mike changed it up though.


Friday night we went into town and ate dinner at Cosi Thai. It was pretty good, but the best part of the evening was standing outside in the cold for an hour afterwards trying to figure out what we felt like doing, while standing in front of Cosi Thai watching all of the college students walking by in their creative, funny or sexy costumes. My personal favorite was this one:
However since I was with 9 guys, their favorites tended to be more of the "sexy" variety.
This proved to be entertaining, and since most of the co-eds were already feeling no pain, I had no trouble walking up to them and asking if I could take their pictures. At one point Mike exclaimed that it was pathetic that we were standing on the corner looking at 18 year-old girls, after all, there was only 1 person in our group who could appropriately leer at 18 year-old girls, and that is Zach, because he's 20. For his part, Zach had asked one of the girls where "the party" was and she told him it was at "224". So we had to basically drag him back to the camp or else he would be knocking on that door.  At least he would not get carded there.  Poor fool.  Sucks to be young. 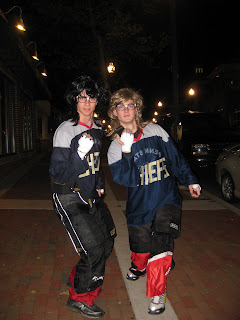 Anyway, back to the riding. Saturday started with a big breakfast of pumpkin-ginger-ricotta pancakes, multigrain toast, and scrambled eggs with portabella mushrooms, spinach and jack cheese made by yours truly. We knew we were going to be out all day previewing day 6, so we packed a ton of food and drink. I packed 2 Nutella sandwiches, about 6 coconut macaroons, 3 Pro Bars (delicious, palatable, and 500 calories each), gel blocks, a bottle of double strength sustained energy

with added agave nectar, and a gel flask filled with hammergel

. I ate everything except the hammergel and one pro bar, and that’s only because I forgot it was there. I'm really working on the nutrition angle, although it is much easier to get it down when you are stopping for 5-10 minutes every so often to refuel.

We met up with National Ultra Endurance Series Champion Jeff Schalk and his wife Anna Kelso and their friend Tracey Brauksieck for the first part of the ride. I reminded Jeff how I had enthralled he and Nick Waite with graphic depictions of my gyno's attempt to turn my perineal nodular induration into a pincushion after the 101.  At that point as we were all in the middle of a 3-mile climb Mike told me to tell Jeff and Anna about all the crazy health problems I had survived in 2008-2009.  I resisted but it was a long climb after all.  After hearing about the collarbone break, the heart arrythymia, the heart surgeries, shoulder surgery, getting hit by a truck, and 2 more surgeries, the perineal nodular induration, yada yada yada.....Jeff said it made him uncomfortable to be riding next to me.  Jeff, Anna and Tracey cut out early, but we rode for 6 and a half hours, 50 miles, and in the first 26 miles we climbed 3600 feet. Total elevation gain for the day was 5718 feet. Ouch. Of course the trails were sublime, there were a ton of leaves on the rocks which made it much more challenging to choose a line, so most of the time you just hoped for the best. I was sporting a new saddle from John Cobb and wanted so badly for it to work out. The saddle was too far forward, and threw me off on the bike until we adjusted it after the Wildcat trail, which is an incredibly rocky 700 foot steep descent that has been used as a DH course in the past.  In order to descend this bitch of a trail without endoing I had to have my entire body over my back wheel with my stomach or even chest on the saddle. The problem was with the bike setup as it was I could not get back onto the saddle from this position, so I ended up walking a good portion of the trail which really pissed me off all day.  We made the saddle adjustment on the trail, now I am dying to get back there to do it again, maybe when the leaves have blown off it. One of the scariest trails I’ve ever ridden.

Saturday night we watched the Penn State Michigan game and I was bored to tears, but we did meet up with Jeff, Anna and friends again. Since they carded a few of us (I was NOT one of the lucky ones for some reason) Zach, beerless, sat there falling asleep against the brick wall until Jonesy took pity on him and took him back to the cabin.  Apparently Oct 31st was the last night of Jeff's off-season so he was living it up while he could.  I'm pretty sure that't the last day of my off-season too, but I'm not really sure, I have to ask Colin. 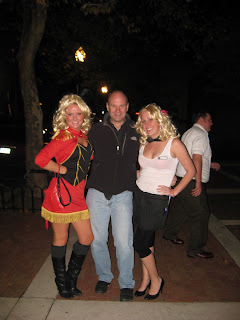 Sunday I got up early so I could make breakfast and we could get packed up and head out to Raystown Lake for a shorter ride before I had to head back to civilization and the Henri David ball. I’ve written about Raystown before, it's insane pump track riding, but it really kicks you in the ass. We only rode 2 hours there, and my legs were smoked. I did ok for the first 45 minutes, but afterwards I was so cooked I could not wait to get out of the woods. The short bursts of high cadence spinning you have to do to attack the little hills really tires you out, and of course we all were hurting from Saturday anyway.


So I said goodby to my compatriots and pushed the "home" button on my GPS, but now I was another hour NW of state college, so it should have taken me 4 hours to get home. Yikes, it was 12:30! I started driving, and after 20 minutes I could not stay awake. I was pinching my cheeks and slapping my face, singing, yelling, but finally I pulled over for a 5 minute nap and passed out for 45 minutes. After that I was fine though, and made it the 200 miles back in 3 hours. Just in time to throw my dirty laundry in the washer, walk the dogs, pack my bag and f^$k me pumps with costume and head down to Society Hill to meet PBF for some more fun. Whew!

more pics here from my lame camera.  For incredible pics from photographer extraordinaire Abe Landes  who was riding with us this weekend on a freakin' singlespeed (I am such a whiner!), click here.
posted by Unknown