a stranger in the house?

Last night I got a chance to catch up with an old friend, Joe Kavanagh, who went to Boston College with me back in the day.  We talked about the new start-ups he is currently absorbed with, my disgust with my lack of a career, traveling, relationships, and his desire to have children before he gets much older.
His voice was half serious, half bemused as he said quietly,  "It is, after all, the reason we are here andrea, no?"

In years past, I might have protested this foolish utterance as the mark of a person who had exhausted his usefulness on the planet and was now looking for a raison d'etre, as it were, but this time, I stopped folding my socks for a minute and pondered his statement.

"well...maybe.....I've been thinking lately that I want kids myself."

"whoa....what did I just hear...not andrea walheim?  Did you just say...hold the phone!"
I laughed and told him to shut up and yes, I was actually thinking that I might want to have a kid.  Another discussion about parenting later in life ensued, and finally that topic ended with me saying something along the lines of  "The question is not whether or not I would be a good mother, it's more about whether or not I meet someone I want to make a baby with.  Anyone who sees the attention I lavish on my dogs would guess I would be a good mama."

So this morning I came down the stairs in my pajamas to make my tea and breakfast and the house was freezing.  I mean, yeah it was 12 degrees out, but by 7 am the temperature should have been 68 down there.  It was warm and toasty upstairs, mind you, so I knew my heater was working.  I walked a few more steps towards the kitchen and this is what I saw. The door to the backyard was wide open, and it was about 45 degrees in the kitchen.

I was horrified.  I knew I had not left the door open, in fact I had locked it and closed the dog door before I went upstairs as I always do.  Someone or something must have opened the door.  I felt that sinking feeling in my stomach that I felt when back in college I came home to find that someone had broken into my apartment.  But this was worse, since I had been sleeping upstairs.  The first thing I did was walk over to the breakfront where I had left $60 in cash for the housekeeper who was coming tomorrow.  I figured the first thing an intruder would grab was that.  It was untouched. 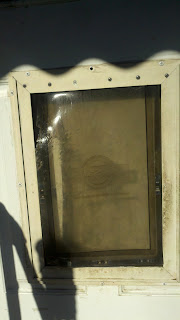 It had snowed last night, and there were no footprints in the snow.  By this time the dogs had come down the stairs, and you can bet that if some stranger had been in the house their noses would be on the floor.  Nothing.  This did not make sense.  I went to slide up the metal plate that closes the dog door and it would not budge.  The locking pin was stuck in the up position, as though someone tried  to force it upwards with the pin in place. From the outside.  Now I was really creeped out.

I opened the door and examined the vinyl flaps from the outside.  They were all chewed up on either side, so obviously this was done by an animal trying to get in. That I could deal with.  My next door neighbor with the cats told me that she has had issues over the years with opossum climbing through her cat door to get at her stash of cat food.  They come in my yard as well to eat from my compost pile, but the only ones that actually make it into my house are the ones Madison brings in herself.  Thank goodness that phase is over.  Now she just kills them in the yard.  No self-repecting prey animal would enter 3434 voluntarily, would it?

On closer inspection, the chew marks on the door were not tiny, sharp bite marks of an opossum, a squirrel, or a raccoon. They were the teeth of a larger mammal, one strong enough to have partially shoved up that piece of metal....

I stepped back from the door and let Madison out for her morning pee and survey of the perimeter of the kingdom.  Her paws made fresh tracks in the snow and she did not once sniff the ground.  If an animal had been in my house she would be running around madly tracking the scent.  No, there had not been a strange animal or a person here last night.  This damage had been done by one of my own.

I recalled how last night as I was reading under the covers, Madison was already sleeping in her perch on the edge of the bed.  I called to Chloe, and oddly she did not come, but I figured she was sleeping downstairs, which she often does for part of the night.  So I fell asleep.  But no, I had locked her out.  Nice.  She must have been out there raiding the compost pile and lost track of time.  But why did Madison not wake me up?  She knows how to get me out of a dead sleep just by prancing a certain way on the wooden boards.  Worst case scenario she jumps up on the bed and paws my head.

I finally pieced together the rest of the puzzle.  Madison had fallen asleep as I did, but Chloe was outside chewing the hell out of that 1/2 inch piece of vinyl and clawing at the metal door with her poor little paws in an attempt to get in.  When her sister sensed that something was wrong she went downstairs and saw that her twin was out there.  Instead of going back upstairs and waking me up, Madison deftly pushed the lock to the left to unlock the door, and then pulled at the lever so the door swung open and  both of them bounded up stairs, triumphant, leaving the door wide open for me to find in the am.  I would not be surprised if there were not much trial and error involved either.  That dog is scary smart.

I checked Chloe's gums and paws for signs of cuts or lacerations, nothing, but we are talking about a dog who steals  an empty can of tuna or pumpkin from the recyling bin and then chews it until there a large puncture holes all over it, all without one cut on her gums.

I lavished kisses all over her afterwards and she was quite pleased by the attention, but really had no memory of the ordeal that had precipitated this shower of praise.

Yeah, I know.  Perhaps I should stick with dogs.