the Kroc Center comes to Philadelphia 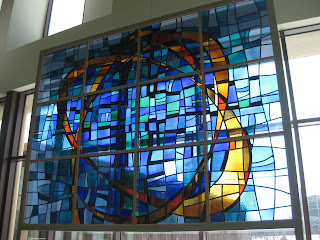 A week ago Monday I got back from a long walk with Madison and Chloe, and although I live in Philadelphia and it was only 9:15pm when we left, my 'hood was a ghost town.  They were calling for a storm over the next couple of days, a mix of sleet, snow, and rain, which I guess some call a "weather event" and more specifically a "wintery mix." I had thought about stopping at Whole Foods to pick up some milk for the kefir, since my raw milk delivery got postponed due to the weather, but as I got within a block of it there was a line of cars down the whole block just trying to get into the parking lot.  No thanks.  I don't care how many express lanes there are in that place, that is a hour-sucking quagmire. So I went home, made supper and took the dogs out.  As I said, East Falls was quiet.  Everyone was bracing for the storm.

This winter is shaping up to be like last year, very cold and very wet.  Actually we are fortunate in Philadelphia to be able to ride outside year-round with some motivation and the right gear.  But this winter is similar to last in that it is so cold and wet, (read = snow) many have been climbing up the walls and bitching non-stop on FB about being sick of indoor interval workouts, etc.

As for me, I'm outside pretty much as about as often as ever.   I need to be outside in order to remain sane when the days get shorter.  There is a name for that, Seasonal Affective Disorder, but I need another "syndrome" like I need another implanted medical device.  I used to have a lightbox, but once I became a serious cyclist and rode outside all year I did not need it anymore.  Even if I can't ride outside, I still hike with the dogs in the woods or walk them through my neighborhood upwards of five hours a week.

I feel very fortunate that I am a mountain biker and can still ride outdoors in all kinds of crazy weather, in fact snow riding is my absolute favorite.  I am surprised how many of my teammates and friends will NOT ride when there is snow and ice out.  I completely understand that caution out on the road, with  pissed off drivers stuck behind you on shoulderless roads marred with cinders, broken glass and black ice, not to mention nasty wind chills in the single digits, but in the woods the snow turns our bikes into skis (with brakes, a huge technological advance), the wind chill is much less biting and my perception of the snow as "fluffy" renders me fearless.  And as far as I am concerned safe enough if you are one who does not let less than optimal conditions phase you.   I learned a long time ago a small change of attitude can make turn a mediocre ride into an epic one, and as Andy used to say when I complained about my performance or shitty weather, "andrea, even a crappy ride is better than no ride at all."

So before I bask in my newfound pollyanna-ism, I have to remind myself that Colin canceled the Cadence Class for 2 days this week due to the weather, and with all of the rain and ice that pounded the trails my Thursday night ride was canceled like last week.  So what's a girl to do?

Cross train of course.  There is weight training, plyometrics, running, swimming, hiking with hounds and of course how about how every year we learn what a strenous workout shoveling a foot of snow can become?  And even though we are supposed to be putting in those base miles right now (in years past I would be riding 8-10 hours a weekend, mostly on the road this timeof year) sometimes you just have to be creative.  I do ride indoors, for as long as 3 hours at a time, and I do ride outdoors as much as just about anyone, but yesterday I gave myself an early birthday present....I joined a new "fitness center." 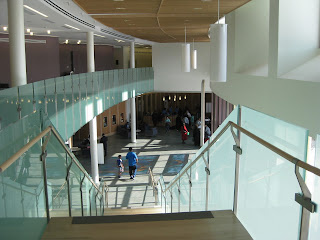 The Salvation Army Ray and Joan Kroc Corps Community Center is named for McDonalds founder Ray Kroc, whose widow Joan left half a billion of her estate to fund centers all over the United States in underserved neighborhoods.  The one in Philadelphia has been in the works for a couple of years; I found out about it when Liberty Flooring won the bid to install the floors in the 130 million dollar facility for T.N. Ward Company, the General Contractor hired by the Salvation Army.  The place is about  a mile from my house as the crow flies.   I looked at the plans and knew the place was going to be incredible, and as it was the same price as East Falls Fitness but offered so much more, I decided I needed to join.  I had won a free 3-month membership to EFF when I did their running race and won, so I waited the 3 months from the opening in October.

Here is some info from the Kroc Center page on the Salvation Army website worth reading:


The Salvation Army Kroc Center of Philadelphia is the newest, largest, most comprehensive community center on the east coast and represents The Salvation Army’s ongoing commitment to building communities of faith, hope, compassion, and grace.
The project is the single largest investment in human services in the region, with an investment exceeding $130 million dollars. Designed by MGA Partners Architects, in association with PZS Architects and landscape architects Andropogon Associates, and built by T.N. Ward Company, the 130,000-square foot super community center is situated on 12.4 acres located at the junction of several of North Philadelphia’s most troubled neighborhoods. The center will double the amount of services that The Salvation Army currently provides in Greater Philadelphia and will house an array of programs designed to address the economic, educational, health, recreational and spiritual needs of the communities it will serve.

The programs, as well as the building itself, have been designed to stimulate the mind, body and spirit, to provide hope, and to transform the life of each and every member of the community.

Joan Kroc, wife of McDonald’s founder Ray Kroc, had a clear vision in mind: build state-of-the-art recreational and arts facilities in underserved communities throughout the nation to ensure that all individuals have equal opportunities to grow their natural gifts and talents. In 2003, Mrs. Kroc bequeathed to The Salvation Army the largest gift ever given to a private charity with the express purpose of building and endowing Salvation Army Kroc Centers. The Salvation Army Kroc Center of Philadelphia is a fulfillment of her vision and provides an unprecedented opportunity for you to do the most good for yourself, your family and your community.

If you want to learn more there is a lot of information in this arcticle from Newsworks, so I don't need to repeat it here, but take my word for it the center is absolutely stunning.  The community center includes a chapel with religious worship in keeping with the mission of the Salvation Army, an indoor waterpark for the kids separated from the lap pool by a wall (nice! no screaming kids while I'm swimming) , a 2-floor fitness facility equipped with  free weights, plate-loaded and weight stack machines and more cardio pieces than I have ever seen in any gym, classrooms with fully wired computers, a dance studio, tons of group classes including ballet, yoga, nutrition, and more, a double basketball court, a cafe open to the public, a professional grade turf soccer field, and a fireplace in the main lobby. 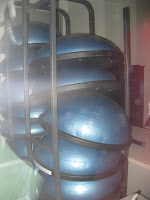 The building was designed to allow the sun to do most of the illumination through the fitness center which really lifts the spirit.  Sadly, I'm only in the gym 2 days a week now doing a full-body circuit, but I really would love to sneak a weekly swim in there somehow.  I have completed two workouts there so far and I am pleased to report that there are plenty of medicine balls, BOSUs, high quality yoga mats and Physio balls.  It was not crowded either time I was in there in the am.  I hope it stays that way.

I have discovered some drawbacks, but they are pretty minor: 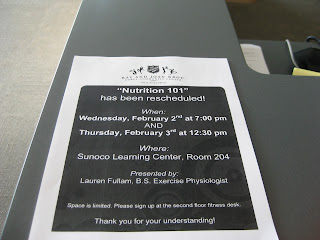 I am sure I (I know, shocker) will find some other minor little details that could be improved but everyone is so darn friendly and helpful there that I am sure some of them can be addressed.  Anyway, enjoy the photos and if you are interested in joining or need directions the SA page can be found here. They are waiving the enrollment fee until February 13th.

I like your post. I just joined too. It is a great center but there could be improvements. Good luck!

They are definitely working out the kinks, they already improved the cafe menu I noticed yesterday. I hope to see you there sometime. A