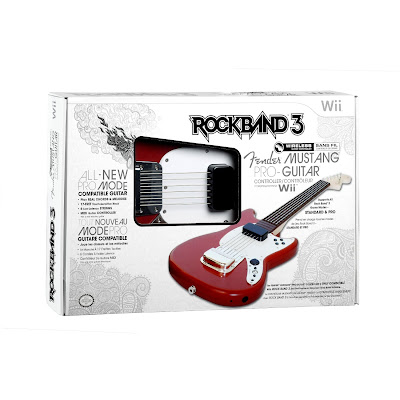 He might even get it too, but not likely from me.  I'm not a big advocate of video games.  I'm more of a Buy-an-Actual-Guitar-and-Learn-to-Play-for-Real type.  I have been known to Karaoke though, the kind you do in a bar in front of 100 people.  But I used my real voice for that.
Speaking of the Amazon Wish List--they are amazing!  I wish all of my friends and family would make one.  You can put items on there that Amazon does not even sell (from any website) and keep a running tally of stuff you want; and of course that can run the gamut from packets of seeds to dishwashers; the sky is the limit on the web these days.  You can even keep a Secret Wish List for your eyes or your lovers' eyes' only, you know with this kind of stuff on it....yes that was the proper placement of those apostrophes' for some of you.  One can also search with just a name for anyone's Wish List so you can see just what your frenemies are coveting these days.  Shop on!
posted by Unknown 2 comments:

on the hazards of not racing and the closing of doors 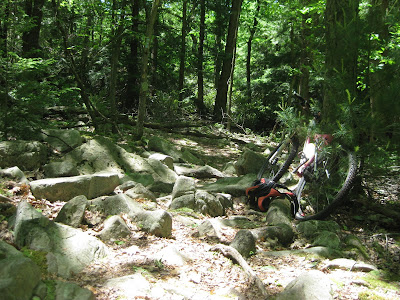 So last week was crazy.  And I only actually worked one day. It would have been nuts anyway but then Janel invited me to accompany her as she was headed out to State College to help Ray and Nancy Adams and Mike Kuhn and crew with the final 2 days of the Trans-Sylvania Epic.  I had to switch the closing on the refinance of 3434 (which was scheduled for Friday) to an online closing from the traditional ones where you sit down with the agents and sign a stack of papers that hopefully you have actually read.  I was initially suspicious of this "online" option which required that I sign a Power of Attorney over to a total stranger so they could sign the papers in my absence after I approved them online, but if doing this meant I could ride my mountain bike for 2 days in State College and still get my mortgage rate lowered to 3.5%; well, I had overcome my apprehension even before I hung up the phone with Janel, who had, after all, invited to drive me up there.  Considering I am 2800 miles over my lease on the Infiniti in year 1; well let's just say it was an offer I could not refuse.
So my week went something like this: Monday of course was Memorial Day, and Meisha, Derek, Douglas and I drove down to White Clay for 3 hours of fantastic riding in the brutal heat.  When I got home I was feeling almost like my normal energetic self (rare these days) and I did more gardening until 7pm, which meant I was outside in the humidity for 12 hours, so I was good and tired.  The kind of good and tired you earn from a morning of  mountainbiking and then hours shoveling, planting, pruning, hauling, and weeding. The kind of work that makes you feel like you are part of the earth and are deserving of the space you are taking up on it.
Tuesday morning I had my deposition for the accident in July 2009 when a driver blew a stop sign and ran over my leg.  Twice.  Forwards and backwards. I took the day off from work for that, but we finished earlier than expected, so I went to Whole Foods, then home to unload, then off to Holod's to buy more flowers for my garden, then home to drop off the flowers and back out to the Wissihickon Park to run with Madison for an hour.  Poor Chloe had to stay home with a hurt paw.  It was in the mid-nineties and humid as hell, as Philly was having its first heat wave which proved once again that Spring is too fleeting here in Southeastern Pennsylvania.  It also means bolting arugula, flies and mosquitoes, and the race for that first zucchini.  After the run, Mad and I went into the creek to cool off. I slipped off my running shoes while she took gulps of water and laid her belly down in the shallow water.   It felt so familiar to gingerly step out onto those slippery rocks with my tender pale feet, just like I did  as I kid growing up with Little Darby creek in my backyard. 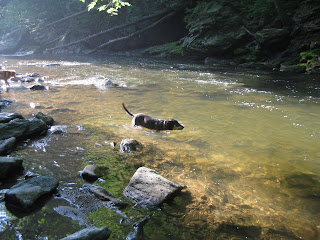 the whole time, but I did get a chance to take some vids of the 3 lap beer race around the lake.  During which I got pelted in the head with a beercan, but beyond that managed to remain unscathed.  It's not that I did not want to partake in the fun, it's just that I've been staying away from alcohol since I've not experienced optimum vitality in awhile.  Adding more toxins to my load would just make it worse. And I guess I was in an introspective mood and not really anxious to compromise my cognitive functioning, which has been sluggish lately through all of this.
Janel and I finally said our goodbyes and left for home around 6:30.  We made good time back to Philly; it helped that Janel had her lead foot on the accelerator of her Suby WRX.  Madison and Chloe were very happy to see mom return.  I had a blast, but the trip engendered a tinge of sadness which was not completely surprising.  I guess I felt a bit like an outsider, even though I saw many friends; not really a mountain bike racer anymore.  Transitions can be hard.  It's a lesson everyone learns and relearns many times in life.
My instincts are telling me I need to close the door on this phase of my life in order for the door to the next to appear.  I can make out vague outlines of this new path, but I can't see it clearly or grasp it yet.  It's a leap of faith, because you can't really see the new door until you have let go of the last, but I know it's there; beckoning me with possibilities, waiting patiently for me to let that old door squeak to a close behind me.
posted by Unknown No comments:

The richness of the present-moment experience is the richness of life itself. Too often we let our thinking and our beliefs about what we "know" prevent us from seeing things as they really are. We tend to take the ordinary for granted and fail to grasp the extraordinariness of the ordinary. To see the richness of the present moment, we need to cultivate what has been called "beginner's mind," a mind that is willing to see everything as if for the first time.
You might try to cultivate your own beginner's mind in your daily life as an experiment.
- Jon Kabat-Zinn, Ph.D.
posted by Unknown No comments: