on second thought, I much prefer my injuries to be self-inflicted

this independence day, I am reminded that sometimes it's OK to depend on others

Sunday morning of July 4th weekend I had a great ride with Janel and the boys from Lancaster in the Wissahickon.  We were descending the fast gravel downhill coming off the pipeline trail towards the Inn when, well,  I don't know what happened, but my front wheel washed out on the rain-thirsty gravel descent and I took a hard spill.  Landed on my head, smashed my helmet, and rolled for God knows how many times.  You sort of lose track of the whole dance when you hit the ground at 30 miles an hour and your body tumbles like a set of dice.  There was a lot of blood from the head gash, so Janel and Myron insisted that they drive me to the ER.  I was covered with sweat, dirt and blood and all I wanted was a shower but there were 5 of them and only one of me in a considerably weakened and confused state so I was quite easily overruled.

So now it's a few days later and I've been hobbling around with a sprained ankle, 2 staples in my skull, 2 badly bruised ribs, multiple lacerations and a hip christened with trail rash.  I am supposed to breathe into a spirometer 10 times an hour to coax my lungs to inflate so I don't get pneumonia.  The ribs are the worst item right now, as I can't really carry anything and I have great  difficulty getting myself up and out of bed.  Sneezing is the cruelest joke ever, bar none.  They did do a CATscan of my head and did not find a major concussion, although they did find some "neurological abnormalities" which I won't get into right here.  I didn't even bat an eye when that showed up on the report, I mean tell me something I don't know. 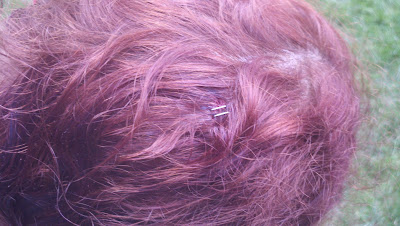 They did use this little disposable staple-gun to fasten together the hole in my skull, and Janel tried to get a video of it, but the P.A. in the Lankanau ER on Sunday July 3rd, 2011 was not in a good mood and she told Janel it was messing with her concentration.  Give me a break, you just aim and shoot, how can you screw that up?


All told, I will need a new helmet, having broken my beloved LAS Squalo in 3 places; a derailleur hanger and some cable and housing;  I'm out the $100 ER co-pay, and I'm not exercising for the foreseeable future.  Probably until Friday, when I will have a brave friend yank these staples out of my head in lieu of paying a physician to do it so I can go swimming at the Kroc Center.  I'm hoping my ribs and I can reach some sort of understanding and the water bouyancy argument will bolster my case for being able to resume some activity.  We shall see.

In the meantime, I am grateful to Janel for hanging out with me in the ER, for Tim for driving me and the Yeti home, for Chris for bringing me sushi in my hour of..well, hunger, and for Colin for helping me do a bunch of things around here that would otherwise be impossible in my impaired condition and reminding me that he can't read my mind and he would prefer if I could ask for help when I need it.  That's a tough one for me. True friends reveal themselves when you really need them, which is a welcome phenomenon in times like these.  Because it does seem that I have more than my share of times like these, doesn't it?