the aftermath of Irene

Irene was downgraded to a tropical storm and so the winds did not get quite as bad as forecasted.  This turned out to be a good thing, since at 3434 did not lose power at all. However, there are 29,000 Philadelphians who did lose power today so I guess I should not be too quick to dismiss this storm less I offend those who may  be eating canned chili for dinner tonight via flashlight. 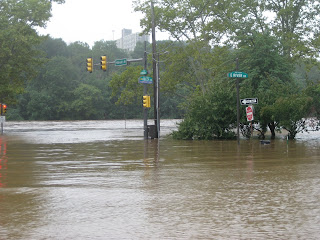 Manayunk and East Falls were flooded as usual.  Madison, Chloe and I walked down to the river to see how bad it was.  These pictures were taken shortly after noon today.  Apparently the river crested at 8pm this evening but I did not go back down there to check it out.

I did go to the Wiss to do an hour run and check out the trails, and I was relieved to see that the damage was not too bad on the Henry Avenue side, certainly nothing like Floyd, when several bridges were washed away and there was extensive trail damage.  I think that is partly because we have had so much rain that a lot of the dead branches were already off the trees.  Saturday morning I came upon three trees down, and that was before Irene moved in.  There was a lot of tree debris on the trails today, but they did not seem any more rutted and washed out than they did Saturday morning.

As I was turning up a trail I heard the sound of a chainsaw, and a minute later I came upon Tom Coyle and his friends from the PMBA. They had cabin fever, they told me, so they came to the park to cut out some downed trees.  How cool is that that the winds from Irene had hardly died down and they were out there doing trail work?  If you appreciate this, think about making a tax-deductible donation to help the park here.

Here are some more pics of our raging Schuylkill.  The good news is this evening was beautiful as Irene scooted up the coast, and it's going to be sunny and in the 70s and low 80s all week.  I have Annie's visit to look forward to and a 4-day weekend for Labor Day, hooray.