one dog down, one to go 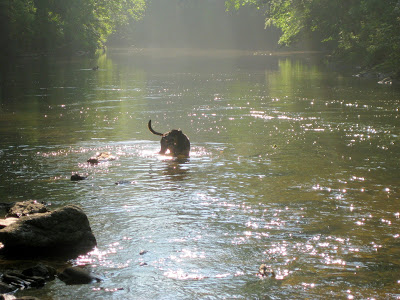 So I started writing this post several weeks back, July 4th weekend actually, and here we are at the beginning of August.  The days have been getting surreptitiously shorter as the summer tumbles headlong towards the end of the year; so you hardly notice until someone asks you what you are doing for Labor Day weekend.  The inevitable pull of gravity draws the water in my Wissahickon creek over the rocks and down the banks to the Schuylkill river, and then onto the Delaware River which, for thousands of years, has emptied into the Delaware Bay, and then into the great Atlantic Ocean where the Coriolis effect draws those molecules of water that flowed between my toes in the creek to far away lands and back up into the atmosphere and down again, and like the passage of time, there is nothing I can do to slow it down; I can only bear witness to its passing.  I suppose that is one of the reasons I write these thoughts down. You can't stop time any more than you can stop that precious water as it slips through your toes and over the rocks and away.

My garden has been yielding its abundance, and I've started some new projects around the house, most chore-like, others with an artistic flair.  This month marks the year anniversary of Gryphon's passing, and we all still miss him a lot.  If something positive can come from losing a member of your family, it is that the surviving members get more exercise now since I am no longer the caregiver to an elderly dog.  We take brisk hour walks around East Falls or Fairmount Park every morning and in this heat they often end with a dip in the fountain at Philadelphia University or else a stroll in the Wissahickon Creek.

So Madison and Chloe are littermates, now 9 years old, and they had never actually learned to swim.  No, you don't need to give a dog swimming lessons like you do to a child; dogs have an innate ability to paddle, but many of them did not receive the memo about this and thus have a hard time taking that leap of faith when the water gets much past their chests.  This was the case with my two kids, and as I mentioned before, I was determined to change that.

So the day before my fateful accident, I had Madison alone in the park since I was running and Chloe is injured and can't be off-leash for a few weeks.  The three of us had already done an hour walk in the morning, but I took Madison out again so I could run with my Ipod on and not worry about some creep trying to attack me in broad daylight.  Not to mention it's just more fun to run with a well-behaved dog, especially one in as great a shape as Madison.  It was 95 degrees and humid, so after we stopped I took her down to our special spot in the creek.  As soon as I unleashed her at the opening in the fence bordering Forbidden Drive that led down to dog beach, as I call it, she raced down to the water and immediately laid down and started taking gulps of water.  I made my clumsy 2-legged pedestrian way down the roots and rocks to the water, took off my shoes and socks, lay my Ipod, headphones, and sunglasses down and waded into the creek, wincing a bit as the rocks tested my tender feet.  Soon I was in above my waist, calling Madison towards me. The water felt so good after my run.

Madison came towards me until the water was up to her chest.  We had been here before, but this time I was determined to teach her to paddle.  I coaxed her towards me and tried gently to support her body and guide her into the deeper water but she was not having this and backed away from me as soon as I slipped my arms around her. So I swam out into deep water, laying on my back and feeling the cool water wash my sweat away and Madison never took her eyes off me.  I was swimming away,  calling her, and she was barking loudly in frustration that she could not reach me.

To my right a Causcasian Earth Mother of woman in a sundress that looked like it had been on many a dog hike was standing next to an African American man with a beard. They were chatting and throwing a ball into the water for two dogs who were avid swimmers.  I asked them if they would mind if we came over there, because I wanted Madison to see their two dogs gliding effortlessly across the creek and scrambling up on the opposite bank in the spirit of freedom and exploration.

"Oh sure, dogs do learn from each other" she said, and that is how I struck up a conversation with Kathy and Karl.  Madison stared in awe at the Lagotto Romagnolo, or Italian water dog, as well as at Rose, the lab mix, and in that moment I knew her competitive spirit would take over and she would get it.   This is the dog who as a puppy could jump a 7-foot fence, who can catch and  kill all manner of animals, even birds, and who is an incredibly powerful, cunning, and graceful athlete.  She figures out how to open doors.  She is smart as a whip and a little manipulative too.  She sometimes frustrates me, but I realize that if I were a dog, I would be just like her.
By this time we had an audience.  As you can see from the above picture, as we were down in the swimming hole, Forbidden Drive, with it's throngs of Philadelphians walking, jogging or riding by, was directly above us.  It was almost as if we were on a stage and were people stopping to look down on us and check out what all the commotion was about.  I found myself in the odd situation of calling out from the water, explaining to strangers that although my dog was nine years old I had rescued her from a garbage dump in North Philly and she had never learned how to swim.  This amused dog owners and non-dog owners alike.  There were probably anywhere from 4 to 10 people at any given time who paused from their stroll to rest on the fence in the heat, watching the spectacle.


So I went about my own swim, paddling on my back while I spoke with my two newfound friends about the dogs they had owned over the years.  I discovered  Karl was another client of my dog chiropractor, Dr. Fries, and I told them the story of Gryphon and of rescuing Madison and Chloe and the rest of the litter.  Suddenly Kathy's eyes got wide and she had a big smile on her face.  Madison, who had been barking pitiously to get my attention during that whole time that I was ignoring her, suddenly was doggie paddling over to me in the deep water.

"That's it Madison!  Good girl Madison!"  the three of us shrieked at the same time, causing the picnickers on the other end of dog beach to look over at us.  People on the fence were clapping, shouting, laughing and offering their encouragement.  Madison had the sloppiest dog paddle going; she made big splashes as she struck the water, rather than pushing it, and it was really funny to watch.  This was a mutt from North Philly, she was no Italian water dog!  She swam right up to me as I lavished priase on her, and I soon discovered that because she could not stop paddling, her nails left big welts which over the next 24 hours would develop into long thin bruises down my arms and back. I was afraid that she would get tired, and she was headed over into the current a bit, so I started to grab her to point her in the direction of the bank and Kathy interjected, "no just leave her alone, she'll be fine."

And Kathy was right.  She also told me in a couple more tries Madison's "stroke" would become more efficient and graceful, which was what I was hoping for.

It was getting late, and Kathy and Karl said goodbye and I thanked them and told them I hoped to see them again.  And with that, I slipped my sneaks back on, gathered up my things and Madison and I strode back onto the trail, both dripping wet, headed up to Hermit Lane where the car was waiting to drive us the 2 miles back to the house, where Chloe would be anxious to join us for dinner.  What an incredible day!  I can't believe how proud I am of my dog, I mean you would have thought my kid had just won the Nobel Prize for discovering the cure for cancer.  But no, she had just proved, once again, that you CAN teach an old dog new tricks.