water fast day one: attack of the hornets

So today was sort of what I expected.  But then I've had enough surgery in the past few years which  required I fast from midnight the night before until mid-afternoon the day of surgery so I was expecting the grumbling stomach, mental fogginess, and lack of energy.  Around 9 am I drove the dogs to Wises Mill Road so we could take different trails than our usual jaunt from Hermit Lane, since I was not riding and had all the time in the world.  Besides if I took that trail they would jump in the water and I thought it would be better if they did not swim in the Wissahickon Creek yet since the fecal coliform count would still be high from Irene and Lee., never mind that we all did last weekend not knowing any better. We hiked the Orange Trail to Devil's Pool, and of course there was trash everywhere from the scumbags who party there and don't give a damn about anyone else who might want to enjoy it's beauty.  These are the same losers who feel the need to spray paint the boulders there.  As we were leaving the FOW was removing spray paint with some sort of solution.  Thank goodness for people who care.

So I climbed on the rocks and picked up the trash, bottles, and articles of clothing left behind by people who should never had been born. Yes this took some energy, but don't forget I did eat last night so I still had a liver and muscles full of glycogen.  A friend took me to a gallery opening and dinner at FARMiCia so we managed to top off those stores nicely.  And hiking made me forget about my gnawing stomach.  The dogs were ecstatic running all over the "new" trail, and we ended up hiking off- trail part of the time.  Madison and Chloe got to chase chipmunks and squirrels and sniff, leap and dart to their hearts' delight.  That is until Madison disturbed what I think was a bald-faced hornet's nest and suddenly the dog bound up to me with pleading eyes that said, "help me mommy."  There were at least forty angry hornets all over her back and sides stinging her simultaneously.  Madison was flinching and biting at them, and in a second both dogs were in agony, rolling over in the brush and biting at their flanks.  Of course these insects attack aggressively when the nest is disturbed, and suddenly there were a bunch on me too.  I know I'm not allergic to stings, I was worried about the dogs getting stung that many times.

So the whole hike I had been discouraging my hounds from swimming, and now we were pretty high up on the ridge off the trail in the middle of the woods.

They were not listening.  They were scared to death at this most unfortunate turn of events, poor things.

I bolted down through the underbrush, grabbing at their collars as they stopped in pain and tried to roll in the dirt which clearly was not working; hornets don't die when they sting so Mad and Chloe were getting attacked multiple times by each insect.  Thirty seconds later I was sliding down an Irene- eroded retaining wall that was now a sheer 6-foot drop of mud with the dogs and I pushed them into the water.  Then I had time to see if the hornet that had stung me was still on my shoulder.  It wasn't.

Afterwards Madison, who had taken the brunt of the attack, did not leave my side.  Her tail was between her legs, she kept stopping to bite at her flanks, and  I could see she was hurting as we made our way back on a different trail that went along the creek to avoid another encounter.  Both dogs soldiered back, not straying from the trail.  They jumped into the car and I sped home and gave them each a Benedryl pill tucked inside a chicken heart.  Of course Madison smelled the pill inside the chicken heart and turned up her nose at it---imagine!  I pushed it to the back of her mouth and held her mouth shut until she swallowed it.  Then she accepted the chicken heart to wash it down.  Yum.  Both dogs got scrubbed and towel-dried.  For the next hour she was shaking, but that subsided and she seems fine now. 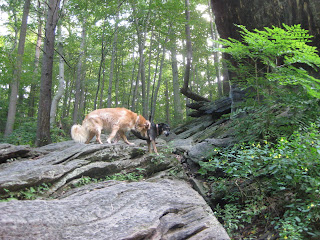 So after taking care of the beasts of course my first instinct was to eat, but I soon involved myself in other things and that passed.  I definitely am moving a lot slower than usual.  Sometimes I feel like I am swimming underwater.  Madison and Chloe are witnessing my frequent stops to sit down or just stare into space with curiosity   After I had vacuumed the downstairs  and did some laundry I was really tired, so I went upstairs and read a bit and took a nap, and my Benadryl drugged hounds were happy to join me--for 2 hours!  My naps are typically 6 minutes to half an hour long.  I'm pleased to let you know, in case you were wondering, that the food you eat really does give you energy during the day.  Yeah I know, duh.

I am doing some housework but nothing too strenuous.  For the rest of the night I will read and relax.  My body feels cold all the time, so I'm wearing a sweatshirt and leggings.  My heart rate is low, but so far I have not been paced much.  I'm thinking tomorrow might be more taxing, but I'm resigned at this point.

So that's about it, I weighed 128 this am, and my saliva PH last night was 7.0.   More tomorrow.
posted by Unknown

More evidence that dogs live in the moment, 'damn the torpedo's..!' and therefore maintain such high levels of sustained happiness. Great teachers. Or they ought to be.