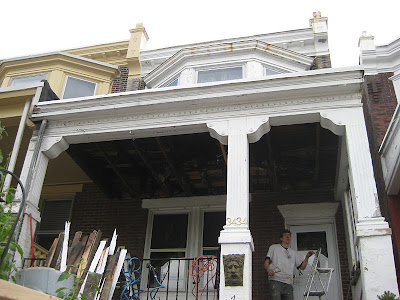 recognizing and accepting when a friendship has run its course


So I finally it the bullet and hired a contractor to demolish the porch on 3434 and add in a bunch of smaller projects that have been nagging at me.  Two weeks ago when they started they pulled up all of the old decking and ripped out the rotted beams in the hopes that they could save as much of the original woodwork as possible before the peeling paint allows the elements to gain an entryway and rot to set in.  So it's been pretty hectic around here.  The contractor needed money and wanted to start the job right away; and I acquiesced, which meant scrambling around making hasty decisions about paint color and fixtures.  Big mistake I won't make again.

When I got myself into this mess I had not intended to act as the Project Manager on the jobsite known as Home when I thought I had hired a professional to perform this service.  All this on top of my already overbooked schedule and with the holidays looming it's no wonder there are a dozen half-written blogposts languishing in the hopper.

So last week at "work" I ordered a new light fixture,  a handsome copper rain chain to replace my beat up downspout aka ladder to the "starling turned squirrel nest".  I was snapping pictures of other East Falls homes on dog walks in an effort to pick my porch floor color (french clay); figuring out the correct grout with which to apply broken pottery mosaics to my outdoor dog shower he was fixing; inspecting the jobsite daily and texting and emailing him to fix all of his mistakes.  I also called the Schuylkill Center for Wildlife Rehabilitation to inquire as to the most humane method of squirrel "rehoming," and this was all just in the first day.

So they had been on the job for four of days when around 8 pm Sunday night I was cooking my food for the week in my fleece PJs when the dogs sound the alarm that there is a large man on the front porch.  I make it to the door and sure enough there is a very tall policeman and behind him are 2 squad cars and a fire truck with lights flashing.  At least the siren was not going.  What the....?

"Ma'am is this your truck?"

He pointed to the ancient red pick-up owned by my contractor, listing to its side in front of my house.  It looked quite pathetic  piled twenty feet high with the remains of my front porch along with some other trash and a couple of wood pallets; its rusty and dented bumpers barely fastened on. Yikes, I did not even notice that he had left it there, but I suppose it could have been worse.  He could have parked a dumpster in front of my house for a week. 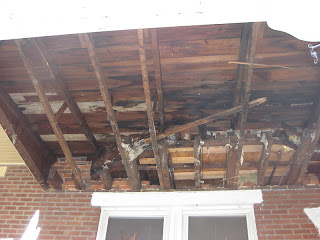 "No, but it belongs to my contractor."  That was the kind of vehicle you never wanted to admit you owned even if you did.  It made the Cherokee I drove for 10 years look like a Mercedes.

"Well it's leaking gasoline."  I looked, and sure enough, there was a puddle of gasoline under the truck snaking silently down the street, just waiting for some smoker to carelessly flick a cigarette butt and initiate an unwitting act of self-immolation.  One less smoker.  3434 is in the middle of the block on a pretty steep hill.  I mean not San Francisco grade steep but I was once told by PBF that is was the perfect hill for running hill repeats.  (And God knows he was the expert since he did nothing all day but workout.)  I swallowed and stepped out to get a better look. Oh boy.

I told them I would call Caleb, the contractor, and of course he did not pick up the phone.  At any rate he eventually called me back, but by that time Philly's Finest had made use of my next door neighbor's dirty kitty litter left out for trash day and had soaked up the spill and split.  Caleb sheepishly told me he would have AAA tow the thing the next morning, and sure enough, as Madison, Chloe and I went out for our morning walk after I got back from the Kroc Center Monday am, there goes the truck propped up on a flatbed: piled so very high with the remains of 3434 and then of course being up on the tow truck, it became the proverbial ship out of water, silently glilding down the empty post-rush hour asphalt river called Henry Avenue towards God-knows-where.  It was quite a spectacle, and I watched these old pieces of my home slowly fade into the distance and felt a sigh of relief lighten up my wry smile.

As I watched I realized that that construction debris floating  away was the perfect metaphor for the dead wood that I had been clearing out of my life in the past 6 weeks.  There have been many changes I've initiated as I mobilize for The Big Move, but more specifically since Thanksgiving I have said goodbye to a couple of friends who had been close to me but who I finally came to realize were causing me more harm than good, and it was time to cut them out of my life before they caused anymore damage, just as I removed those rotted beams on my front porch before the weather could touch the intact boards behind them.  Both of these ex-friends were narcissists, which in my experience seem universally to be men whose fathers left gaping holes in their souls by abandoning them, literally or emotionally, when they were youngsters.

And you know what?  I don't care anymore.  I'm finished being a pro bono therapist for people who won't take responsibility for bettering their damn selves, who, as Susan Gregory Thomas describes in her memoir, In Spite of Everything, can't treat women as equals because they grew up without a regular, involved Dad and thus need to divorce themselves from all of the female authority in their lives by engaging in "overcompensatory masculine behaviors" and "a relatively exploitative attitude towards females." Many were assholes growing up and grew out of it, but the narcissist, with his lack of a sense of purpose and weak self-esteem, often never completely can escape this immaturity.  I've long since rejected this pattern in my romantic relationships and now I'm at the point where that ban has to extend to my friendships a well.

I'm sick of being taken for granted for one thing.  Not that I mind helping out a friend, God knows my good friends turn to me when they want to get an honest opinion about something, but that's just the thing, if honest and directness is a gift I have to offer,  but I can't actually speak the truth to them even though that is exactly what they need to hear, I start to feel stressed and disingenuous.  If I can't help a friend initiate change in his life because I have to coddle the male ego less he erupts in anger or completely disengages, well then, what's the point?  What can my role become to this friend if I can't help him with my wisdom?  Unfortunately I become an enabler too; not quite as blatantly as the sycophants he chooses to date who will allow this behavior to go unchallenged, but close enough that it makes me uncomfortable.

More importantly the time I was spending with them, I realized, I should be spending with someone, whether friend, family, or lover, who appreciates my compassion and concern.  It's not my job to teach them how to treat others: they are old enough to figure that out on their own. Enough said.

As for me, I feel as if I great weight has been lifted off of my shoulders.  Even Janel noticed that I was more relaxed and at ease when we met for dinner and the Queen of the Sun screening last week.  There has been even more solitude than usual, but I can't seem to get enough of it these days. I will spend time with family and friends here and there but I want to keep the momentum I have in the personal growth arena going, and getting pulled in a million different directions this time of year can leave you with plenty of updates to your Facebook photos but not a lot of substance with which to feed your soul when the dearth of engagements in January and February take their toll on those who need others to validate their existence.  Fortunately that has never been my lot.  Happy Holidays.

Happy Holidays to you too!!