when even morphine lets you down: lacerated kidney and ER visit #2

So as I said I was discharged early Saturday night, disheartened about the whole situation, but thinking I could survive 2 weeks off from working out; in fact maybe it would give me a chance to get caught up on my gardening and writing. I took the naproxen before bed but then woke up at 3 am in what I thought at the time was the worst pain ever. I was wrong. The scariest part was the amount of blood I was passing, I mean the toilet looked like someone had been murdered, and there were pieces of something in the bottom of the bowl. Blood clots? Pieces of my kidney? Yeah a little unsettling, even for me. I stumbled down the stairs in the dark, opened the glass grain cabinet that had once housed my sister's stereo in college (remember those days, when you needed a cabinet for all of your audio equipment?) and my trembling hand knocked my stash of orange plastic prescription drug containers off the shelf as I reached for the the morphine that had been prescribed after my shoulder surgery in 2009. I stared at the little blue pill for a second and wondered how badly this thing would tear up my intestines but the pain was absolutely unbearable, so down the hatch it went. Within 15 minutes the pain subsided and I was able to sleep until 8 am. When I got up to empty my bladder it was as I feared: again the water was a deep crimson and there was what looked like delicate little petals on the bottom of my elegant Kohler toilet. At that point the morphine was keeping the pain somewhat under control so I got up, fed the dogs and ate a bit of cereal.

I called up Dr. Mark and he suggested I head back to the ER, but I had no desire to spend a beautiful Sunday at HUP exposing myself to a MRSA infection just to hear that there was nothing they could do for me. On the other hand the Massacre in the Toilet made me wonder if I needed more medical care. I was feeling increasingly crappy. Damn, it was April 1st and I had so many seeds that needed to be planted this weekend; and I had been planning on going to this, but considering I was not supposed to be doing much jostling of my kidney and the Convention Center was the size of a couple of football fields I decided not to attend. Which meant that I would miss a seminar on beekeeping I needed to hear to motivate me to get off my a@@ and get the heck out of Kill-adelphia.

So I called the number for the ER on my discharge sheet, and the nurse who spoke to me suggested I return immediately. But in my experience most nurses are not particularly nuanced in the differences between healthy but accident-prone people and the heart-diseased, obese, diabetic folks they see en masse, so I called up the service for the Trauma Surgeon, Patrick Kim, MD, who had seen me on Saturday and who I had immediately liked.  I knew he would give me the straight scoop.

If you are unlucky enough to find yourself a guest in an emergency room you are invariably graced with a string of doctors, residents, RNs and other hospital staff who interview you, treat you, and interpret your test results.  At a teaching hospital like HUP, many are residents, and most are pretty forgettable.

Although Patrick Kim MD is the Trauma Program Director, meaning the Surgeon overseeing the program and thus had the requisite ego, I could tell immediately that he possessed not only the strong intellect required to procure a position at one of the top hospitals in the country, but also a keen sense of intuition which was lacking in many an A-list doctors. I surmised that Dr. Kim had been briefed by the residents who had interviewed me prior to the Head Honcho arriving that I was a knucklehead who was quite skilled at bashing my body into stationary objects; be they trees, random rock formations, wanton wheelbarrows, or in this case, the ground, and I had been no stranger to emergency rooms in my lifetime. He knew he needed to send a message loud and clear that I needed to let my kidney heal properly.

Saturday afternoon he strode into ER Bay 10, flanked by two residents and one other doctor from the trauma team. I had been reading the New York Times on my Ipad when suddenly there were a bunch of white coats looking down at me.

"Ms. Walheim," Dr. Kim said.
"Hello" I managed weakly. His authoritative voice jerked me back to reality.
"You really messed up your kidney," he stated, speaking without a tinge of levity.
"That's what they say," I mused, my smile an olive branch. He was actually pretty cute, I thought.

We had a 15 minute interview, and he went over the tests and prognosis, and as we talked back and forth and he could see I was intelligent, an athlete committed to a healthy lifestyle, and possessed a strong understanding of medical language and concepts he loosened up, smiled and talked a bit about himself and his wife. The brilliant doctors are quite comfortable with the educated patient.

And that's when he told me I could not do any exercise for two weeks.
"I have to ask this, " I said, "What do you consider exercise?  Because if you don't say otherwise, I will be back in the pool in a few days, " I admitted.
"No exercise means nothing," he said firmly, "Bedrest for 2 weeks. This is a serious injury Ms.Walheim.   If it gets any worse you could get an infection and you could need surgery, so it's up to you."
"No, thank you for clarifying," I hastily said, "I just need to understand the nature of the beast."
"Well you can get caught up on your sleep then, " he said, "because I bet you don't get enough sleep."
I have no idea if that was just a good guess, but I smiled and agreed.
So that was Saturday.

Back to Sunday morning, imagine my surprise when I was able to get Dr. Kim himself to call me back as I sat on the couch in pain and misery, with a profusely bleeding kidney.  He said that if I was able to control my pain at home, I did not need to return to the hospital.  This was great news.

In retrospect, I really don't know if I did too much on Sunday, or if the trajectory of this injury had already been predetermined by the biological domino effect of me slamming my left side into the ground a few days before.  I did get through the day and took another morphine before bed, but somehow, by 4:30 am, the 12-hour pill had stopped working.  The pain was so intense I could barely get out of bed.  I had never quite felt anything like this, not even when the tire of that truck was rolling up my leg and I felt my bones and flesh being snapped and crushed with the pressure.  Surely there was something else really wrong with my kidney.

I called 9-1-1.  My voice was hardly intelligible when the Operator answered the call.  I was sobbing in pain.  I told her that I had a lacerated kidney and I needed to go back to HUP, so she connected me with the ambulance service.  I stumbled around collecting a few things, trying not to upset Madison and Chloe, and only about 14 minutes later there were two EMTs standing on my front porch.  I made it down the stairs and through the wall of barking dogs and opened the door.  I told them about my kidney, stepped out on the porch, locked the door and gingerly climbed into the back of the ambulance.

The EMT at the wheel said to the other, "Which hospital?"
"Temple," he replied.
"We have to go to HUP" I said, grimacing in pain, "they have all my medical records and they already did the CT Scan and x-ray, I don't want to start over at Temple." Plus I really did not want to go to North Philly.
"We have no choice," the EMT said, "we get in trouble if we pass a hospital."

So I apologized and thanked them, but told them to go.  I then re-entered my house and called Chris, which was my last remaining option before I would attempt to drive my own sorry self to HUP.  He answered the phone to my surprise. 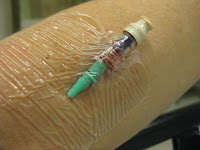 "I will be there in twenty minutes."

So that is how I ended up back in the ER.  When I finally got through registration and back to Bay 11 this time, a wonderful nurse named Kim took one look at my face, looked through my records, inserted my IV and pumped Dilaudid into my arm.  A burning....then the horrible pain evaporated within minutes.  Incredible.  Of course I was also immediately nauseated and actually threw up a few times but they added in Zofran for the nausea and I was passed out on the bed a few minutes later, now a character in a opiate-induced Salvadore Daliesque dreamscape.

Kim was pure magic, she always seemed to be there when I needed more Dilaudid or something to vomit into.  At some point they wheeled me down for another CT scan to make sure nothing horrible had happened, which it hadn't, and of course I threw up again. I was discharged at noon with a script for Percoset and Zofran, and told that the pain would be rough but I had to keep on top of it with medication. Chris drove me to the pharmacy and then I went home and fell into another delaudid induced dreamstate.
He walked the dogs while I slept, then I got up and actually entered the payroll so everyone at Liberty could get paid that week.
I managed to feed the dogs later, then I took my percoset pills and went to bed, thinking the ordeal might be over.  I was wrong.