An man's baritone voice yanked me from the enchanted forest filled with half-monkey half-avian creatures where I was deftly planting seeds that were sprouting into dragon eggs right in front of my eyes; back to the Emergency Room of the Hospital of the University of Pennsylvania in a few chemically delayed seconds. I blinked a few times, reached for my glasses and the white coats came into focus. The power of hydromorphone. I remembered now that it was Wednesday sometime, and I was still in the ER although was about to be wheeled to a private room.

When I was released Monday after having Dilaudid numb the pain of my clotting kidney I went home and collapsed on my king-sized dog bed.  I was instructed to take up to 3 of the supplied Percosets if needed, but again I woke up  in debilitating pain at 2 am and the medicine did not seem to be working at all. I lay there immobile for 20 minutes trying to drift off again, hoping that maybe this was a nightmare, but finally had to swallow another Percoset. A half an hour later I ate a morphine pill in desperation.

Yes I was uneasy as to how all of this medicine was going to interact in my sensitive system, but the last thing I wanted to do was have to go back to the ER again. I mean it was getting ridiculous at this point, and as sick as you are of reading about this, let me tell you it pales in comparison to the disgust I was feeling being in this position for a third time when I was supposed to be getting good medical care. I waited as long as I possibly could, then got up and pissed what seemed like a gallon of blood into the toilet bowl. I could barely get out of bed the pain was so intense. This was truly the worse pain I had ever felt in my life. Strange thoughts tormented me, like if there had been a gun in the house I might have thought about using it just to end the absolutely unrelenting pressure on my left side.

I did not want to go back to the hospital. By I knew I could not stay here like this. I had to get more Dilaudid. There was no way I could drive in this state. I could not imagine who would answer the phone if I rang them at 2 am. If I called an ambulance I would be taken to Temple and would have to start all over, and who knows if my medical insurance would even pay for me to have all those tests again, most likely not. As a last resort, I called Chris again, and to my surprise he picked up the phone. I'm sure he regretted it, but there it was.

So that is how I ended up in the ER for the third time in as many days. Only this time the pain was an 11 on a scale from 1 to 10 and I needed Dilaudid immediately. I breezed through security as the guard recognized me at this point, and I told triage the situation, my face grimacing in pain.

"You still have to register over there," the woman said, unmoved by my obvious discomfort.

"I'm not registering," I said with more than a little irritation, "I'm in tremendous pain from a lacerated kidney, and I've been here three times in three days because they keep discharging me without the proper pain meds.....my information is all in the system, my chart is sitting back there, I need to get back there now," I said through gritted teeth.

Well let me explain that when your walk into an inner-city ER you don't get a lot of sympathy when you insist on being expeditied to the hydromorphone drip. I don't think it matters who you know, how many times you've been there, or how high you think your pain tolerance is; suddenly you are one of the weak asking for help; and those who have the power to make you suffer cannot resist the urge to make you grovel.  I had to wait 20 minutes while they logged me in and printed out my bracelet.  I lay across three chairs, moaning loudly. 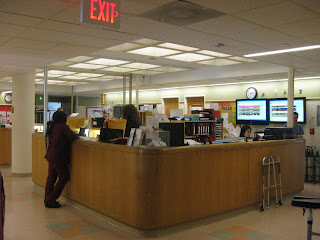 I finally was summoned from the dimly-lit waiting room which only needed a coat of red paint to be mistaken for Hell. I was whisked through the double doors, blinking my heavily lidded eyes as the brightness of the ER bay came into focus, the beep of monitors as ubiquitous as crickets chirping on a summer day, in yet another scene in this surreal drama that was playing out as a result of a leisurely afternoon mountain bike ride. As my eyes continued to adjust to the light the cast of doctors, nurses and staff whizzed by my chair as I was wheeled into Bay 11, wanting to tear out my hair in agony. 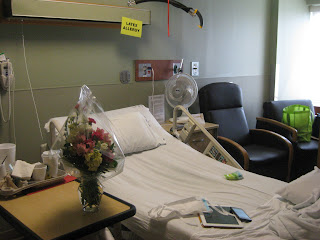 Then I had to tell the stupid story again to five different people (yup I was pretty irritible by now); and why someone so "youthful" has a pacemaker (second degree heart block);  show them the best vein for the IV (left arm); and all the while suffering through unspeakable pain.  Finally the hydromorphine seared into my arm and I felt my vessels gradually pulling coolness throughout my battered body.  With each pump of my heart the medicine spread its icy web until the numbness had enveloped me, and in a few moments I was passed out on the gurney. I was an insect being spun, spun neatly and tightly by the morphine spider so I could easily be consumed later. But at least in this pseudo death there was an absence of pain.

So since this was the third ER visit for the same laceration I was admitted for an extended stay.  As one doc succinctly put it, "Pain control is a stupid reason to be admitted to the hospital," and I nodded appropriately. Of course if I were not on drugs and only half conscious at that moment I would have replied, "yeah, I agree, but thats pretty much your fault, since my diagnoses has not changed and I have not been given the appropriate medications to be able to rest at home and avoid this grotesque hemorrhaging of healthcare dollars."  I suppose sometimes the morphine muzzle is not such a bad thing.

At first I was in the room with another woman but because of my latex allergy, they moved me to a private suite, which was really sweet, because all I wanted to do was rest without having to listen to someone else's visitors or the detested noisebox known as a television.  My mother arrived and stayed for hours God bless her, and between my dreams a constant stream of docs from trauma, urology, emergency medicine, and even the pharmacist stopped by to check in and review test results. Th ER x-ray had showed pleural thickening in my lung, so I got wheeled downstairs to get an ultrasound, and it turns out that I had broken two ribs on my right side in some other fall, so those were healing and there was no pleural thickening to be worried about.

So one more note, you can imagine that a semi-raw nutritarian like me would be a bit unhappy with the food served in the hospital.  I knew it was going to be bad, but I have to say I found it literally appalling that an institution supposedly dedicated to making people well would serve this swill.   After I refused to eat any of it, I told the irritated staff member who removed my untouched tray not to bother bringing me any more meals.  It turns out that a few of my employees from Liberty Flooring were working on the floors in the very hallway where I was admitted, in fact, they had just finished the room and I was the first patient in it.  So since my guys were working two doors down I was able to get our Foreman Mots to wheel me down to the Cafe, where the offerings were a bit better.  I got some bland oatmeal and some fruit or something like that; it was pretty forgettable but not quite as bad as the crap served on the tray.

By the following day I was nausous, depressed, and had an incredible migraine from the drugs and I knew I had to get the hell out of there.  They finally discharged me mid-afternoon, and honestly I never even used any of the pain meds after I got out of the hospital. I took some Tylenol that evening and that was the end of the chemical storm, and thankfully the end of the blood clots coming out of my kidney and down my urethra. The florist dropped off a bouquet of flowers that someone had sent; the card only read, "somebody who loves you."  I have no idea who sent them, but they did brighten an otherwise dismal day so if you did send them please step forward and identify yourself so I can thank you.  Unless of course you are someone who I have or should have filed a restraining order against. 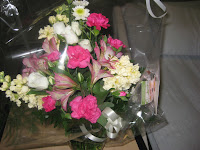 I did wait the prescribed two weeks before I did any exercise, and it was slow going at first, sort of two steps forward one step back, but I can say a month later now that I am back into the full swing of things.  I even took a spin in Belmont last Thursday on the Yeti and came upon the tiny little log that had been my undoing.  I stopped, gave it a look of respect, and continued on, the dogs prancing about me with their usual enthusiasm.  Which is really what life is all about I suppose.  Certainly this life has been about acknowledging that living is what happens between and through my glorious mishaps, rather than a state that will materialize once I have put them all behind me and reached this milestone or that one.  I'm still hoping for a bit less drama in 2012 though.  Just a bit.
posted by Unknown

Wow Andrea. But, if it helps, what an excellent post; if somehow it makes the excruciating pain all worth it. Wow.

You are a dramatist. There is no "less drama" for you. But far less painful, I hope so. Maybe less dangerous, too, but you're the kind of hard charger that generates risk like heat from flame- there's no avoiding it- it is what it is by nature. Keep your elbow, knee, fore arm and shin guards on at all times, plus a padded vest, and always wear your helmet, including miner's light, even in the bathroom or when gardening or grilling outside. You never know when disaster will strike for whirlwinds like you. Or you could slow down, take precaution... Naaaah. Fingers and toes crossed for you...

I guess you will be happy to know I raced my bike the past two weekends and took my motorcycle out of storage then. I think the bad luck streak has ended.