how to kill an infiniti part one and two


There is something about Thursdays. That's the day of the week I get into work before sunrise, leave at 1 to pick up the raw milk, eggs and chicken parts from the farm, food shop, do errands, and then take the dogs to Fairmount Park for a run or mountain bike ride. I finish early and have the whole night to do whatever I want: chores, cooking, writing, or lately maybe even meeting some stranger for expensive champagne at some swanky downtown hotel.

I was heading back home from Cadence with my repaired road bike on the back of the car and it had started to drizzle.  I was meeting one of my employees who had fought an hour and a half of traffic in the opposite direction from where he lived to meet me at my house to help me put my air conditioning units in my windows;  now that the two male persons who usually help me with this task have been conveniently ousted from my short list of friends.  He was young, and I had offered him a case of Blue Point Brewery's Toasted Lager, his favorite.


Actually "help me" is a bit of a misnomer as all I really do is clear a path in the basement so the chosen male person can carry the AC units between all the crap I have amassed in my 10 years at 3434. I become a cheerleader during the process, as I can't handle those unwieldy things myself. I go to the gym to lift weights for God's sake....and to keep in shape so I can lure young men to help me move heavy objects. God help me when I have to move whatever is left of my crap across the country to the new farm.

As I drive along Henry Avenue towards East Falls I passed through the intersection at Hermit Lane and there was a road to my right, Barnes, that cars had to turn across my lane to enter. They had their own lane, and there was a lot of traffic along Henry Avenue going both ways. As I rounded the bend in the road there were a few cars turning in front of me and I slowed in case some jerk decided to make the jump as I got closer. Two cars did, and next in line was a blue Ford Taurus. From several hundred feet away I saw him inching forward. But then it seemed he saw me coming because his car stopped; so I took my foot off the brake and proceeded on my way. To my shock and horror he decided to gun it across the intersection as an afterthought, obviously forgetting he was driving a car whose power-to-weight ratio made it too heavy to get out of its own way.

I slammed on my brakes and steered the car into the only place I could go, the oncoming traffic, which luckily also had two lanes and there was no one coming in the one immediately to my left. I did everything I could to avoid a collision, but his Taurus circa 2005 was too geriatric for its owner's aggressive driving so his rear hit my passenger side light, bumper, and quarter panel and smashed up my pristine little car quite nicely. I was PISSED.

I glanced to the side to see that he had indeed pulled over on Barnes street and thus I would not be compelled to unleash a high-speed chase through the streets of Roxborough (you scoff, but I did that once), then I nonchalantly turned my car, its molecules still jostling  from the impact, 300 degrees and pulled up behind him on the side street.  For a few seconds,  I was the only vehicle moving, as the entire intersection had stilled to a stunned silence from that telltale smash and crunch of metal that every driver hates to hear.  I jumped out of my car and strode up to Mr. Taurus.  After I told him what a complete idiot he was I calmed down and called the police, my fingers trembling as I hit my phone's touch screen and wondered how best to play it to the 911 dispatcher so as to get a response.   I will spare you the details of the ineptitude of the operators on the phone but since half the dispatchers don't know the new policy I will spell it out for you here: unless there are injured parties or a car needing towing from the scene, the PPD does not show up, even though for the first hour they might even tell you they are on their way, which is why we waited there so long.

The best part about this story is that after I called back and got the straight scoop about the policy Taurus agreed to lead the way to the local District 5 station. As I followed behind him, he rolled through not one but two stop signs. However the piece de resistance was while making the left into the police station, he cut in front of a car going straight just as he had done to me.   The exasperated driver who had the right of way even put his hand through his sunroof and gestured to Taurus to "just go for gods sake."

So that was the first one. My insurance company paid to have my car put back together less my 500 deductible which I should get back once it is determined that the liability for the accident should rest squarely on Taurus, whose name, it turns out, is actually Tony. This might have been accomplished by now but it takes several months for the Philadelphia police department to send out a copy of the police report. 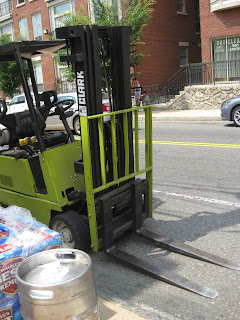 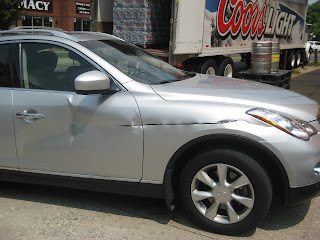 Less than a month later I was minding my own business driving back to my house, again on Thursday, and as I was ambling along Ridge Avenue under the twin bridges I had to slow down because there was a large Coor's Light truck blocking my lane.  John Kenney, the owner of East Falls Beverage, who has, in fact, delivered kegs to 3434 parties a few times (remember the 8.2% Troegenator and the mayhem that keg engendered?) was having trouble with his little green forklift and it had gotten stuck on the curb.  He gassed it  to try and release it at the very moment I was slowing to a stop behind the truck he was unloading, and the vehicle lurched forward right into my path.  The tines of the forklift shown in the picture above sliced open the entire front quarter-panel and passenger side door of my car  like a can of sardines, yep, the same side that had been replaced a few week's earlier.  I was incredulous.  I got out of the car muttering something to John along the lines of I had just gotten the car back from Infiniti of Ardmore and this could NOT be happening.
Well, I will spare you the details, but because that happened the week before the July 4th holiday, it seemed to take forever for his business insurance to admit liability and send the damn check, I actually had to pay out of pocket to get my car back.  I even had to race the Summer Sizzler by shoving my Yeti sideways into the back seat of my rental Nissan Altima.  In 98 degree heat.  That sucked.

So the dogs and I are happy to have the car back for our frequent trips to the park, but I have to say this is just another reason I am looking forward to living somewhere with a lot less population density.  I'm really running out of reasons to stay here anymore.  I'm trying to be Buddhist, and experience everything in my soon-to-be-former-home of Philadelphia with a Beginner's Mind, but it is really challenging now, because I am just so impatient for "what's next" to begin already.  ONWARD.