So today was only the third day of this experiment, and I felt a lot better than yesterday.  I actually felt somewhat normal, which I did not expect.  I decided to go the semi-elemental route because I could not stomach any more of the amino acid powder.  That stuff is clearly meant to be ingested via a feeding tube,  bypassing the taste buds.  Mixing the coconut oil in warm water and then adding in the scoop of casein and shaking it up produced a concoction that tasted vaguely like cappuccino foam, and with the addition of some salt (you need to eat a lot of salt while you are keto-adapting as your kidneys excrete a ton of sodium) it really was not that bad at all.  This I can do, I thought as the first one went down the hatch.

So I got up and went to the gym and actually had a pretty good leg workout, not nearly as lengthy as my normal one and with all of the plyometrics removed (there was no way I was getting any explosive power out of these legs today) but I got through it.  I also did shoulders and core, and I started with my usual half an hour on the stationary bike while I read the NY Times.  One thing I noticed with running and cycling while in this ketoadaption phase: when I first start I feel weak, but if I persevere and warm up a bit I am able to maintain an easy endurance pace for the duration of the half hour, although not without frequently thinking about quitting in all honesty, and that's not at all like me.

I got home, took the dogs on a very long walk as it was a beautiful morning, made it into work at a decent hour and got through the monotony of that without snapping at anyone.  Mind you my limbs still feel heavy and I don't have my usualy energy or zest for sure but it's not insufferable like the last few days because my brain does not feel like it is constantly fighting my limbs for the available glucose.

My blood ketone meter arrived, and today my level as at .8 millimolar, which I was super psyched about since according to Phinney and Volek keto-adaptation for exercise starts to occur at .5.  Optimal range for an athlete would be in the 1.5-3.0 range.  So I feel like I am well on my way. 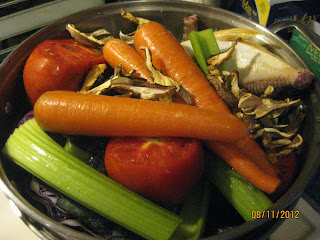 As for my weight, the 5 pounds I had gained the week I was on antibiotics is already gone, in fact I've lost 7 pounds in 3 days.  You do lose a lot of water when you first embark on a low-carb diet, and this one is hypocaloric and semi-elemental to boot.  Not to mention that I have my last liquid food at around 2:30 pm, and then don't eat again until 5 the next morning, so there is a healthy dose of Intermittent Fasting in there too.

Tonight I made fish broth, to substitute for the bone broth recommended on low-carb diets as well as on the elemental diet.  All those vegetables and fish provide needed nutrients I am missing while ingesting only coconut oil and casein, and when you have not eaten in half a day and your stomach is growling a hot cup of fish broth really does do the trick.  Trust me.