the ketogenic elemental diet day one 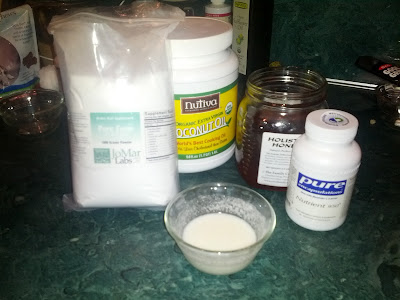 So I had been fascinated by a paper published in Nutrition and Metabolism in August of 2004 called, "Ketogenic Diets and Physical Performance" by Stephen D Phinney who has been publishing books and papers on the benefits of low-carb diets for 35 years. Here is the abstract:

Impaired physical performance is a common but not obligate result of a low carbohydrate diet. Lessons from traditional Inuit culture indicate that time for adaptation, optimized sodium and potassium nutriture, and constraint of protein to 15–25 % of daily energy expenditure allow unimpaired endurance performance despite nutritional ketosis.


Dr. Phinney is probably the pioneer of ketogenic diets for athletes, and I just finished reading, The Art and Science of Low Carbohydrate Performance, which he co-wrote in 2012 with Jeff Volek. I have been interested in the manipulation of dietary carbohydrate dating back to my bodybuilding days when I read and re-read the late Negrita Jayde's book, Sliced, and drove my Italian mother crazy with my sudden dietary about-faces. This was back in the late eighties, and I was a skinny little college freshman who wanted to pack on some muscle mass but was frustrated even back then with my inability to "get cut." As my chosen sports evolved from track, lacrosse, and ice hockey to mountain biking and road cycling, I noticed an increasing intolerance to many carbohydrates as I became an elite athlete and "had" to eat more and more of them due to the demands of my training and racing. But eating a lot of carbohydrate- rich foods, even the healthy choices I have always preferred, has always made me feel lousy, gain weight, and suffer from GI consequences and impaired performance in races. I knew there had to be another way; I just did not buy that you had to glut yourself with sugar to feed the glycogen train to be able to train and compete at a high level. So it seems I have always been sensitive to carbohydrates, but I was fed the party line by my various coaches when I signed on to elite mountain bike racing, that is, to succeed in a sport where you were often burning over 2000 calories on training rides and races, you had to constantly feed the machine, and the fuel that you must use is high-glycemic index carbohydrate for the most part.

A few years back I read Stu Mittleman's book, Slow Burn: Slow Down, Burn Fat and Unlock the Energy Within, and that prompted me to begin gradually experimenting with removing the starchy carbs from my diet. I had long ago stopped eating bread and pasta as I deem them junk food, but remove the healthy grain dishes I (and my frequent athlete dinner guests) had grown to love, such as this or this from my diet, and not suffer from impaired performance? Enter Bob Seebohar and his book Metabolic Efficiency Training, which I bought while I was still being coached in 2010 and unsuccessfully tried to get my former coach to read. As a CAT-1 cyclist who clearly has no problems ingesting carbohydrates during events, he was not particularly interested in a lesson on the benefits of low-carb performance, even if the knowledge might benefit some of his athletes. At the same time I was having trouble getting my body more metabolically efficient using the methods that Seebohar recommends because I was so severely hypothyroid and my body was just not burning fat. In fact my body was not burning enough of anything to even raise my body temperature above 96.5. But that's another story.

At about this time a year ago, I was in the middle of searching for someone who could help me with my hypothyroid condition, as there were times when I was exercising and not eating much at all and I could not lose an ounce. So it was not hard for me to agree to remove any energy-dense high calorie foods from my diet because of my strong desire to get back to a leaner version of me. The research led me to study the Paleolithic diet, and I read most recently, The Paleo Diet for Athletes, A Nutritional Formula for Peak Athletic Performance by Loren Cordain. The problem with Paleo for me is that I do not eat meat, and I have no desire to start eating meat again until I am living out West and have access to freshly killed elk or the like; there is just no way I am eating factory-farmed anything. Luckily I still eat free-range eggs and wild-caught fish, but you can't eat many of the vegetarian sources of proteins on a Paleo or low-carb diet, because they often are accompanied by carbohydrate; for example tofu, seitan, tempeh, beans and nuts all have their fair share. The other issue is most are hard to digest, and while I was digesting beans just fine for awhile, since I became afflicted with SIBO, I really can't digest anything.

Anyway, like I said I was unsucessful in turning my body into a fat-burning machine in my attempts prior to this (although I did succeed in improving its metabolic efficiency somewhat) because, most likely, I was still eating too many carbs. I was eating these carbs in the morning before workouts just as recommended by Seebohar and even Cordain in The Paleo Diet for Athletes, but unlike in 2009, when I was not suffering from Wilson's Syndrome and perhaps because I was still eating meat, my timed carb doses were just enough to keep me from switching to fat-burning even at the lower endurance intensities. Anyway, the bottom line is I had a unique opportunity as I stated in the last post due to my impending "foodless fortnight" to control the exact number of calories and even the exact ratios of fats/carbohydrates and protein I was consuming. I could use the opportunity not only to restrict my calories but also to restrict my carbohydrates to jump-start the keto-adaptation process so I could perform efficiently on a low-carb diet once I started eating food again, even as an elite cyclist, runner, swimmer, and weight trainer. This controlled experiment was just too tantalizing to pass up.

So I shelled out $150 for the amino acids, and stocked up on Nutiva Coconut Oil and raw honey from the farm. I worked up a 71% fat, 9% carb, 20% protein "diet" which was nothing but....are you ready for this? Coconut oil, amino acids, and a teaspoon of honey. Three of those per day, plus some fish broth, a bottle of my homemade kombucha, and unlimited amounts of unsweetened tea.

So back to Monday morning, Day One of the keto-elemental diet. I got up at 4:30 am as usual, and by the time I got downstairs dressed for the gym it was 5. I mixed up the amino acids with the coconut oil and honey, and then decided it would be a good idea to add in some water and just drink it down, as I read the amino acids taste dreadful. So I walked over to the water cooler and stupidly added some chilled water, not remembering that coconut oil solidifies at temperatures below 76 degrees. So now I had to ingest clumps of cold coconut oil barely mixed with these terribly bitter amino acids and a trace amount of honey. It was totally disgusting, and it was all I could do not to gag. But I got it down, my eyes watering with the pure alienness of it all, and headed off to the gym. Normally, I would have had a cup of gluten-free oats with a scoop of raw protein, almond milk, some homemade coconut yogurt and fresh raspberries. I know, bummer.

Once there I really had no trouble getting through a full Monday workout: half an hour on the stationary bike at endurance pace, a little over an hour lifting chest, biceps, core, a hard 20 minute run on the treadmill and 15 minutes of stretching and using the foam roller on my legs. I still had plenty of glycogen in my system from yesterday. I would be lying if I said I did not "carbo-load" a little on Sunday, considering the experiment I knew I was about to undertake. Hey, I'm human after all. That slice of raw chocolate pie with walnut-coconut crust was pretty special. Ah the memories.

Towards the end of the day I did get a bit tired and irritable, but that has pretty much been how its been anyway since for the past 10 days I have been on the antibiotics, which really fatigue me especially at the end of the day, so it could have been a hangover from that.  And to be honest, sometimes my job just irritates me, but you knew that.

One day down, thirteen more to go.

Posted with Blogsy
posted by Unknown