the ketogenic semi-elemental diet day 7: day one of zero carbs 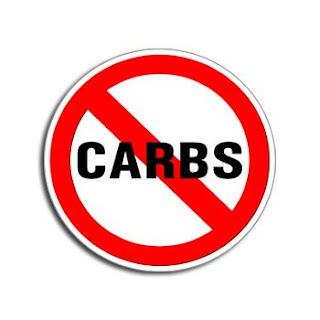 Today was my first day of zero carbs, and I mean zilcho, because as you remember the only thing I am eating is coconut oil and unsweetened casein, 1650 calories, 79% fat and 21% protein.  So it's pretty easy to make sure you are not cheating when you are only swallowing coconut oil with a little protein powder in it.  Yuck.  So far I seem to be tolerating the casein well, which is always a question for those that cannot digest lactose. It turns out most of the lactose in milk is in the whey, not the casein, which is the milk protein. 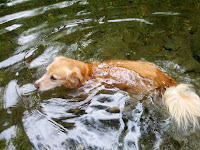 I felt like crap for the first half of the day, in fact I could not bring myself to get on either bike, so I took Madison and Chloe to the Wiss and I trudged along clumsily as my limbs seemed to have forgotten the normally smooth motion of walking. It was all I could do to keep them in view as they galloped up and down the gorge chasing chipmunks, squirrels and the scent of deer with an exuberance I wished I could emulate.  We did discover a new trail which was exciting for all three of us.  When we returned to 3434 I could barely stoop down to wash and dry their furry bodies and I ushered their wagging tails into the house and slowly, painfully brought them their bowl of ice water.  Yes, ice water, that's what my hounds get after a hike in the heat.  Ice cubes are ice cream for dogs in the summer.

It was a glorious day, sunny and bright with low humidity, and all I wanted to do was work outside in the garden, but I was tired; my lower back was sore; my limbs felt like cast iron weights hanging from my frame and my legs burned like I was climbing the Monster when I ascended a flight of stairs.   Finally I took one of my 10-minute naps and afterward, suddenly, I felt somewhat normal.  No joke, I was such a total switch: I was much less tired, my mood lifted, and I actually was able to get some chores and blogging done.  I tested my blood ketones and they were up to 0.4, of course once AGAIN I had to use two strips because of the NovaMax Plus meter's faulty indicator which pissed me off but it does not take much to piss one off in this low-carb state.

I have not been sleeping well on this diet, either from the little bit of caffeine I drink in the morning or more likely from some metabolic shift that happens in ketosis.  I read on the forums that this is common for people trying low-carb.  Perhaps it is because I am eating only 1620 calories a day and still working out, so that is way below my maintenance level which I estimate to be somewhere in the neighborhood of 2500 calories a day.  Most of the time I am not hungry but on 1620 calories I do wake up in the middle of the night with a grumbling stomach.  It's not like I can sneak downstairs and open up a bag of Fritos.  My menu choices are coconut oil....and casein.  Kinda blows the whole midnight binge urge.  I never do that anyway.

This was the first day in many months that I did not have a bottle of kombucha, and it was sorely missed, but I really think that there is enough sugar remaining in my brew to keep me from becoming keto-adapted, so I suffered through it.  All in all, it was not a completely fruitless weekend because I did do a lot of cooking even though I can't eat the food yet.  Jack, our truckdriver, showed up at the office with two gigantic boxes of home-grown organic Jersey tomatoes from his garden again and I had to dehydrate them or make sauce or they would all have gone into the compost.   Anyway, I'm not sure how I got through it, but tomorrow, back to work, sans kombucha, my happy drink.  I swear the surge I get from the kombucha is the only thing that gets me through the workday sometimes, so that's going to be rough.  Not that any of this is a cakewalk.  Speaking of cake, when this all over I'm going to have to splurge a bit.  September is going to be the month of the restaurant:  Michael Schulson, Jose Garces, Stephen Starr and Michael Solomonov here I come!

First 1 hour trail ride on the diet. Felt really good except for some gnawing in the stomach at 40 minutes or when I my HR hit the 160s momentarily. I ate an extra handful of grapes with lunch before the ride. Stayed in the aerobic zone 95 % of the time.

Which diet is that exactly David? Did you cut out all dietary carbohydrates or are you eating Paleo? This diet where you posted your comment was a liquid diet consisting only of fat and casein, or milk protein.